TV Review: Big Brother 14x03: Kicking Yourself in the Face 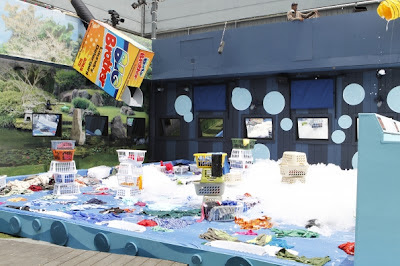 ML- It's fitting that Ian wound up on Team Boogie, because both of them to this point have been kicking themselves in the face in the game. One, Ian, has literally done this in an attempt to appear fun and likable and not weird or creepy at all. The other, Boogie, has done so by making too many ties to all the wrong people.

Boogie had a "good" thing going with Dan, in the sense that they were aligned, not in the sense that they had any control over the house this week. He screwed that up when he sold Dan out to Britney and Janelle, echoing their idea of knocking out Kara in an attempt to remove Dan from the house entirely. Everybody knows Boogie's game, his strategy, and not to trust him.

Everyone except Shane, apparently, who seems to be humoring a deal with Boogs that would keep Frank in the house in order to ensure his own safety and shift the "physical threat" target to Frank.
There's a strategic merit in making a deal with an unlikable player- if by some act of Grodner that person gains power, they won't forget your loyalty. Shane isn't all (sunburned) muscles, he's got some game, too.

Team Blonde Ambition, Britney and Janelle, reveled in their handling of the other coaches and newbies alike. It's great to see them working together, as both have proven to be die-hard gamers in this house. Boogie approached Britney to sniff out whether she and Janie were working together, which Brit handled perfectly. Boogie threatened, however, that if Joe from Team Janelle wasn't nominated after the Veto was used, "the line would be drawn". Neither she nor Janelle succumbed to Boogie's meddling, and it appears their bond was strengthened because of it. Their players took a backseat this episode, something I'm sure many die-hard fans may not care for, but those watching for familiar faces loved all of the coach talk this week.

Before the PoV challenge, we saw Shane consider deals with both Frank and Kara if he were to win, so it was pretty obvious that he'd take the gold in the competition. The gold in question amounted to only $1.30, the amount of oversized change the house guests had to locate in a big, bubbly laundromat set and toss into their coin slot. JoJo, the host for this competition, said where she comes from she knows a thing or two about laundering, but I'd bet she knows more about putting things in coin slots. ZZZZIIIIIINGGG!!

It was neck-and-neck-and-neck between Frank, Shane and Willie, while Wil, Kara and Danielle quickly fell behind. It came down to a matter of seconds as Shane narrowly defeated teammate Willie for the first PoV of the season, injuring his back in the process. Of course, the teammates did a happy dance in the HoH room after the victory and weighed their options. Shane, however, was adamant about playing his own game.

He made the smart decision to keep blood off of his hands and let the chips fall as they may by not playing the Power of Veto. Now it's Frank vs. Kara (or, Boogie vs. Dan) tomorrow night as one houseguest is evicted, live. Personally, I'd like to see Frank stay, considering he was my pick in the premiere to win it all, but that inherent likability/"winningness" quality is so palpable that it will not sit with the other competitors in the house. It all comes down to who the bigger threat is: Frank or Dan.

What did you think of the episode? Whose accent attempt was better, Danielle's or JoJo's? Do you have any hidden talents that double as metaphors for your Big Brother coach's poor gameplay? Who do you want to go home this week? Hit the comments to share your opinions, ya'll!


Note: Like every other sane individual, I'll be going to see The Dark Knight Rises at midnight tomorrow, and may not have the Big Brother recap post up immediately following the episode (or the Louie review, for that matter). It'll go up at some point! In the meantime, keep calm, carry on, and go see Christian Bale kick some mumbly butt.

SPOILERY LIVE FEED UPDATE SPONSORED BY FROOT LOOPS AND DIGIORNO
Basically, every cross-team alliance created thus far in the show has been nullified. Everyone on Team Janelle has now aligned with Team Boogie, forming the "Diversity" alliance. Many have also begun showing their jealousy of Janelle, including Britney, Wil and Ashley.

Britney told Willie about her suspicions of the Coaches entering the game. Afterwards, Willie called all 11 newbies in the house together to share that information and create a mob mentality against the coaches.

Willie mocked Wil's effeminate voice and mannerisms to Frank, who told people about it and, by the time it got back to Wil, the story was that he used a homophobic slur. This prompted an actual racial slur from Willie(directed towards nobody of that race), all of which came to a head when Willie and Frank had a blow-up in the backyard. Shocker!

As for who is going home, it all rests on the shoulders of the most unlikely contestant- Ashley. She's not sold on the Diversity alliance, which is targeting Kara to save Frank. Right now, if she sides with Diversity, it will be 5-3 Kara going home. If she joins with the other side (Willie offered a F3 with JoJo and Ashley), it'll force a tie, and Willie will surely send newfound enemy Frank home. As fast as things have been changing, it's anyone's guess what will happen tomorrow night.

In terms of HoH, Dan is advising his girls to throw the competition to keep targets off of their backs in this BB bloodbath. They're all expecting a quick, true/false style HoH. If that's the case, anybody can win.
Posted by Dual Redundancy at 6:11 PM