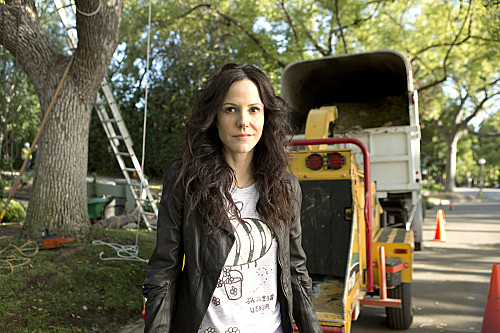 ML- We got plenty of tastes of freaky relationships tonight, so this review will be in the form of an advice column to the characters:

Nancy & The Rabbi: We found out the creeper staring down at Nancy last week was the same Rabbi guy who met with Andy in the hospital. Coincidence? I think not. Nancy, you've ruined the lives of dozens of men (literal figure), but this is the first that really has me worried for you. Sure, he got you to dispose of all your golden parachute weed from Kiku, and has been spreading his cleansing message to all the Botwins he comes in contact with, but I still wouldn't trust him. That being said, he'll be the guy who Nancy finally forms a loving bond with and they live happily ever after.

Andy and SUGAR FROM SURVIVOR COMPLETELY NAKED: I'm not sure if Sugar's character had a name, but she definitely had a smokin' bod as she rolled around the rink. Andy pulled out some Charlie-Kaufman-in-Adaptation-level philosophy on his evolution and karma in regards to women always stripping down for him. Sugar said it's because he's always talking about the women in his life and never himself, and because her girlfriend was out of town, and because she had no more Law & Order on her DVR. Andy, you work best when you're trying to impress a girl, not fending the crazies off. Go see what Alanis Morisette is up to, perhaps she's forgiven you and can make a guest appearance before the show ends!

Jill and Doug: Ew. The void Jill couldn't fill with big savings from extreme couponing was apparently filled by Doug, a horrible decision by all accounts. Yes, she may have gotten Revenge on Andy (capitalization intentional, as Jennifer Jason Leigh will be playing Emily Thorne's mother on Revenge next season), but at what cost?

Shane and Angela: Double dates are only okay when they're with people your own age. Going to his boss' house and listening to him drunkenly complain about things, in a scene so derivative of SNL's "Drunk Uncle" Weekend Update Sketch that I almost expected Seth Myers to pop out and be smarmy, is not romantic. It worked out, though, when Angela made a move on the balcony. The end justified the means here, Lil' Botwin.

Silas and RJ: This came out of nowhere- one minute they're bonding growing weed, the next RJ is trying to get Silas to go down on him, spouting some business about how it will help him express his manliness. Then RJ freaked out and stole all of the product, on account of him being off of his meds? The whole thing was too weird and didn't add up to the rest of the episode. I hope this isn't completely abandoned next week.

Celia and Dean: Just kidding, they're not back on the show. But wouldn't that be great?

Posted by Dual Redundancy at 8:20 PM