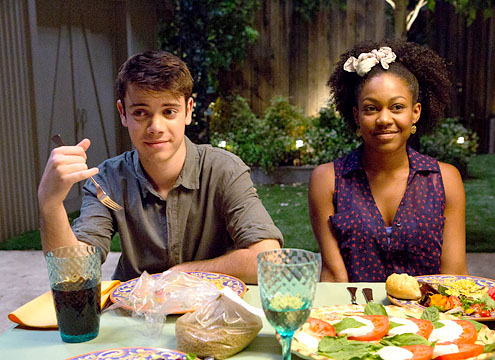 Warning: This article contains plot spoilers and some language suitable for only those mature enough to be watching Weeds. Reader discretion advised.

ML- For once, Doug's storyline really hammered home the episode's theme, and also what has been lacking in this home stretch to the Weeds finale: Different day, same shit.

Doug was shocked to find a heaping pile of it on his daily newspaper, and he immediately blamed his neighbor's prized pooch. When it happens again, it spurs a war in which Doug spray-paints the dog, the neighbor calls the police, Doug outsmarts them, and the neighbor sends a bag of feces right onto the table during Nancy's family dinner speech. Hey, at least it's better than a bullet!

I take this as a strong metaphor of the problem currently plaguing Weeds- much of the same old stuff is happening. Nancy is reverting to her drug kingpin, bad mom ways. Andy is back to fawning over her. Silas is doing weird stuff with his lady friends and growing weed again. Only Shane seems to be progressing in an interesting direction, which could spell trouble if he does, as RJ the headship employee warns Silas, goes wild with power and rats them all out.

But after 7 seasons, double as many locales and triple the twists and turns, the show has become like an elderly person in the slow crawl of death. Occasionally there's a spark of life, but no, the end is near. We're all hoping for a spectacular finish to, at best, a hit-or-miss series. Perhaps this is Jenji Kohan's way of letting us know that the show isn't going to stop being what it is, love it or hate it.

I lost interest quickly in Nancy's backslide into the drug game by helping Kiku get out of a jam and finding Demetri at laser-tag. Andy and Jill breaking up over him wanting to cook Nancy a meal was plain stupid. Again, I echo that Shane's advances with his girlfriend (asking her to dinner while grabbing her boob) were the only fresh parts, because we've never really seen Shane, or anyone, with a normal significant other. He really may be the only one to escape unscathed.

Mary-Louise Parker had some good stuff again this week, particularly crying after accidentally calling Stevie "Judah", which isn't even his father's name. The woman has three children from three fathers, and I think that is finally starting to dawn on her. She doesn't want to be a zombie of a mother, she wants to be better. Funny, as in scenes for next week she's tempted back into her old tricks.

Back to the metaphor at hand, the episode ends with Doug checking the surveillance tape he set up, only to find the phantom pooper was Doug himself, under the influence of Ambien. What does this imply for the characters and the show going forward? Drugs are the reason we do dumb things, or at least the same shit on different days? Or that it's these characters that are so well-defined now that there's little excitement left for the audience? The writers probably mean the former, but I'm still giving the latter some thought.