TV Review: So You Think You Can Dance: "Top 20 Perform" 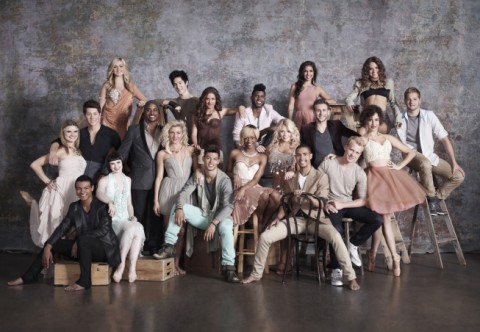 DA- As the announcer from tonight's top 20 performances would say "this is..."

Oh sorry I forgot I was supposed to be doing my job. What I meant to say is "this is the So You Think You Can Dance recap!"Since SYTYCD is different than most of the things we will review on this blog the best way to recap a SYTYCD episode, in my opinion, is by looking at each performance separately. Now since we had to fit 9-second introductions, 10 short dances, and a large amount of compliments judging from our judges, which included High School Musical director Kenny Ortega, let's get right to it!

The episode begins with a Mad Men style group number set to "Architect of the Mind" choreographed by Christopher Scott. While it started out promising, especially with the music by Henry Muzzey, nothing really happened or stood out. Like early episodes of Mad Men, you were caught starring at the screen waiting for something exciting to happen amongst the beautiful backdrop. They kept to their own desks and I saw the group of them working in their own cubicles and not with the overall group.

Witney & Chehon: Witney & Chehon started the season in this Louis Van Amstel samba number off on a weak note. While both dancers tried to bring life to the routine, nothing special made it stand out. Louis was looking for a "masculine dude" to  perform this number. However as soon as those words entered his mouth Chehon falls into a spilt in his jazz shoes. Enough said. C+


Tiffany & George: Sonya Tayeh came up with a completely "original" idea for this routine; two people that know they are the only ones for each other. However what worked here, despite only having one week together so far, was their chemistry. Their performances really lifted this been-there-seen-that routine up. B


Janaya & Brandon: First off I want to ask why were the subtitles that were used during the 9-second introductions so rude? When Janaya said how she hates eating orange candy it rudely replied back with "well don't." Well maybe she can find comfort from this insult from the old bottle if she doesn't have to keep stealing it back from Brandon in this Tabatha and Napoleon routine. For this I have to disagree with the judges. Brandon did not give anything for me in this performance and did not accurately portray the character of the alcohol addicted man choosing between booze and his lady. One man that commented he would always choose the woman (in this case Mary Murphy) over the bottle was Nigel Lythgoe. However I'm sure he takes a shot or two before he gives the bottle up every Wednesday when he has to sit next to her and her hot tamale train. B-

Alexa & Daniel: After Daniel gave every Australian cliche in his 9 second introduction, Sean Cheeseman choreographed a strange number for these two involving a large scaffolding unit and red business suits. While it started out promising the choreography and the dancers struggled to connect the movements and not show their struggles going in and out of the lifts. Not to mention their plastered on smilies did not give the life the routine clearly needed especially with the upbeat and fun music. C


Amber & Nick: In this Jason Gilkison waltz routine Amber and Nick showed Alexa and Daniel how to connect their choreography and lifts. While nothing new to the SYTYCD stage, both dancers gave a beautiful and dreamlike performance in an overall lackluster night. Also great pre-production planning on Nigel's part to mention Gilkison as a regular "Abby Lee Miller" only for the Dance Moms coach to be right in front of a camera in the audience. Expect the unexpected in these "live" shows I guess.  B


Amelia & Will: Despite my already dislike for these two performers (which is pretty tough since I really have only seen 9 seconds of Will total this season) I finally saw something different hit the stage. In a jazzy hip-hop number by Tabatha and Napoleon we find them as literal yet figurative alley cats falling in love near a dumpster. Despite the judges and their comments about if they "had a kitty like you they would play with it all day" this performance made my whiskers tingle. (Believe me if you thought that was bad you should have heard their constant cat puns). A-


Janelle & Dareian: Cheeseman was up again in this African Jazz routine and while it was much better than his earlier work tonight, I still saw all the work going into this fun and upbeat number. Sure the lifts are impressive but it should be effortless and unexpected. I should not see and expect a buildup and flip. I want to be surprised! Come on Mr. Cheeseman sir! B


Eliana & Cyrus: In this broadway routine straight out of Hairspray by Tyce Diorio I finally had a smile on my face. Set in a classroom these two kept me guessing about what was going to happen next. Fast surprise lifts kept my eyes glued on the screen. Not to mention both of their performances felt genuine and real which was unlike many of the performers tonight. A


Audrey & Matt: Travis Wall is one of SYTYCD's dance best choreographers and perhaps it was because a few years ago he was in Audrey and Matt's shoes (or feet since many dancers don't wear shoes) competing on the show. In this Titanic number we had hands down the best choreography of the night. Both dancers were fully committed and gave it their all in this routine. I was on the edge of my couch like Audrey who leaped off of the sofa and into Matt's arms with ease. While the song was a little cheesy for me, overall this routine worked. A


Lindsay & Cole: The night ended with a so-so pasodoble routine by Jason Gilkison. I was very excited hearing the music build up only for it to climax with a simple ballroom partner walk towards the audience. While other moments worked, this uneven routine was all over the place. Overall much like tonight's episode I was let down with this last peforamnce. Besides nobody could take this piece seriously with the Steve Urkel high-pants that Cole was forced to wear. B-


Next week we will lose both two girls and two guys and help bring these episodes to hopefully a slower two hours where we can actually learn more about contestants then one of them having a family member working at the playboy mansion. Besides from this tidbit and having one girl hate orange Skittles I know very little about these contestants who will have two be crowned as our favorite dancers later this summer.