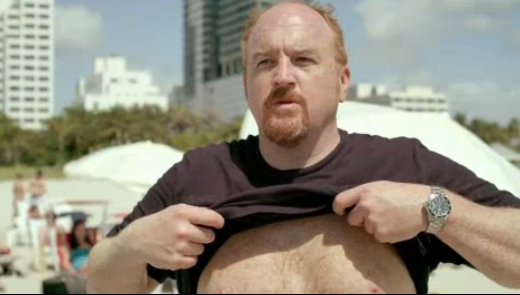 ML- I think it's fair to dub last night's episode of Louie an "instant classic".

"Miami" takes this idea and builds upon it, or rather, breaks it down, because it takes away the subtext by removing the text, as dialogue, from the episode's climactic scene. in doing so, CK demonstrates comedic genius that gives the audience great a payoff, even though/because it's the one they saw coming.

The episode starts with Louie's plane landing in Miami for a couple days of gigs. I like to imagine the idea for this episode springing from the real CK just acting on a whim to shoot in Miami, like the crazy rebel he is, but the television-radio student in me knows all of these locations had to be secured weeks in advance, so that's likely not what happened.

The best episode of Louie (and, really, are there bad episodes?) feature Louie as a fish out of water. "Duckling", last season's brilliant 1-hour special, brought Louie all the way to Afghanistan to entertain the troops. Here, we got a much more familiar, relatable experience as Louie reached the shores of Miami, and realized he did not fit in with the lean, tan bods that littered the sands. He thinks twice about taking his shirt off, and instead heads inside.

Some people might take this as a sign to get fit or find another fun, fully clothed thing to do. It says a lot about Louie that instead he chows down on a big sub and waits until the cool kids all scatter, and all the out-of-shape outcasts can enjoy their time in the (quickly setting) sun. He's like the runt of the litter when he doesn't have to be, but his insecurity keeps him from fully taking what he wants.

This all changes when he finally swims out into the water and a man on the beach mistakingly snatches up Louie's chair. He waves from the water for the man to stop, and the lifeguard takes this as a signal for help. He rushes to Louie's aid, who continuously mentions that he's not drowning. The lifeguard, young, fit Ramon, saves him anyway, and the two head back to the lobby for Louie's set.

Immediately, I began thinking "gay storyline". My suspicions grew as Louie bought Ramon a drink. It was too obvious, I then deduced. There's gotta be something more at play here.

The two bond more over Louie's stay, and Ramon shows his out-of-place friend around the city. After seeing Louie splurge on the motorcycle as a sign of renewing his manliness, it was great to see him riding on the back of Ramon's bicycle. This truly is a different world for him, and he experiences it fully as he spends the night at a party hosted by Ramon's Cuban family. Ramon draws his attention to the nearby hotel, and how those people, though they'd lived in Miami their whole lives, also didn't know the world he lived in. Louie again notes that he wasn't drowning, but he's glad Ramon saved him. From all the subtext, we know he's not talking about the beach.

After a frantic race to a show, Louie decides to stay in Miami another few days and calls his ex-wife Janet to confirm she can watch the kids. She can tell something from the sound of his voice (another nod to subtext)- he's met someone. She thinks it's a romantic thing, which he tries to dismiss, but it's true that he has "met" "someone", and clearly this person is the reason he wants to spend time in Miami rather than with his daughters.

This is the second week in a row gay panic has been a theme addressed in the show. Last week was when Melissa Leo's guest character used calling Louie gay as a method of exploiting him for sexual favors. We've also seen the motif of the motorcycle/bicycle play throughout these first three episodes. Is CK developing more season-wide themes that will build to something and later pay off, or are these just coincidences?

By the third act both Louie and Ramon know there's something going on in their chemistry, and they sit down at a bar (after swimming together all day) to discuss it. Ramon starts and implies he knows something about Louie, who denies it and tries to explain where he's coming from. Except neither of them actually say anything. In their entire conversation the actual words don't come up once. When Ramon says "I have a cousin, Manny...", Louie stops him short, because he knows why Ramon is brining up Manny.

This is the most manly conversation about homosexuality I've ever seen on television.

It ends with Louie doing stand-up, where he finally can bring the point home- heterosexual men are the only group of people who care that people identify them as such. Gay people, he says, aren't worried someone might mistake them for straight. It's rare that shows can make us honestly feel sympathy for the straight man, or the white man, or the educated man, but Louie does so without saying anything that offends anyone. As it turns out, he doesn't have to say anything at all. And it's wonderful.