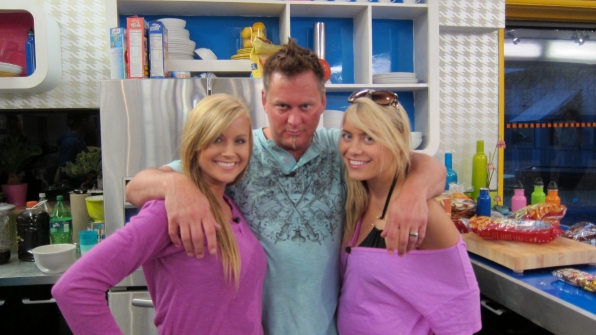 
ML- I used to think that Survivor was the greatest game ever created. In it, you must vote out your opponents, and, in order to win, convince the eliminated on the jury to pick you over someone else. Lately, I've been more on the side of Big Brother being the greatest game, because it is designed to allow for constant shifts in power every week. And after the absolutely chaotic week in the house, we saw an absolute reversal of fortune. Game on.

Kara came out of the PoV ceremony claiming she was "all cried out" and ready to secure the 5 votes she needed to stay in the game. Frank, too, battled for his spot, making friends with his betrayer Willie under the assumption Willie had Frank's best interests in mind. Unfortunately for Frank, Willie only has Willie's best interests in mind, all the time. So when Willie subscribed to the plot of sending Janie's team's votes to Frank to re-focus his target on them, and Frank then found out, the Fruit Loops were bound to hit the fan.

BUT FIRST (Seriously, Emmy voters, why keep snubbing Julie Chen for Reality host? She's hilarious!) Britney had an egregious moment of paranoia and shared her suspicions of the coaches entering the game, on the basis of coaches having key holes in the memory wall, with Willie. Willie then called a "No Coaches Allowed" house meeting with the newbies to share this info. Wil at one point declared he was taking a 24-hour break from the game, which Willie later mocked to Frank using an effeminate voice and flamboyant hand motions.

Next, Joe spilled to Frank Willie's plan to pin the votes on Team Janelle, which Frank felt nullified their agreement. He then told Joe about the mocking, which spread like wildfire through the house and made it back to Wil. Britney, now convinced of Janelle and Dan working together, told Willie of his new image in the house. Willie confronted Frank, and the season's first blow-out went down in the backyard.

On one side, Willie "Grown Ass Man" Hantz, who was accused of making homophobic comments by many (not Frank), which I don't actually agree with. I'd mock Willie's voice, I'd mock Wil's voice, and JoJo's, and Danielle's, and Ashley's, because these people are characters chosen for their distinct voices. Wil is, in fact, gay and expressive. Was it nice of Willie to mock him? Absolutely not. But was it blown out of proportion by Frank, Joe and the rest of the house? Absolutely.

That brings us to Frank "Straight Talkin' Mother F*****" Eudy, who made a bold move standing up against bullying in the house which gained him great favor from Wil and Team Janie. Usually, advice is to avoid confrontation to get by, but in this case, Frank made many allies and cemented a leadership status in a new voting block determined to weaken Willie by keeping his greatest enemy around.

At the live vote, Frank expressed loyalty to his new side, while Kara sold someone out by saying they made a final 2 deal with Frank. Who was she referring to? We'll probably find out next week.

In the end, Danielle stood by her teammate and Shane and JoJo stood by Willie to vote out Frank, but Jenn/Ian from Team Boogie and Joe/Wil/Ashley from Team Janie had the numbers and eliminated Kara 5-3.

Last week, I predicted someone from Team Dan would go and chose Danielle instead of Kara. I picked Frank as the winner, and still think he can win the whole thing after surviving this crazy week.

My belief was strengthened at the HoH Competiton, Big Brother Break-In, which asked questions about videos the house guests were shown of a "burglar" breaking into the house and causing detail-oriented trouble. Shane was out first, and then with one question about shaving legs, it was down to Wil and Frank. At that point, it was a foregone conclusion that this new alliance would have the power no matter what. I think Wil threw the challenge so Frank could win, but whatever really happened, it proved that this game is so unpredictable and so entertaining that truly anybody can win.

Julie also announced a new twist to the Coaches' Competition- the winning coach can either save one player from nomination, as was true last week, OR trade one team member for one from another team, HoH excluded. I don't expect any coaches to do this, as there would be no camaraderie between the coach and either their disposed or claimed player.

Who will Frank nominate for eviction? Find out Sunday at 8! Thanks for reading.

LIVE FEED SPOILERS AHEAD- SERIOUSLY STAY AWAY!!
Those predictions were made Thursday night immediately after the episode finished, before the publication of this article. At this point, one prediction has already come true- kind of. Willie went absolutely nuts, swearing at everyone and slamming doors, and entered the DR for a few hours, during which the feeds were down. By the time the Live Feeds came back on, Willie had been expelled from the game. That's right, folks, Willie Hantz is gone.

Janelle won the Coaches Comp and saved Ashley from nomination. Frank remained HoH and made his nominations- Shane and JoJo, both from Team Brit. Apparently the target is Shane, but if he saves himself, they're going to get Danielle out to eliminate Dan from the house.

Posted by Dual Redundancy at 10:24 PM