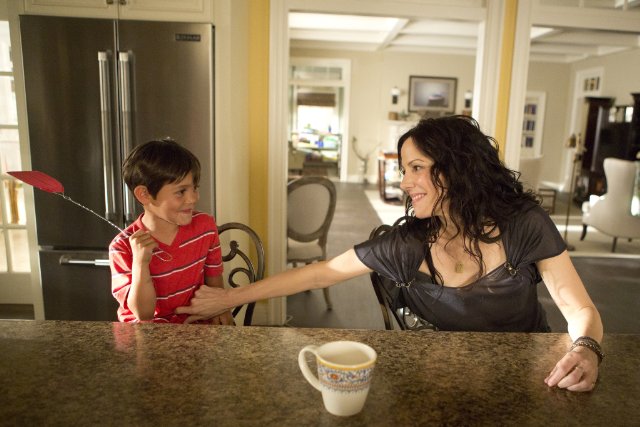 
ML- It's the final countdown of Weeds episodes, the end of a long, dangerous journey by the Botwin clan, and we get an episode full of roller derby and Mae Whitman (Parenthood, Ann from Arrested Development) blowing an albino. Is it too much to ask for a little Weed?


I have to give the writers credit for keeping the pace of random, hilarious dialogue up over these 8 seasons, especially in regards to Andy. Justin Kirk never got any Emmy love for this show, which is unnerving, as he brought his A-game tonight apologizing for a forged Raquel Welch signature. But the storyline in which this dialogue exists doesn't stack up.

Seeing Nancy actually try to help someone who wronged her was another big development in her growth towards an "After Botwin", but the end result was about the same as her usual vindictive ways: his life was ruined. Tim goes off to jail, another casualty of Hurricane Nancy's reign of terror throughout the country (and Mexico).

But everything else in the episode was lacking for me. Doug's business story lines are always a drag on this show, and though it looks as though they'll be transitioning to something else now that he transferred lots of Vehement money to a Wilson/Tillerman "non profit", he still feels like a vestigial structure of the show's past, kept around solely because he's a desperate actor with a semi-big name. He ruined what could have been a perfectly peaceful Steve Martin banjo cover of "Little Boxes", too.

The roller derby stuff with Andy was there to get the girls to hate him and turn back to bloodthirsty dad Scott, but it felt so unnecessary. The twins began attacking Andy by destroying his shoes in the oven, so immature Andy retaliated by cutting off the Dread Menace's red dread. This lead to a moderately funny slap fight with Scott that was enhanced by some seriously funny heckling from the twins. Scott's vent was extremely uncomfortable and slightly unbelievable, as he ranted on about how he never wanted twins and, when he saw the sonogram, hoped for an abortion and a new boat instead. No dad would talk like that in front of his kids, but it did get them to side with Andy, the whole purpose of the ridiculous B-story.

Mae Whitman was pretty hilarious as Tula, Tim's girlfriend with some severe issues of her own, and another vessel for some out of this world dialogue. I'd like to see her return, but with so few episodes left in the series, I'd much rather they devote time to important plot lines and character progression.

Speaking of character progression, it was great to see Shane as a cop, and even greater when Nancy was so caught up with Tim that she didn't realize her son's accomplishments. He didn't use the gun he got from Tula to shoot Tim, he tested it against the shells. She was so focused on the darkness she had brought to that boy's life that she didn't notice the shining presence Shane had become, at least in part under her guidance.

One last thing- the title was taken from Tim's line regarding someday Nancy's bullet repositioning in her brain, and her seeing blue, smelling cheese and dying. I know I haven't seen past the first season of The Sopranos but I have a blanket knowledge of just about everything TV, so this made my foreshadowing sense tingle in the same way Sopranos mentioned RANDOM SOPRANOS SPOILER ALERT everything going black and not hearing anything at the moment of death. Will we end with things seeming great for Nancy, then the screen going blue?

Posted by Dual Redundancy at 8:59 PM