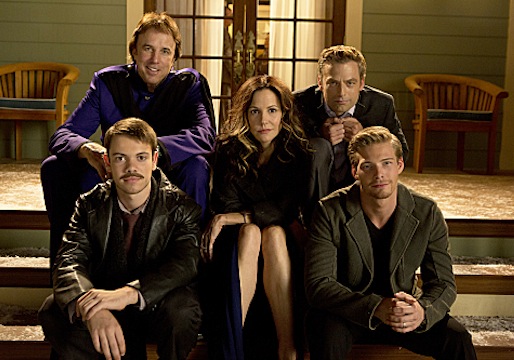 ML- I first discovered Weeds in 2007 thanks to a sale ticket at Best Buy advertising the first season DVD for only $14.99. I snatched it up, and promptly bought the later seasons as they came out. I was drawn to Jenji Kohan's style of off-beat humor and the complicated family dynamic of the Botwins, acted superbly through and through by Mary-Louise Parker and Justin Kirk (and, later, Hunter Parrish).  Not only was the show funny, it was fun, with twists and turns that kept the audience guessing and brought out the best in the characters.

I don't feel like that is the same show that ended this week. That show really ended when Nancy burned down Agrestic, before we lost Elizabeth Perkins and travelled to Mexico and New York and all around the country. I stayed with the series because it never required too much of my time or thought. It's not like a Heroes that frustrated due to high expectations. Weeds was my show to go to when nothing else was on, which I could enjoy without taking it too seriously or getting too invested. Perhaps that doesn't make me the best person to be reviewing the finale, but for all of these reasons, I actually didn't mind how the show took its bow.

That's not to say the finale was an exceptional piece of television. The writing was spotty, a shame to Kohan who is obviously quite talented. All the random conversations at the first party didn't do much to move the story forward, and only work in the case of a reunion-style finale. Most annoyingly, Nancy seemingly made the decision to make a big change with her life and move forward, but we never got to see what that was. I'm all for ambiguity in TV show finales and letting the audience predict the characters' fates, but this felt more of a cop-out considering they already jumped ahead ~8 years to show us futures. Would it hurt to satisfy us with a concrete path? Or was Pittsburgh the legitimate destination?

Back in season 6, when things were at their most outrageous creatively, I predicted the series would end with Nancy waking up from a dream, just another suburban housewife stuck in her Stepford life hoping to go on adventures. I'm glad it didn't. The series was about Nancy Botwin and the choices she made as a mother and a woman, and to let her off the hook like that would be a mistake. Earlier this season, when Nancy admitted she wasn't a good mother, I praised the show for finally going there. As the season progressed we saw her fall back into her own ways, one of the reasons I got frustrated and stopped covering it week to week. But here, we were able to see that eight years and another screwed up kid later, Nancy hadn't changed one iota.

I don't know why I was shocked and saddened to see teenage Stevie cursing and talking like the other characters on the show. The transition from 5 year old hispanic looking innocent boy to 13 year old caucasian looking potty mouth was jarring, but was necessary to tell this story. Nancy raised one son who married a woman that resented her, one with an alcohol problem and one that yearned to abandon her for boarding school. That's how she saw it, anyway.

I think the series, while often out of focus, provided wise insight into what it means to be a mother, what it takes to be a mother, and the negative impacts a mother can have on her children. The scene with Josh (a surprising call-back to a character only present in the pilot episode) was perfect and the episode's highlight for me, because Nancy got to see how someone with a different mother turned out. It put into perspective her own reign of motherhood, which would soon come to an abrupt end, as a failure because she failed to take into account what was truly best for her children- not being around her. Were it not for her talk with Josh, she wouldn't have let Stevie go to boarding school, and he would continue to grow in her toxic garden.

Weeds was not just a show about marijuana- Kohan has said that the Botwins themselves were weeds, ruining the places they popped up in. It was bold and unique of her to keep this unlikability factor up throughout the whole series (an unlikability I choose to believe was intentional). As great a character as Nancy Botwin was, she was never a good person and oftentimes was an awful one, but that's what made her the great character. She was flawed, she carries her flaws with her, and in the end, she accepted them. She let her baby go so he could be free from her, she took in her ailing child and vowed to give him the help he needed in the place he always wanted, and shared a moment with her oldest son, the man who had grown up past all the shit they went through and let go of all his baggage. Ironically (or not, given Kohan's obvious political views), the one who dealt with drugs the most turned out the most stable.

All this and I haven't even gotten to Andy. The scene at the end of the 100th episode (which was the season's best, aside from the premiere), where Andy and Nancy had sex at the spot of Judah's heart attack, was perfectly poetic. And when he left her crying, finally free of her hold, she broke down. Obviously, for the eight years following, she kept a longing for him in her heart. She asked about him over and over to the boys, and the scene where Silas filled her in on Andy's personal life was sweet. Nancy heard about his baby, and his girlfriend, and his restaurant, and watched it all play out in her head. It made sense for him to get what he wanted because he achieved it all without her.

When he finally arrived he was distant, and Kirk and Parker did a fantastic job of conveying the awkwardness of 8 years apart. Seriously, I have nothing but good things to say about both of those actors and the performances they put out over the last 8 years, despite the quality of writing. When she got him alone later, he reluctantly let her cry in his arms. She pleaded him to come live with her, she'd give him her business and all of her money to start a new restaurant. He declined. She agreed to move to Ren Mar and sell her house and live with him there. He denied. Andy, who spent the series trying to get in touch with himself, through religion, through women, found it without Nancy. He wasn't going to let her come back into his life.

He advised, instead, she move on. She may have been the world's worst mother, but thats okay, because she no longer has to be a mother. She can be whoever she wants, whatever she wants, wherever she wants. I think this is a tough lesson for mothers everywhere, but an idea that can empower many empty nesters who feel lost when their children leave home. Nancy constantly reinvented herself, changed her name, changed her partners. Maybe without children to take care of she'd be able to be at peace with her selfish nature and just indulge.

Indulge she did. It was rare to see Nancy actually smoke weed during the course of the eight seasons, but in the series' final shot, Nancy sat on the steps pondering her future, and was accompanied by Cult Leader Doug, Silas, Shane and Andy. They passed a weed cigarette amongst each other, sharing in a high that will become the finale's most iconic image. Some say weed lowers your motivation, but I don't think that's the case here, again, given Kohan's political stance. Each of them takes a puff, and they're ready to move on to the next part of their journey. It's time.

I can't say that I'll miss Weeds the show as a whole, at least after the last few seasons of sub-par storytelling. What I will miss will be the theme song, and the random one-scene characters (like the lesbian moms with their Chinese Jewish daughter this week), and Andy's long-winded rants, and the acting styles of Parrish, Kirk and Parker. As bad as things (plot contrivances, all things Doug) got, in the thematic sense, the show went out on a high.