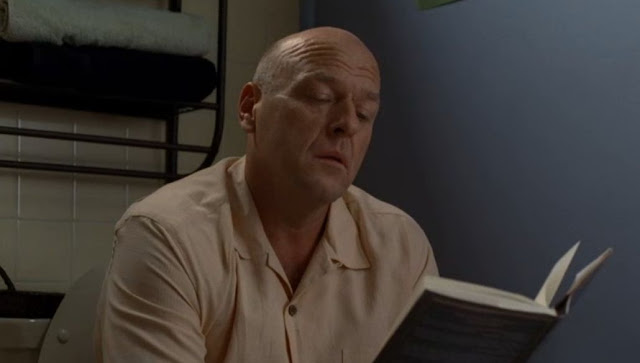 Walt's downfall isn't going to be attributed to his ego spilling over, or his wife's immense fear, or any of his cronies buckling under pressure and calling the cops. It's because of some light bathroom reading Hank perused through while going #2 in the White bathroom.

This episode was a stunning achievement of storytelling. Gilligan and co. disposed of the 10 potential whistleblowers in cinematic fashion, calling back to Walt's new watch in a scene that felt straight out of The Godfather or Goodfellas. We got a three month time jump, which felt honest to the story and relieving to get fresh takes on everyone. Plus, the new baby they got for Holly was freaking adorable.

None of my "bold predictions" I made came true tonight, which isn't too disappointing because they were more geared towards the next season. In fact, Breaking Bad is the type of show where it feels good to be wrong. Spoilers must be avoided like the plague, as any clue to where the show heads next feels like you're taking the TV equivalent of performance enhancing drugs. Being on the West Coast, staying off of Twitter and Facebook while the East enjoys and comments on the twists and turns gives a satisfaction similar to pledging celibacy until marriage or not eating all day before Thanksgiving dinner: you know you're in for something beyond words when the moment finally comes.

I wish I had put more weight into the Whitman book, especially given that the title of the episode, "Gliding Over All", is the title of one of Whitman's poems. It goes:

GLIDING o'er all, through all
Through Nature, Time and Space
As a ship on the waters advancing,
The voyage of the soul--not life alone
Death, many deaths I'll sing.

Walter sang many deaths tonight during the simultaneous killing of the imprisoned Fring associates. There are many more deaths awaiting him, including, I suspect, his own.

At first I was surprised to see Walt retire so quickly, but it all made sense in a way that was true to the character. Walt said he was in the empire business, making a product as American as Coca Cola. He started off as a small business owner struggling to peddle his product, but he found success and achieved the American dream of having what he wanted, more money than he could spend in 10 lifetimes. But, like so many Americans before him, everything he wanted didn't bring him any happiness. In his mind he had a vision for what his life would be like as a rich meth lord, but by becoming the best, he destroyed any competition and things became boring.

So he chose between the American ideals: Live Free or Die. He picked to live free, because it no longer seemed like he would die as a meth cook. This is because, I suspect, his killer has returned- the cancer. As he exited the rest room, he saw the paper towel dispenser he punched back when he was told his cancer had decreased and he was getting better. After this visit, he smiled and moved along. Was he merely reminiscing on how far he had come and what a fool he had been back then? Or did he finally have some relief to his conscience, knowing death was slowly creeping back into his body?

His visit with Jesse was nice, but it also reminded me how little Aaron Paul had to do this season. There's no great Emmy tape for him here, while Cranston has a few possibilities, Anna Gunn has the pool/fight episode and even Jonathan Banks could compete with a couple episodes. But Paul was severely underutilized, aside from getting to yell "Yeah, Bitch- Magnets!".

Their back-and-forth was awkward. The men had been through so much together, but in the end, they're just like any coworkers who can't find common ground when they leave the office. Remember that RV? And that time we got stuck in the desert? Walt misses the craziness of those times, as does Jesse, who is falling asleep on his couch with nothing to do. Before Walt goes he mentions "I left you something", referring to bags of money on the front porch. Jesse takes them in and has an emotional breakdown, most likely due to the fact he was prepared to shoot Mr. White with a gun he grabbed when he saw him at the door. Jesse is still living in fear, because he can't not. Mike knew he couldn't just get out of the drug game. His mind is in it.

So where do we go from here? We still have 9 months to go before we see Walt's 52nd birthday from the teaser of this season. How will Hank handle knowing his geeky brother in law is really the biggest, baddest drug lord in history? Will the loose ends from previous seasons, like Jane's death or the ricin in the outlet, come back into play? I hope so. I should probably stop speculating about this show, one because it will drive me crazy while I wait for the next year, but two because I'm sure my predictions will be wrong, and it may be more fun to strap in while Vince Gilligan does Walter White-style donuts with out emotions and expectations.