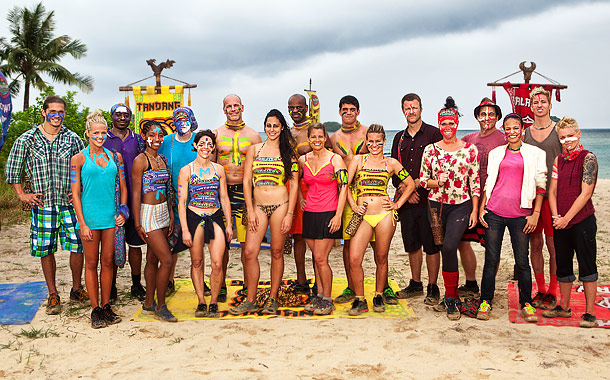 The granddaddy of all reality is back, chocked full of good and bad in the 90-minute premiere that I wasn't excited for until I heard Jeff's prologue at the beginning of the episode. This was a summer of Big Brother submersion, and Survivor just wasn't on my radar, but I was pleasantly surprised with the premiere, specifically the cast. For this first week, let's look at the castaways, and see what past contestants they remind me of to get an idea of how they may fare:

TANDANG: (Yellow Tribe)
Mike Skupin: Mike is basically Mike Skupin 2.0 with a hint of Boo Bernis from Survivor Fiji- the guy who kept getting hurt over and over. He has definitely aged (is his speaking voice odd for anyone else? His mouth moves in a weird way), but I remember being such a huge fan of him while he was on Australia, so that "star" factor is still in play. His new "Go With the Game" mantra will probably be the title of his next book.

Abi-Maria: The Brazillian flirt is very Sugar from Heroes v. Villains with her sexuality and personality. Peter seemed interested, but to the audience it came off as very desperate. She's going to have to show some better understanding of the game to translate that sexuality into a Brenda or even Parvati ranking.

Artis: Pretty nonexistent but physically strong black guy. Ibrehem from Palau? Definitely not as ripped, though. We'll have to see more from him to get a better sense of his character.

RC: She's the Parvati of the group. Sexy (a few of my guy friends messaged me to tell me they wanted her to be their winner pick, based on her "strategies", I assume), but also a firm grasp on the game and a good rapport with the camera. I see her going far with the alliance she was quick to form.

Lisa: The celebrity factor of Ashley Massaro with the personality of Tracy from Fans v. Favorites. Isolating herself will not be good, but with Skupin having her back she may be able to outlast Artis.

Peter: Young, athletic and already noticing the hot girl, he reminds me of Alex from Amazon or Keith from South Pacific. He's in the alliance, good for him, but we didn't get any insight from him, so I doubt he'll be taking the money home.

TANDANG FORECAST: Strategically they're well off for now, physically they stand to be unstoppable if they do cut Lisa at their first TC. I'm thinking the winner could come from this tribe, but my actual winner pick isn't wearing yellow.

Jonathan Penner: Same old Penner we know and love. I like how humbled he is by getting to play the game again. Great TV and definitely a class act, he's one in a million and I'd love to see him take this game. Unfortunately, he's going to need that Immunity Idol he's so desperately looking for if he wants to survive in his tribe.

Dana: Petite and spunky, definite Courtney Yates from China/HvV vibes from her. She doesn't want to see Penner or any third timer for that matter take the crown.

Dawson: Her last name, not her first name, which puts her in the leagues of Cochran and Penner automatically! Kidding of course, but her ability to spot Jeff Kent makes her the Danni of the season, just as she spotted Gary Hogeboom in Guatemala. It'll take a lot of expert maneuvering to match Danni, though.

Carter: Didn't make a peep but was young and buff, basically the Samoa Brett of the episode.

Katie: Already forgot who she was. She doesn't like Penner's shadiness, so an unmemorable person from a Penner season is the infamous Mary of Micronesia.

Jeff Kent: The Gary Hogeboom/Jimmy Johnson/Brendan Synnott of the season. Hiding something big from the rest of the castaways is always a thorn in your side, and soon people will figure out he's not a motorcycle salesman like he claims. With his messed-up knee, too, I don't see him making endgame.

KALABAL FORECAST: The only thing they're unified on is taking out Jonathan. Jeff and Dana are a pair to watch, but once Dawson opens her mouth, who knows what will happen. I don't think the winner will come from here, either.

Russell Swan: Obviously, same old Russell. Wasn't the best leader of Galu, not the best leader of Matsing. His "reign" will definitely be short lived. Bossing people around will get old, and Malcolm proved he has the survival skills to provide for the tribe.

Angie: Former Miss Kentucky, former track star, definite threat with her alliance with Malcolm. She's like a personable Amanda, aside from the fact she's bad at puzzles, and I can see her making some big moves if given the opportunity. She wanted to switch things up already by day 3!

Zane: Poor, poor Zane. He was like Brandon Hantz with his creepiness and Chicken with his ability to self-destruct himself out of the game without even trying. His bold move was a stupid one, as was his making alliances with everyone. Production probably saw him as the next Hantz, but he holds the rare honor of actually being dumber than a Hantz. His 5-1 elimination was his own damn fault, despite Russell's best efforts to dig his own grave.

Roxanne: Really, really liked her. Obvious Francesca vibes as being an un-"crazy" black woman on this show, but her military background and physical prowess should hopefully send her further into the game like Alicia.

Denise: The sex therapist did a great job of summing everyone up with ease. She aligned with Malcolm, another strong player. To me, she is an older Sophie, eloquent and intelligent with a good grasp on the game and human interaction. She may not be the most obvious or conventional pick, and she didn't necessarily get the best edit, but I think she's absolutely the one to watch going forward, for me at least.

MATSING FORECAST: They need to cut Russell loose, stat. Getting rid of Zane was okay because he really did screw up his part of the challenge, but Russell is toxic in camp as well. The other four need to bond together as a cohesive unit to stand a chance against the other tribes, especially once the inevitable "dissolve" twist comes into effect.

Overall, I like the premiere because we got to get to know more people than the 5 that have been beaten over our heads in every CBS preview. The cast seems like a good crop for the most part, and the returning players don't have humongous egos like Ozzy, Coach, Rob or Russell Hantz.

Posted by Dual Redundancy at 12:53 PM