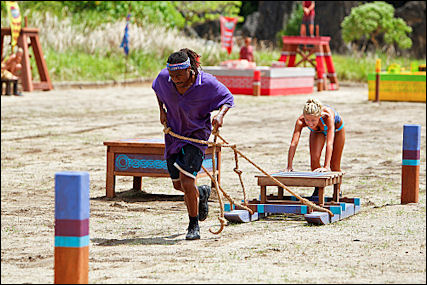 Roxxxxxxxanne
You don't have to call out the showmance
Subtly sew distrust,
It'll be more effective than freaking out at Tribal Council and alienating everyone by speaking in tongues

Okay, I may have botched that song a little bit, but I haven't had a lot of water today... so...

Matsing (aka Tribe 1 for either arbitrary or spoilery reasons), fell apart even further this week as a showmance splintered trust and nobody stepped up to lead in the challenge. Worst of all, the tribe doesn't even have cookies.

The tragic thing is, Roxy was completely right about Malcolm and Angie. A pair, especially an athletic relationship, is either the most dangerous or the most vulnerable position in the game. In a tribe of 5, everyone needed to unite against Malcolm/Angie, which was never going to happen thanks to my winner pick, Sex Therapist Denise. I assume she saw Malcolm and Angie as potential clients and the subjects of her next book, Love in the Wild: How to Survive Being Backstabbed By Sea Snakes and Get Crabs Out Of Your Buff. She also astutely pointed out that, despite Malcolm being her main ally, being the odd-person out in a threesome is what the sex therapists refer to as the worst. But the timing wasn't right to betray her only ally, so Roxy had to go.

Roxy's pre-challenge behavior was elimination-worthy on its own. After a terrible rainstorm, Roxy began speaking in tongues and praising the lord like Jameka from Big Brother 8. Nothing against her religion, but speaking in tongues can be a red flag that someone's head may not be 100% in the game of Survivor. Take Dr. Denise, for example. She says that anything that gets her to the end of the game will be of her own doing, not God's or anyone elses.

Over on Tandang, Lisa further distanced herself from her tribemates by sitting alone at the well and crying, which has made the majority alliance go from 4 to 5 with Artis now included. If Tandang loses, Lisa is in trouble, unless she can pull some type of Holly Hoffman maneuver and turn her sorrows into strength. Meanwhile, Abi-Maria and RC Became the most dysfunctional alliance since Russell & Parvati. All RC wanted was to trust Abi-Maria with her idol clue, but Abi-Maria was so threatened by RC's bond with Skupin that she threatened to kill her if ever betrayed. Healthy stuff right there. Abi-Maria is a little too crazy for this game, but makes good TV and I'd love to see her blindsided!

At Kalabal, Jonathan used his brain and figured out the clue meant the idol was under the nose of the bull pendant wedged in their welcome basket. Now he's got an idol, which he'll probably have to use at his first tribal considering we haven't seen any other strategizing by him yet. He better keep those glasses on, because he'll need another hidden immunity idol after this one gets used.

Tribal Council was entertaining with all the bitchy back-and-forth between Roxanne and Angie, whose cookie comment wasn't as dumb as Probst made it out to be. Malcolm's "little sister" comment about Angie was, however, pretty dumb, unless it's comparable to Kat and her cousin from last season.

In the end, two dangerous pairs remained in the game with Malcolm smack dab in the middle of both. I had high hopes for Roxy but she quickly fell into paranoid craziness way too soon. If there's any indication that God isn't invested in Survivor, her ousting from the Matsing tribe is all the proof I need.

Posted by Dual Redundancy at 1:26 PM