In all the acting categories at the Emmys, nominees submit one episode (or "tape") they feel showcases their best work that season. I've been watching all the submitted "tapes" and reviewing them critically to help determine which actor/actress is most deserving come Emmy night. 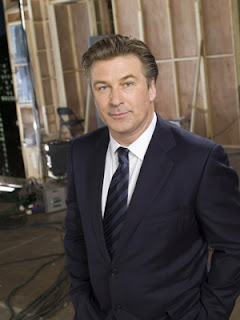 Alec Baldwin as Jack Donaghy in 30 Rock
Submission Tape: "Live From Studio 6H"
A.K.A. The One Where... Jack decided to stop shooting TGS live and instead film all the episodes in a two-week period "like Wheel of Fortune or Fox News." Kenneth traps everyone in Tracy's office and forces them to reminisce on great moments of live NBC, many of which were hilariously acted out by Baldwin.
Notes: Baldwin gets some great material here, getting to play multiple characters (the type of episodes he always submits, like "100" last year and "Generalissimo" a few years back). The fact he must change outfits so quickly adds to how impressive of a job he does. His timing is wonderful, and, as someone who was in the audience of 30 Rock while he did this episode live, I got to see his professionalism and star power in person.
Verdict: He has won this award before, but the past season of 30 Rock didn't make many waves, so I'd count the deserving Baldwin out. Perhaps he'll be a frontrunner next year for the final season.
Grade: 7/10 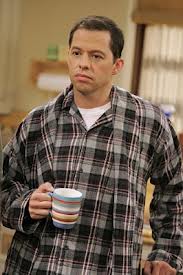 Jon Cryer as Alan Harper in Two and a Half Men
Submission Tape: "Frodo's Headshots"
A.K.A. The One Where... Alan returns from the mental hospital after his breakdown to find out his son got his girlfriend pregnant, his girlfriend is sleeping with his roommate, his mother wants nothing to do with him and his best friend wants him dead.
Notes: How funny does that episode sound? That's how funny it was to watch. That being said, Cryer did do a good job with the material given, and got to lose his cool as his life crumbled around him. This is Cryer's first time in the Lead Actor category, which is actually less competitive to get into than Supporting. Will that translate to an easier win for the perennial nom (and past winner for the same role?) Hopefully not, as there are many more deserving, funny men in the running this year.
Verdict: Cryer shouldn't win this, but he is well liked by the Academy members, so anything can happen.
Grade: 5.5/10 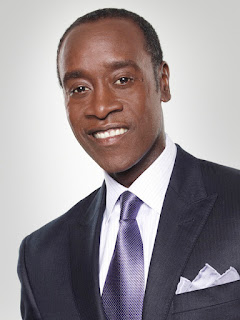 Don Cheadle as Marty Kahn in House of Lies
Submission Tape: "Pilot: Gods of Dangerous Financial Institutions"
A.K.A. The One Where... We are introduced to Marty, naked in bed with his ex wife, and later the rest of his team. He goes out on a bender and winds up bringing a high-end stripper to a business dinner. He flirts with Kristin Bell and deals with his son's desire to play Sandy in his school production of Grease, all the while stopping to fill the audience in on complicated jargon.
Notes: The pacing and structure of the show were incredibly frustrating, and Cheadle didn't get much opportunity to be genuinely funny. His acting was fine, and they gave him a "Don Draper"-esque scene at the end, but it wasn't powerful enough, or funny enough, or sentimental enough to strike a chord.
Verdict: Cheadle snuck in thanks to his star power, but that alone isn't enough to win the Emmy, and unfortunately, its all he has going for him.
Grade: 4/10 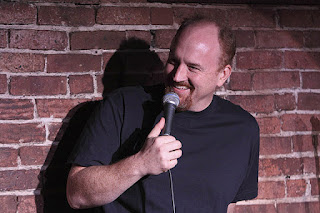 Louis C.K. as Louie in Louie
Submission Tape: "Duckling"
A.K.A. The One Where... Louie goes to Afghanistan to cheer up the troops with his stand-up, unknowingly bringing a baby duckling with him in his suitcase.
Notes: He has humor with the stand-up, which knocks it out of the park every week. He also has sentimentality with the end, where he basically soothes over the conflict with his goofy, bumbling persona. Also, the episode is twice as long as all the others, giving viewers more time to spend with their main man. In addition to all that, his show aired new episodes during the voting period, so he could be fresh in the minds of those struggling to make a decision.
Verdict: While not the best submission from Season 2, "Duckling" has a lot of great things going for it, as does CK. It shows off all of his strengths, especially the stand-up. He broke the record for most nominations for a single person this year with 7, so hopefully he can cash one in for gold.
Grade: 8/10 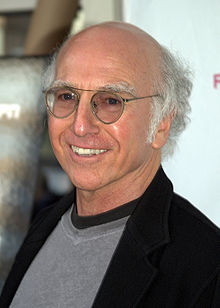 Larry David as Larry David in Curb Your Enthusiasm
Submission Tape: "The Palestinian Chicken"
A.K.A. The One Where... "Social Assassin" Larry tells people hard truths about themselves, but everyone can tell he's  acting on the behalf of others. When a Palestinian Chicken restaurant opens up, his Jewish friends want to boycott the very anti-Jewish establishment. Larry is caught in the middle, however, because the chicken is just out of this world.
Notes: David was the same character he's played all 8 years on this show. It wasn't his funniest episode ever, and David has never been awarded this prize before. The plot was extremely clever, which could sway people into awarding the never-nominated David after years of great work, when, in my opinion, he isn't the best choice.
Verdict: The category is very weak this year, which could force people to write down the curmudgeon's name at long last. He is definitely in the running, but based on this tape, is not the most deserving.
Grade: 6.5/10 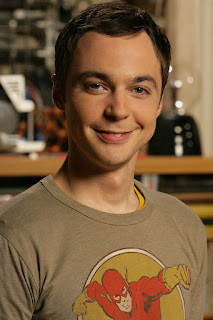 Jim Parsons as Sheldon Cooper in The Big Bang Theory
Submission Tape: "The Werewolf Transformation"
A.K.A. The One Where: Sheldon's barber is out of commission so he lets his hair grow out, leading to an existential crisis centered around bongo drums.
Notes: Parson's "transformation" was so lame! His hair grew a little long, so he vowed that chaos reigned over the universe. How did that translate to his actions? He started playing bongos late at night. That's about it. Parsons has won the last 2 years for this role, and a win for this would be a damn shame.
Verdict: He'll probably win this again. God I hope not. Freaking bongos.
Grade: 4.5/10


How My Ballot Would Look: