Hugh Bonneville as Robert Crawley in Downton Abbey
Submission: "Episode 7"
A.K.A. The One Where... Season finale, where Robert must testify against Bates and finds out about Mary's Season 1 scandal.

Steve Buscemi as Nucky Thompson in Boardwalk Empire
Submission: "Two Boats and a Lifegaurd"
A.K.A. The One Where... Nucky's father dies and he must go to the funeral. He gives up his treasurer position and control of the town to the Darmodys, and is plagued by a recurring dream.

Bryan Cranston as Walter White in Breaking Bad
Submission: "Crawl Space"
A.K.A. The One Where... Walt is tazed and brought before Gus after accidentally accompanying Hank to the laundromat, where Gus threatens to kill his family. Walt tries to check out of the drug game and change the family's identities by calling Saul's contact, but he comes up short for money after Skyler paid off Ted's bills. He ends the episode laughing maniacally in the crawl space.

Michael C. Hall as Dexter Morgan in Dexter
Submission: "Nebraska"
A.K.A. The One Where... Dexter flees with his subconscious dead brother Brian to Nebraska to confront Jonah Mitchell, who he believes killed the rest of the Mitchell clan in the name of the Trinity Killer. Along the way, Dexter acts out by having sex with a gas station employee, shooting a gun and killing a pot dealer among his crops. Dex lets Jonah live and abandons Brian to return to his normal life.

Jon Hamm as Don Draper in Mad Men
Submission: "The Other Woman"
A.K.A The One Where... Don struggles with the Jaguar pitch and refuses the company allow Joan to sell herself out. What he doesn't know is that she does so anyway, after his rousing pitch session. Also, after treating Peggy like garbage, he must deal with her resignation from SCDP.

Damian Lewis as Sgt. Nick Brody in Homeland
Submission: "Marine One"
A.K.A. The One Where... Brody's plan comes together in the season finale. where he has the opportunity to take out the morally tainted Vice President, but is talked down by his daughter. In the end, he makes a new plan and gives some closure to his affair with Carrie.

Notes: Bonneville is out of his league here, as the overlong episode doesn't showcase his strengths. Hall is so uncharacteristic of the character in this episode it made me uncomfortable. Buscemi submitted well but doesn't pack enough punch- he's still only half a gangster at this point, and he should have submitted the finale. Hamm did some great work, especially with the kiss, but this is not a winning episode.

Verdict: It's a tie for me between Cranston and Lewis, and either winning would be fantastic. I think "Crawl Space" was the best dramatic episode of TV in the season, but "Marine One" should not be counted out. However, over the course of the season, Cranston did more amazing work than Lewis. Cranston has won this award three times before, so we'll see if the streak continues or if Lewis is given a shot at gold. 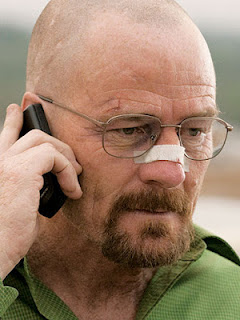