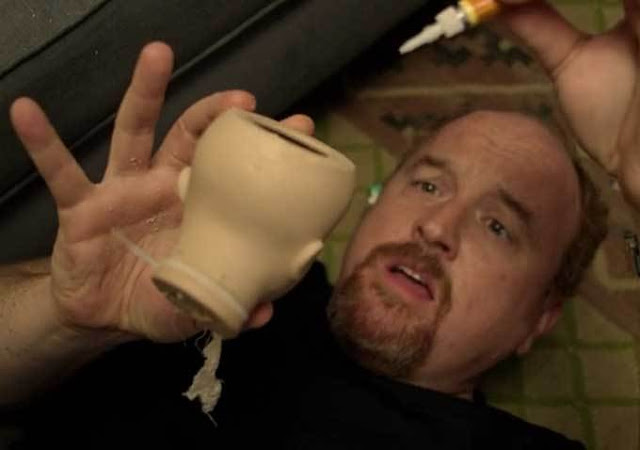 ML- My apologies go out for not regularly covering this brilliant show every week like I intended- hopefully this will partly make up for it.

Fans of Louis C.K. know the man doesn't like to do what everyone else is doing or what anyone else tells him to do. Why sell tickets through Ticketmaster when he can do so through his own website? Why act honored and humbled while accepting your Emmys when you can pull off a joke at their expense? This season, and this episode in particular, gave us great insights into Louie's off-kilter frame of reference while providing sincere moments of comedy, drama, horror and awkwardness.

Before getting into the finale itself, let's relish in the greatest triumph of the season- the Tonight Show arc. While rarely funny, these three episodes told the story of a man too scared to even attempt to succeed that he'd rather settle for self-pitying in his ordinary life. We've seen him do stand-up, and it's clear he thinks of himself as a halfway decent comedian, but when the opportunity of a lifetime presents itself, he shuts down. He can't tell a joke on command because he isn't "that kind of funny". Everything about the Tonight Show style of comedy (read: the kind that gets you fame and money for years and years) is the antithesis of Louie's character, and we truly get to see how off-the-beaten path he is. He doesn't want to wear a suit or give in to gimmicks and playful banter. When he does, however, after a betrayal by Seinfeld, and still fails, it hurts.

Sure, the story was inspirational in the sense a small victory attributed to the lengths he went to was good enough, but I don't think thats what made those episodes so great. We saw how painfully unfunny Louie would be if he were like any other comedian you can watch on a Thursday night. In doing so, we gain a greater appreciation for the Louie that he is and are relieved it didn't work out. Louie, too, learned about himself and the things he can do if he sets his mind to them- not only are things like weight loss possible, but he could be a damn good host if he wanted to. The beautiful thing is, Letterman or Ferguson or Leno couldn't dream of doing what Louie does every week on this show.

The episode began on Christmas morning. Louie watched the girls open their presents and saw the sheer joy on their faces, and remembered back to the night before and all the shit he had to go through to give them the perfect Christmas. His struggle with the doll alone should win him an Emmy for next year; he swears, he cries, he pisses on its face and drills into its head. Let's see Jon Cryer do that.

His younger daughter, Jane (one of my favorite parts of the entire show for her consistent reading of the line "Daddy..." and her amazing violin scene at the beginning of the episode "Dad", perhaps the season's best single scene) gets the book The Story About Ping and asks Louie to read it to her. He does, and tells her the story about the duck who lives on the Yangtze River -- a nice place to live, Jane points out. The duck imagery harkens back to the episode "Duckling" from last season, in which Jane snuck a baby duck in his bag for his trip to Afghanistan. I'd like to think this is a metaphor for Louie himself, the perpetual ugly duckling who will never turn into a swan.

His ex arrives and takes the girls off for a trip overseas for a few weeks. Without them, Louie wastes no time roughly dismantling the tree and tossing it out the window, then shutting the blinds and crawling in bed. What wakes him at 3PM is a call from his sister Debbie (Amy Poehler), who invites him to spend New Years Eve in Mexico with her and her husband (who refers to Louie as "the funny man" and bought the ticket at the "left wing Kennedy airport").

A small yet extremely important detail is fleshed out here- they're going to visit their abuelita, or Mexican for Grandmother. So Louie, the biggest ginger on the planet, has a Mexican grandmother, and produced all-white daughters with an African-American wife. Here, CK boils race down to a non-factor in both the creative and casting processes, a crowning achievement in the realm of social equality. Who cares if the mother of his children is black and his grandmother Mexican? You may giggle at the logistics, but in Louie's reality, race is a non-factor, and that's an ideal we should be striving for both in Hollywood and in our hearts.

Louie provided a lot of social commentary this season, but some that piqued my interest were the ways television shows were presented. All we really saw on Louie's TV were crappy reality shows and offensive news broadcasts. For someone as cynical as CK, it's no wonder these are things he chooses to show us, because you can flip to any channel throughout the day and find them. We live in a weird world where getting on TV no longer requires any sort of talent, and the definition of "news" has expanded to cover just about everything in our increasingly impatient society. Louie is an exquisite talent who doesn't mind taking a full episode (or an arc) to make a simple point or joke. He's right to be mocking the things on TV that aren't up to par because he's created some of the most poignant, funny moments of the last year.

Another thing CK succeeds with is dream sequences/exaggerations. I've always been iffy on dream sequences in shows, as they're often too on-the-nose and a cop out for externalizing internal struggles within characters that should be worked out in other ways. However, in the episode "Dad" and here tonight, we got prime examples of the best ways to handle such scenarios. In "Dad", Louie imagined even the GPS was calling him out on his fears and, when he couldn't man up and face his father, dramatically escaped to the middle of the ocean in a speedboat. Was it over the top and completely unrealistic? Yes, but it conveyed an emotion that CK's face just can't express on its own.

The dream of Lily and Jane, "probably in their twenties", focusing on a "career-y thing" and being an artist, probably, while old Louie sits "all alone" just eating pinwheel cookies and continuing to screw up their lives also expresses his fears as a parent in the perfect way possible. He's constantly putting himself and his abilities down, and after Christmas, when expectations are so high, it fits the moment for him to dream about being a lifelong letdown.

Louie packs his bags and heads to the airport. On the bus, however, he catches a glimpse of Liz, aka the Manic Pixie Dream Girl played by Parker Posey in the "Daddy's Girlfriend" arc early in the season. At this point, the audience expects a romantic reunion, that he'll bring her to Mexico to meet the family, and maybe not be all alone after all.

Nope. She sees him and he approaches, and she suffers a brain hemorrhage and bleeds out of her nose.

He follows her to the hospital, where he tells the nurse about her childhood cancer, but she says it's not looking good. Liz asks Louie if she's dying and he tries to comfort her. After an unsure "Bye Louie?" she flatlines and is pronounced dead at 11:59. The rest of the doctors celebrate the New Year with a countdown, but Louie is in shock.

What is there to even say about that scene? CK is a genius and deserves his writing Emmy, no doubt. I guess it all comes down to the idea that shit happens, and there's no rhyme or reason to the bad things that happen to us, or when or why they happen. But they will happen, and they'll happen to Louie.

Instead of going to Mexico to be with family, Louie remembers what Jane said about the Yangtze and hops a flight to Beijing to sit by the river. After having no luck communicating with the Chinese people, he finds a man with a truck full of ducks who offers to drive him to the Yangtze. They get there, only to discover it wasn't what Louie expected it to be. Shocker, right? It's barely a stream of water running through a grassy wetland. I don't know my geography well enough to assume the man brought him to the wrong place or if this actually is the Yangtze, but I think the latter explanation is the most meaningful.

For a comedy, Louie is a sad, sad show. He never gets what he wants. He has no luck with women, and the ones that like him die. He gets very little respect, or gratitude, or admiration, or fame, or money, or good fortune. And while we often laugh at characters like these, CK has a quality that transcends the general schadenfreude we feel towards sitcom characters and really allows us to empathize with Louie. We have his same pains, and insecurities, and struggles, and minimal triumphs. While our girlfriends don't die and we don't have disappointing trips to China, we all know what he's going through. He appeals to the masses by showing us how worse off things could be for us by making all the bad stuff happen to him. He's basically the Jesus of dramedy.

The episode ends with Louie wandering into a house and bonding with a bunch of Chinese strangers. Other people end their holiday episodes with the main character in the presence of family and loved ones. Louie disregards what other shows do. For someone like Louie, he's as out of place among his own family as he is with the Chinese strangers. He might as well enjoy the food.

Posted by Dual Redundancy at 1:09 PM