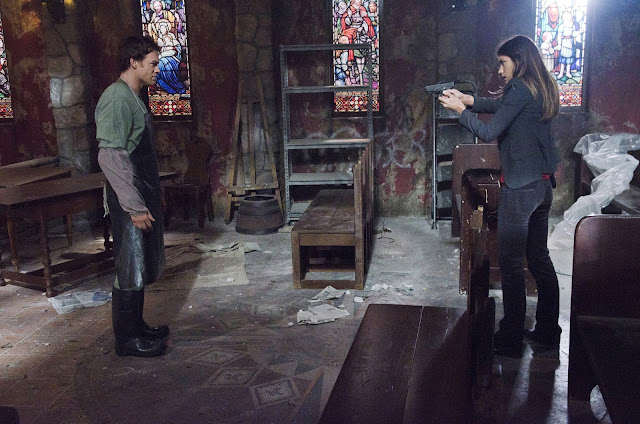 DA- Everyone’s favorite serial killer is back and after a painful season six let’s hope we can all have a killer time in lucky season number seven.

The episode begins with a speed round version of season six which I wish was how long season six lasted all together. (Notice how they completely skipped over the Professor Gellar character and the big “reveal” about who he was). In a Breaking Bad flash-forward we see Dexter on the run and off to the airport booking a flight to Budapest in cash since his credit cards are declining. Did Deb actually turn Dexter in?

Nope. Flashback to the church where Deb just witnessed Dexter plunge a knife into Travis Marshall and is at a lost for words. Luckily Dexter has excuses from an excuse roll-a-dex to pull things from including still being torn up from Rita’s death in season four. However it was the idea of Dexter entering a psych ward and losing Harrison that got to her the most. They plan on making it look like a suicide (Travis was disappointed that he failed his mission) before they burn the church down since fire is “biblical.” But guys I think you are forgetting that snakes are too! Why not rent a giant snake from the zoo and have Travis be eaten alive by the devil! No wait let’s just flood Miami and have Deb, Dexter, and Harrison float away in a giant ark. It worked so well for Evan Almighty!

No matter what they do they of course trick the crime fighters at Miami Metro. While Batista is easily convinced, LaGuerta finds a blood slide left behind by Dexter. Uh-oh spaghettio’s! Meanwhile Detective Mike on his way to search for Travis’ absent car tries to help out a roadside bystander. As soon as he opens the trunk and says he is a cop he finds a dead body and is shot down. So much for being a Good Samaritan!

Deb meanwhile is starting to get suspicious and finally seeing through the lies Dexter has been feeding her for all these years. Why did Dexter have all that plastic wrap, knives, and outfit ready when he was defending himself from Travis? Most importantly the crime scene looks exactly the same to the time she was wrapped in plastic to the table in season one! This is only confirmed when Deb finds the files in the evidence storage room. Maybe Dexter should have pulled a Walter White, used some magnets and somehow destroy the evidence in the room as well.

Despite all this Dexter still has Deb slightly wrapped around her finger. He turns the table on her and asks what she was doing there at the church? Sure I killed Travis but why were you there Deb?

After finding out who was driving the car with the dead body in the trunk (thanks to his fingerprint identification iPhone app probably available on iTunes) Dex feels the need to go and kill this guy before Miami Metro finds out about him. WHY? He says he wants to be in control but Dexter take a break. Deb just caught you and you are skating on thin ice here as it is!

But Dexter likes cutting it close. Cue the flash-forward from the opening, which is now just a forward I guess. After Louis canceled Dexter’s credit cards (because he was rude to him) he continues to race to the airport using only large sums of cash. After using a fake passport and getting caught with his “diabetes shots” he makes it in and finds the man who shot Mike. After sedating him in a bathroom and suffocating him with a plastic bag in a side airport room, Dexter succeeds once again and walks out of the airport (and past the cameras) with another trophy for his blood slide collection.

Skipping right past the unnecessary and boring Batista and Quinn storyline, Deb looks around for Dexter only to find Masuka taking the late shift at work so Dex can do the morning one. Determined to find her killer brother Deb calls the apartment and talks with Jamie who says Dexter is working late like usual. Uh oh even more spaghettio’s!

Back at the lab LaGuerta asks Vince if it is common procedure to take blood slides at the crime scenes for evidence. He says there was only one Miami Metro officer who ever did that and he was the Bay Harbor Butcher. As Doakes’ close friend and a believer that he never did those crimes in season two, LaGuerta may now have her evidence to help prove his innocence. But instead of leaving it in the evidence bin she takes it which I am sure creates a legal situation if ever used in a future case.

Dexter arrives home after a crazy day only to see his place ransacked. His knives, blood slides, and Ice Truck Killer hand lies on the table clear as day. Deb on the opposite side of the table simply asks him “are you…are you a serial killer?” He responds without any more options or excuses with a simple “yes.”

Overall I am very optimistic with the upcoming season now that there seems to be an end plan in sight. While this episode was not perfect it certainly raised the stakes for Dexter who usually has everything work out for him in the end. I can not wait to see how this plays out for Dexter and how much Deb and Miami Metro learns this season regarding the Ice Truck Killer, the Bay Harbor Butcher, and maybe even Kyle Butler himself, Dexter Morgan.

Posted by Dual Redundancy at 12:57 PM