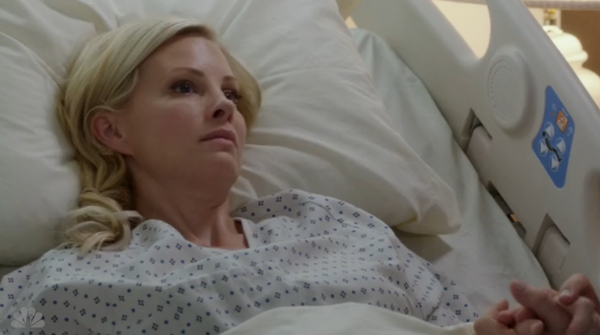 ML- This was an incredibly strong episode that juggled many emotions and storylines perfectly... until the last act, when some balls were dropped.

Kristina's struggle was handled with grace, and the inevitable (and foreseeable) conclusion that the cancer had spread resonated greatly.  She put on such a strong face to everyone, especially Max, whose election speech she missed to go in for surgery. She came off as the perfect mother; once out of surgery, the first question she had was about her son, not her own well-being. That's quite an admirable feat for the character.

Then, she resorted to selfishness. As hard as her path has been and will continue to be, the decision to lie to Haddie and send her back to Cornell thinking everything is A-ok was unsettling. Perhaps it's because I'm Haddie's age and see things more from her perspective than Kristina and Adam's, but it seemed like they were treating her like a useless child who didn't need the burden. Haddie has proven herself to be a mature girl capable of helping the family, and perhaps taking the semester off from Cornell would benefit everyone. Now, they've lied to their daughter, which will obviously come back to bite them and strain the relationship once again. Honesty is the best policy, and now they've added even more stress to Kristina's life when they could have gained another set of helping hands.

The scenes of Adam and his siblings in the waiting room were touching and provided some much-needed humor. Everyone offering him tea was a quirky running joke that sent him into a fuss, but reminded us how strong the rest of the family becomes when one link is weakened. I've complimented Krause before and having nothing but good things to say about him again. Brilliant work.

Max Burkholder still continues to amaze as well. Leading up to the election, we all knew Max was in trouble. He refused to recieve any help or admit to nervousness. Kristina and Haddie did their best to get through, but it appeared nothing fazed him -- until he took the stage and delivered his one and only campaign promise: vending machines.

The crowd was silent, holding back laughter. It wasn't until Haddie's comment on his tenaciousness inspired him to keep talking, bringing up his Aspergers and framing it as a positive driving force in keeping his promises. In the most Hollywood of endings, the room erupted with applause and Max went on to win the election.

However sweet this was, it strayed from some of the more realistic handling of issues Parenthood has given us. These kids probably wouldn't have changed their opinions of Max that greatly after one speech. Anything is possible, however, and the moment was a triumph for Max, so I'll let the writers off  more easily here than with Haddie.

The other moment that bugged me was Crosby praying with Jabbar. Crosby proved this episode he's still the least-reliable Braverman, though probably the most eager-to-please. He took on the responsibility of both picking up dinner and walking the dog, which ended in the dog needing stitches and the food arriving late. After his support of Adam, he returned home for Jabbar's only scene and asked him to teach him to pray. Unless this is the start of a major character transformation for Crosby, it was definitely out of character and unrealistic for an agnostic dad to ask the young kid out of the blue for praying advice. Again, it makes for a sweet moment, but my eyes rolled. I'm all for Jabbar being the religious Yoda to Crosby's Luke Skywalker (sorry, the whole Lucasfilm/Disney deal is still on my mind) but it'll need further fleshing out.

I'm all for Ryan and Amber. It was totally realistic for her to invite him in and him to be hesitant, and it speaks volumes for the future of their relationship. This isn't some immature lust-ridden humpathon. Let's see these crazy kids settle down, ensuring all Friday Night Lights actors find steady, fulfilling work. That'd be nifty.

Drew was definitely not being nifty this week, if that is an appropriate use of the word. He complained about his move into Mark's house, refused to pack, threw his clothes out the window and bitched about lack of cable. Watching this with friends, we had differing opinions on his acting out. One friend thought he was being a baby, and that as a high school senior it shouldn't matter where he was living (since he didn't switch schools) and he should be supportive of his mother. I agree he was acting immature, but remembered he had gone through many other uprootings with Sarah and wanted some stability for his senior year, one that didn't involve ridicule from sleeping under the same roof as his teacher. I'm glad he and Sarah and Mark patched things up (pretty quickly, but whatever) and can start settling down.

Hank is still a factor, though, Sarah was definitely unsure about her feelings for him while chatting with Adam at the hospital. Could yet another displacement strain the Drew relationship further? Between him and Haddie, these damn Bravermans need to get their heads straight!