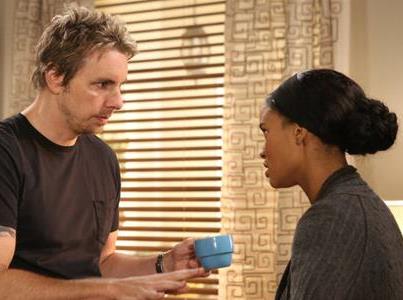 ML- Yup. They went there.

Crosby's recording session with some... verbose rappers was interrupted by a curious Jabbar, who was subjected to his very first utterance of the "n word". As the whitest guy you'll ever meet, I probably would have handled the situation similarly to how Crosby did- compare the word to that of "Voldemort" in Harry Potter. It took Jasmine, who stepped up to the plate as an incredibly powerful, likable character and mother this week, to share her personal perspective on the word and its history with her son, teaching an important lesson to Jabbar, Crosby and the audience alike.

The story about how her mother had the same conversation while Jasmine was Jabbar's age struck a chord with me- this issue has been passed down from generation to generation for as long as anyone living can remember. Sure, there's the "we have a black president" argument of universal tolerance, but racism still exists and is strong in many parts of the country. The fact that, as Jasmine says, the world has gotten better with every generation is a comforting thought, but it's ignorant to expect Jabbar's life as a half white, half black child to be nothing but smooth sailing.

Crosby's reaction to The Talk was a great moment as well. It's a word that will never, ever hurt him but carries so much weight and anger against the people he loves most. He can never relate to Jabbar in this scenario, and that scares him and makes him feel inadequate. As Jasmine points out, though, there are a bunch of issues associated with being a boy that she can't tackle. As irritating as these two characters have been on their own and as a couple, they always, always knock it out of the park when they focus on being parents.

Speaking of knocking it out of the park, can we talk about Sam Jaeger? Not only did he direct last week's awesome episode, he got to shine as an actor this week as well. Victor was destined to fail at baseball, mostly because he'd never really played before as far as we knew. Watching baseball, he quickly found, was not the same as swinging a bat. He put in the effort, though, as did Joel as a team dad, but he couldn't follow through and stormed off the field in an angry rage.

When Joel confronts Victor later to tell him how proud he is, you believe it. Victor has been through so much, most of which we've never heard about but hopefully will one day. To adjust to the big Braverman clan as (seemingly) painlessly as he's done and be willing to try new things shows a strong character. Julia and Joel have another great kid on their hands, and the game of catch at the end shows how both of them realize it.

Hank was nervous about spending time with his own daughter, Ruby, who visits once a month for a weekend. She's changing, he notes; she used to be a quiet, shy girl who needed her dad, now he feels more like an inconvenience to her life. She doesn't help his confidence any, shooting down his attempts to play mini-golf and chat about The Hunger Games. When Hank has to go off on a shoot, Ruby elects to stay behind with Sarah rather than spend time with dad, a crucial blow.

Sarah pulls off a sly bonding caper when she gets Ruby to help her with the lights and discovers the real issue is that Ruby is missing Aubrey Peterson's totally epic co-ed pool party because she has to be with dad, and all her friends are doing cool things while she's being boring. Sarah suggests the classic motto of "When in doubt, lie" and tells her to say she's at a photoshoot... with Justin Bieber. Ruby jumps at this, and Hank arrives later to help Photoshop a picture of them together. Now both officially awesome, Hank and Sarah share in their victory. Sarah later finds photos Hank took before Ruby was born, when he had to give up his dram to be a dad. She offers he hang them up, but they're too hard to look at.

Yes, on paper Sarah and Hank are a better pair than Sarah and Mark, but I'm not happy about the inevitable end to the engagement. Hank is far too much of a curmudgeon to make it work with goofy Sarah in the long run.

I was proud of Max this week. He was able to go up to 29 strangers and state his case for his student council campaign, receiving the 25 necessary signatures. Adam and Kristina were proud, too, but devastated when they saw many of the signatures were fake names and offensive messages to the oblivious Max. The disagreed over whether Max should keep running- Adam thought it would be better to spare him the embarrassment and ridicule, Kristina thought they should support his newfound motivation. I was totally Team Kristina here- harsh words said against Max would probably roll off his shoulders quickly based on his emotional capacity, but being denied something he wanted would grind his gears. If he loses, I think he will understand and be content, but he must at least try.

The underlying subtext of the matter was Kristina's upcoming surgery, which she wanted to postpone until she could get Max's campaign underway. Let's not forget Kristina was a campaign organizer in the past, though the show mostly has, especially the candidate from last year who Amber was involved with. Adam disagreed here, too, siding with the doctor that she should get the tumor out sooner rather than later. In the end they reached a compromise: Max would run, but Kristina would have the earlier surgery.

As great as all of these story lines were (really, all of them clicked), my favorite was that between Zeek and his new friend, Ryan York (played by FNL alum Matt Lauria). Zeek had so little to do that he made a huge deal out of an air sound coming from his sprinklers, a hilarious but totally understandable issue for a retired man his age. Camille suggests he volunteer his efforts at the VA, and he begrudgingly agrees.

At first, he blends into the background to avoid actual responsibility. Ryan strikes up a conversation about burned coffee (which Zeek made) and the two quickly find a common bond -- Ryan just arrived back from Afghanistan and was having trouble adjusting. Zeek advised him that things get better, though for a while you lose your sense of identity.

Ryan seemed genuinely helped by the old man, and Zeek got paid back when Ryan, a former irrigation specialist, pinpoints the problem with the sprinklers. Together they form an unlikely pair, both unappreciated in an ever-changing world they just can't quite adjust to. When Zeek returns to the VA, he asks for a job that can really allow him to make a difference. Zeek has raised such brilliant kids, mentoring another will undoubtedly lead to good things!

Posted by Dual Redundancy at 3:02 PM