TV Review: Parenthood 4x05: "There's Something I Need to Tell You" 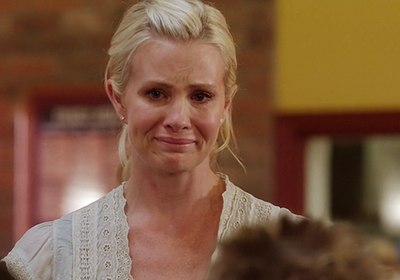 ML- Many people proclaimed this episode as one of the series' best, but I don't think it even matched a season-high. My biggest problem was with the ending -- Kristina's initial disclosure of her condition to Adam was a poignant moment void of any dialogue. It worked because we knew what they were saying and we still got to see the emotion. It was fresh and honest.

By using the same device again here when Kristina told everyone made it seem like a cop-out. If I were watching this as her Emmy tape, I'd want to see her force out every last word to these people. They're not her birth family, remember. She married into them and has never wanted to be a source of pain in their happy charming lives. So for her to drop a weight like this on all of them is a character-defining moment, and just this once I didn't want it to be glossed over with a musical montage.

The other thing that bothered me was Julia's decision to quit her job. How stressful was one extra kid to her routine, really? In actuality, not much, but the psychological toll was obviously enough for her to burn breakfast and miss an important deadline on a rookie assignment. She expected the partners to cut her loose, and when they didn't she should have counted her blessings and tried to give them her all. If it didn't work out, at least she'd get a severance package when they fired her! Quitting, while more dramatic, puts her and contractor husband Joel in a tough financial position.

How great was it to see Victor pull a Raul Ibanez in the big game (playing for the Panthers, naturally. Nice touch Katims) and Zeke get justified in his annoying grandfatherly efforts. The game also introduced a couple that has me incredibly excited- Amber and Ryan. After a bunch of questionable lays, could this war vet be the right guy to sweep her off her feet? Now we just need Haddie to hook up with Zach Gilford and Drew to get with Aimee Teegarden and the Friday Night Lights spin-off will be essentially completed.

I'm still not sold on Hank and Sarah. For him to say the kiss wasn't nothing was expected, but still obnoxious. Her decision to move in with Mark definitely isn't 100% genuine, but at least will giv Jason Ritter more screen time! Give these two crazy kids a chance. All kidding aside, the writers did a great job building Mark's character last year, they can keep the relationship interesting if they really want to.

The best scene of the episode was Adam's phone call with Haddie. Peter Krause is masterful at expressing emotion in his face, and the call with Haddie was realistic and heartbreaking. Seeing Haddie was welcome, and I'm surprised the show hasn't detailed more of her college exploits. Likewise, Max's talk with Amber about cancer was an amazing touch for the character and the episode as a whole. Burkholder is spectacular in the role, as unforgiving as it may be.

Crosby's story was annoying but I'm glad he's getting his due with Adam. Blessings upon all the Bravermans, especially Kristina in her rough time. But writers, please, show us the intimate moments rather than playing for tears with your inspired soundtrack.