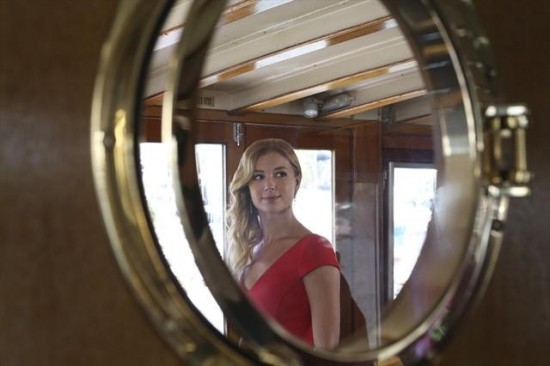 ML- "Destiny" is a touchy subject when it comes to television- there are so many factors coming into play that character arcs and relationships don't always end up where writers and producers intend. And, let's be honest, the only God when it comes to television is the showrunner and the folks in the writer's room. If I were a betting man, I'd say Daniel was originally supposed to die on the beach in season 1, but the fan's reaction kept him alive and Tyler bit the bullet instead. On-set behind the scenes drama can lead to characters being written out long before their welcome. Low ratings can cut promising programs down within a matter of weeks.

Revenge survived to a second season and begins much like the first season- with a glimpse of a mid-season tragedy that will most likely not be what it seems. This time, we saw Jack Porter's boat, the Amanda, on the bottom of the ocean, along with it Jack's pocket watch and a body with manly arms. All signs point to Jack. So, naturally, Jack is destined to survive to Season 5.

This season premiere was much less juicy than the pilot last year, and hopefully that's a sign of the show setting up plot lines and not losing steam. Unfortunately, nothing new or exciting was really set up, we just got continuations of everything from last year. Victoria being alive was a surprise to nobody, except maybe Emily. Amanda's paternity test was something we all were clamoring for.

Everything about Conrad bores me and I wish they had killed him last year instead of fake-killing Victoria. His manipulation of Charlotte was smart and unexpected for me, as I expected Emily to be behind the blood-test snafu. Charlotte was less annoying already, and I'd love to see her join in the Revenge-ing with Emily and Nolan to form a team of superheroes called... wait for it... THE REVENGERS. Nolan can be Tony Stark with his money! Emily can be Thor with her blonde hair! Charlotte can be the Hulk with her pill addiction! (Stretching/completely making up that last one). Now just turn Declan from scrawny punk to buff hunk and he's Captain America.

A few characters seem to be in new, interesting places: Nolan's post-torture boxing regiment and the sale of his house signals a psychological shift, but his quippy lines felt tired already. Apparently we're getting an origin story for him, which I'm torn over. He's one of the most interesting characters on the show, but that's because everything about him is so ambiguous. Shedding light on his demons could remove all the excitement that surrounds him and ultimately let us down.

Daniel and Ashley are the other characters on the show that excite me. Sure, Daniel is currently being relegated to brooding with a drink in hand like some lowly Twilight vampire, but his history of reckless endangerment while under the influence should lead to some questionable decisions. And Ashley, who I've long suspected to be up to no good, seemed like a much more confident, sinister character, as if the actress was given a direction she can't share with the audience, but it drastically is affecting her performance. Either way, These two could be a dastardly duo to tear the Hamptons apart.

Lastly, Emily, who nearly drowned herself to unlock repressed memories about her mother, needs to step it up this season. Her take-down of the buff guy at Takeda's side was a fine reminder of her prowess last season, but I'm expecting more. I know, I know, they can't play all their cards in the first episode, but this is REVENGEEE, people. I need balls to the wall craziness or else I realize how primetime network soap this all is.

Posted by Dual Redundancy at 7:41 PM