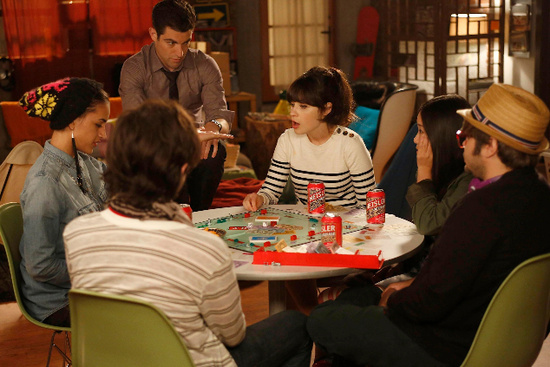 DA- Who wants to start an Arcade Fire? It’s a TGIF marathon on New Girl tonight, well for Jess at least. But in the end thank god it was Tuesday because we got another consistently funny New Girl episode to discuss.

Instead of working on her resume to get a new job, Jess instead has been “practicing” dropping things as Steve Urkel from Family Matters. This saddens Schmidt. He liked the old Jess. You know the one that was inspiring and did not work at Casserole Shanty. However after a group of “hipster” millennials move in across the hall, Schmidt wishes both types of Jess stay away as he proves he is still the cooler one of the group.

One of the reasons why Schmidt wants to prove he still has it is because the guys call him old. Although he says he is going to live forever. At least that is what his $49.95 real lifetime expectancy service says. Even though Schmidt will be alive for robot sex, according to the site Winston only has a few years left to live!

After an awkward evening hanging with the youngins it looks like Jess wins.  She is similar to them and is still figuring her life out while Schmidt on the other hand is a like a lame parent who ruins a movie like Top Gun. At first it looks like Jess may lose it all when she spills popcorn but thankfully with the help of a famous Urkel line they have never heard of she wins them over. While I find this hard to believe (I am their same age and could understand all the TGIF references) we still feel happy for Jess because it is nice to see her get along and casser-roll.

Meanwhile Nick decides to start pranking Schmidt to make him think he is getting older. He shaves down his shoes a 1/8 of an inch, makes Schmidt’s pants longer, pretends he is deaf, and switches his fiber pills to make him constipated. He also goes above and beyond by taking a picture of the wall where Schmidt keeps track of his height shrinks it down and plasters the reduction back up.

Sound like a lot? Well Nick has been up since five for this new goal. Someone has to do it because his partner in crime Winston can never find the prank sweet spot. He either goes too far or too little. Then again maybe Nick is wrong. He wants to sprinkle the shoe shavings by Schmidt’s car outside to really mess with him. What do you think? Sounds crazy and prank-like to me.

Despite the signs, Schmidt will not admit that he is growing old and uncool so he decides to ask visor-wearing Jess for help. Unfortunately he didn’t listen to a word of her advice. From wearing a scarf and t-shirt combo and performing parkour, he is considered the opposite of cool (which I guess would be hot). However again here is where the kids are wrong. Schmidt can perform all the parkour he wants in my apartment (but if he ruins Top Gun that is where I draw the line).

But after realizing these are not the people to impress, Jess comes clean about her impressions and how she cannot hang out with them anymore. They try to get her back only for them to realize she is friends with the old cranky man from the stairs (Nick).

Meanwhile Schmidt still cannot understand why Jess gave up again but she explains to him that she did not give up teaching but she got fired. He understands but begs her to not give up teaching even if it is only a smile class (which I would get a straight A in if offered at Ithaca). In other Schmidt revelations, he learns that the kids do not hate him because he is old but because he is an “asshead” with a terrible personality. This excites him. He cannot change his age but his personality, that’s fixable! (Don’t change for them Schmidt. They do not even know if a dish dryer exists or not!)

In Winston C-story news, Winston runs in to a meeting at work and begs to have a new job. His wish is granted and he becomes a producer of a sports talk show…at 2:35 AM! In other words he will have about the same number of viewers Dual Redundancy had on ICTV! ZING!

But that is all for this week. As Stephanie Tanner would say (and later have her quote stolen by Jess) “how rude!” But don’t get mad at me. I will be back casser-rolling next week recapping another funny episode of New Girl. Until then watch out for people pranking you by hitting you with a ski. (Winston, I’m watching for you!)

Episode Grade: B+
Episode MVP: Schmidt (Max Greenfield) for parkouring in a scarf like only a grown man could.
Original Airdate: 10/9/12

Posted by Dual Redundancy at 10:45 PM