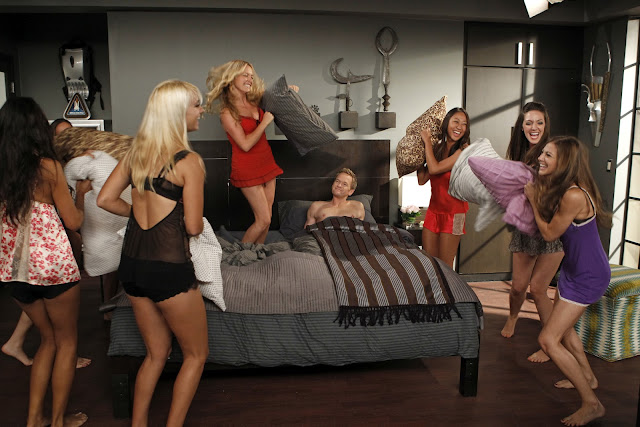 DA- After last week’s solid season opener the HIMYM gang created a small crack in our relationship with a so-so episode about autumn breakups. After skipping past the “summer of love” I wish we could have fast-forward just a little bit more to a juicier story or set of adventures.

This week Arthur Hobbs played by Bob Odenkirk convinces Barney to do a pre-nup before marrying Quinn because he may end up like him and god forbid have full custody of their kids! While Barney isn’t too interested with his possible real life kids he wants to make sure Ann, Sarah, and Molly stay with him for years to come (that is what he named Quinn’s lady parts). In case you are wondering, which I am sure you all were, Marshall calls Lily’s Snap, Crackle, and Pop. As for what I call my manhood…well that is a subject for another post.

In this pre-nup there are “suggestions” for their marriage so Barney stays interested in Quinn. These include paying him $2000 for every pound she gains and her responsibility of creating 10-12 new sexual positions a year. Even after Arthur crossed out Barney’s clauses about wives two through eight, Quinn was still very angry with Barney. However these problems did not stick with their relationship alone. Before all the couples went to bed the guys tell their respected girl that Barney had a point to want to change certain aspects of their relationship and that they wish they could. The girls in unison all ask “like what?” In a perfect yet cheesy act out we are told one of the four three couples will break up but which one will it be…

All the couples had their recent problems to fight about this week. Lily is freaked out that Marshall is too rough with Marvin but that is how he grew up. Robin is turned on and distracted by herself on television when fooling around with Nick. However Victoria is angry with Ted for going back on his word for letting her ex-fiancé live naked in their apartment with his pet ferrets. Let me repeat this so you can understand her complaint. Victoria’s naked ex-fiancé that she just left at the altar is living with them in the same apartment and Ted wants him out. Hopefully you can tell whose side I am on for this one.

However Quinn is not going to go down without a fight. She has a pre-nup for Barney too which includes a shock collar on Barney’s “snap, crackle, and pop” (if you catch my drift) and full custody of his suits. (She is just going to sit around and watch them go out of style).

The rest of the gang comes to support their same gender friend. They all fight but Saul Goodman as always comes to the rescue! Arthur tells them to say their true feelings because fighting for who has the power in the relationship is nothing to fight for when you are in love.

In no big surprise it is Quinn and Barney in the end that decide to put their relationship to rest because of trust issues. But again that should not be any surprise or shock to us. It was going to end sometime this season. We just saw last week that Robin and Barney are the ones that will end up together (without any need for a pre-nup I may add). Now that this all out in the open perhaps we can start on Barney’s last relationship before the big marriage. As long as the show does not stall even more with another Nora or Quinn before he ends up with Robin I’ll be happy and living a TV season of love.

Episode Grade: B-
Episode MVP: Thomas Lennon (for letting his ferrets all hang out as Klaus)
Original Airdate: 10/1/12

Posted by Dual Redundancy at 9:20 PM