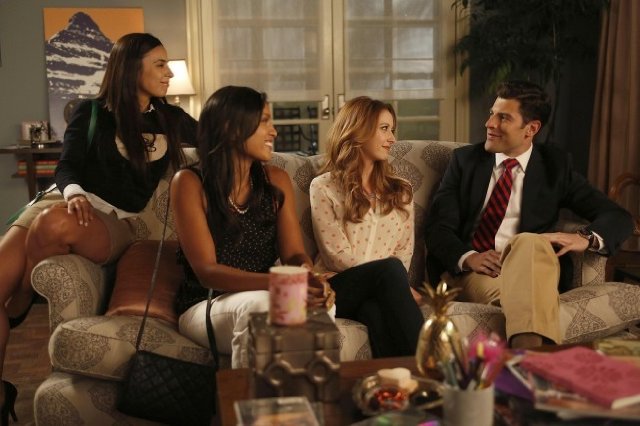 DA- The night starts off with a worried Jess waking up Nick in the middle of the night. What is she worried about? A demon under her bed? A break-in at the apartment? No she is just worried about talking after her casual sex with her new boy toy. She needs some advice from Nick since her first idea was to leave him with crayons and paper as she checks her non-existent fantasy football team. While Nick may not be ready for this episode to start and wants to go back to bed, I’m ready to check my stats so let’s go!

The guys all decide to go on a date with Jess to show her that she can talk with a guy and still have casual sex with him. They do this because it is their duty as friends to help their friends have meaningless sex. Of course Nick is the only one to show up at the restaurant. Schmidt is across town trying to meet his idol Kanye West. He brought along Winston (since he is black) and his Kanye-like whale belt in hopes of being Kanye’s last call of the night.

Jess and Nick still decide to have their date and to help loosen them up Jess snuck some wine in a thermos. Hopefully this never gets swapped with a kid at school (if she can get her job back) or some definite sitcom hijinks will ensue. Schmidt meanwhile cannot get in with his belt on. (Is it just me or do fashion “codes” at clubs and bars never make any sense. So just because it is after nine on Friday I can’t wear shorts in but any other time or day I can?) However next time I get turned away I may bust out Schmidt’s new lie of being Mitt Romney’s kid, Tad.

Inside the club Cece cannot believe anyone is mistaking Schmidt as a Romney. Winston as his security rushes her away when girls begin hitting on now Tad Tuggb Romney (there is a silent b and two g’s, for the correct spelling you are going to have to ask Tuggb). Meanwhile after Jess leaves the date when her boy texts her, Nick begins to feel like an emotional “fluffer.” He is just there to fill the boyfriend role without any of the rewards. When Nick brings this up to Jess she asks if he wants the rewards anyways. Instead of coming out and saying his true feelings, which we know, are there, he says only “sleeping Nick” has thought about that and that’s different. Nick says she needs her to have sex but Jess schedules a date to prove him wrong.

Unfortunately before Tuggb can seal the deal he begins to slip up about his father and family including all the times he drinks with his Mormon dad and how he is not in any Romney family photos (someone had to take the photo!) He comes home and spills to Cece why he liked believing Romney was his dad (Schmidt’s dad left him when he was 8). Cece tells him you have to forgive your dad because not everyone is a presidential candidate. She hugs him into her memory foam-like chest perhaps re-sparking their relationship flame in the process.

On Jess’ date she comes right out and asks him if friends can build someone a dresser (like Nick refused to do) without being in a relationship. He said he would maybe do it for the make a wish foundation or if they were married. By building furniture that implies you will share it someday together. Despite learning this and that Adele is another big no-no, Jess comes back to the apartment where Nick is building the dresser anyways. He is tired of people telling him what to do and he can build anything that he wants. The only condition for him is that he does not go on anymore pre-sex dates. While she agrees I have a feeling this will not be the last pre-sex date between Jess and Nick. The only difference will be how the date ends and whom Jess decides to “build a dresser with” if you catch my drift.

Eww. Not like that. You all disgust me. Tuggb Romney out!

Posted by Dual Redundancy at 12:59 PM