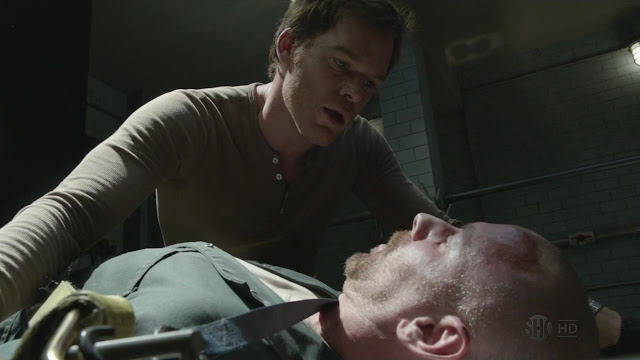 DA- As Deb entered the bathtub all we could think of was Rita. As the water turned red and wouldn’t stop Deb must have too. This leads to Deb instantly questioning Dexter now about season four and if he even loved Rita. He did and loves Deb too. Aww…

Thankfully they got Raymond Speltzer from last week and just need a confession. After a good cop/bad cop routine from Batista and Deb respectively they somehow got Raymond to come out and say “I should have killed you like I killed the other girls.” Woah that was easy. Unfortunately when they originally arrested him the cops beat him and it is unclear if Raymond was conscious or even able to follow his Miranda rights (he never verbally said yes). Because of this his confession is thrown out. Now I don’t know much about the justice system but this seems pretty darn stupid! Good thing we have someone like Dexter out there!

Meanwhile Sirko and his henchmen visit Alex who is a barkeeper at the club. They convince him to take the blame for Mike’s murder and kill himself in exchange for his family to receive a lot of money. This is literally the opposite of a suicide prevention hotline. Miami Metro finds the scene the next day and what happens next surprises me. Out of nowhere Batista becomes a good cop and doesn’t believe it was a suicide. It’s too neat. Who is this and what happened to Miami Metro?! Then again Quinn represents the department well. He wants to just forget this whole thing because this ordeal is “hard” for the stripper he is sleeping with. Oh pobre Quinn. Suck it up!

Dexter tries to take on Raymond only for him to get knocked out in the RV and wake up in a maze himself. The note next to him tells him to run but he says he doesn’t run but makes people run. He walks down the hall like a BAMF until he sees Raymond as a bull chase him with a giant axe. Even Dexter knows no matter how uncool it looks, this is the time to run!

He narrowly escapes and decides if this happens again he has to make sure he has nothing to lose (like he did in season four when chasing Trinity). He sends Harrison to Orlando to visit Astor and Cody (remember them?). Dexter tries again to get Raymond and leads him into a trap of his own. Raymond lets out a final yell and tells Dexter he is going to kill him, which Dexter wittingly responds, “that would be a twist.” The body goes into the furnace to be burned and perhaps the ashes will go to Fisher and Sons for a funeral service. (See what I did there?) Along with the body, Dexter gets rid of his blood slides. Finally Dexter realizes that it is a bad idea to hang on to the evidence of people you killed!

Deb sees the smoke coming out of the crematory and asks if Dexter did this for her. He says no (now this would be a good opportunity to say yes Dex) and asks her how she feels. She says she is glad and wonders what that makes her. Dexter simply tells her that this makes her human but I think he forgot to include this also makes her a psycho that is in love with your step-brother who is a serial killer. But hey, one step at a time.

Episode Grade: B
Episode MVP: Angel Batista (for finally being good at his job)
Original Airdate: 10/21/2012

Posted by Dual Redundancy at 2:44 PM