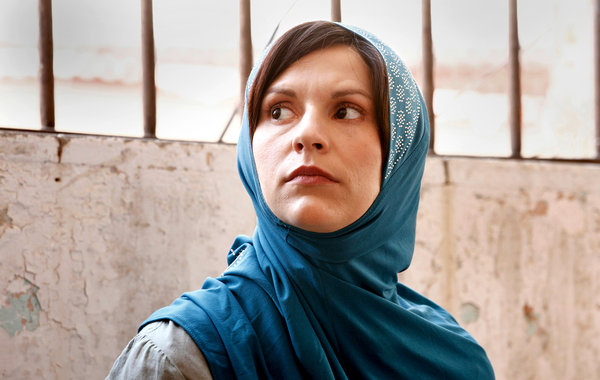 ML- When you think about it, both lead characters on Homeland are actually "bi-polar": Carrie, psychologically, and Brody, who serves double duty as a political candidate and a wannabe-terrorist. This week we saw both characters in one "state", then got to watch them swing from pole to pole.

Brody's shift was not voluntary. Thanks to Dana's outburst during her Quaker meeting at her fancy, friendless new private school that outed her father as a terrorist, Brody was forced to bury his Koran when an irrationally livid Jess threw it to the ground. He did it, however, to keep up his appearance as America's favorite ginger-haired congressman. His numbers are high enough that the Vice President is considering bestowing the same title upon Brody come election time. His wife is on her way to joining the cast of D.C. Housewives. And above all else, he's got a new buddy in the form of Roya (Lost's Zuleikha Robinson), who delivers an assignment from Abu Nazir to get a code from Estes' safe. She even lures Estes away while Brody can do the digging. Is it too soon to predict a terrorist tryst between these two?

Brody must continue to wear both the face of the family man and the threat to national security because he simply cannot choose between them. Who does Brody love more, Dana or Isa? I'd like to think his own daughter, but the lengths he has gone to in Isa's honor (and the look on his face when Roya brought up Isa's birthday) leave me with reasonable doubts. He's going to straddle the line between his heart and his faith all season, and there is no actor more capable to convey this struggle than Damian Lewis.

I felt bad for Morena Baccarin's Jess this week. She came off as so totally ignorant and opposed to Brody and his Muslim faith without giving him a chance to explain himself. Has she already latched onto the idea of becoming the next Jackie Kennedy? She better not alienate him too far or else she may see the same tragic end befall her husband. Granted, I'm probably as misinformed about the Muslim religion as the next guy, but my level of tolerance and acceptance is much greater. Between Jess and the obnoxious kid in Dana's class, the writers are being a little too over-the-top with the "ignorant American" card. Yes, it's a good way to add to the gray area and allow us to rationalize Brody's actions, but they could be a bit less on-the-nose.

Carrie, meanwhile, began the episode in the exact opposite place I expected her to be -- adamantly refusing the call back to action. She got a new job teaching English to Middle-Eastern Americans and was even gardening vegetables for a vegetable lasagna. The shots of her in the garden reminded me of last season when she hopped out of her sister's car to examine a plant, and how that plant represented how a plan develops from a tiny, hidden seed. Does this mean Carrie has tons of plans sprouting from her unstable brain? Or is she in the midst of a grand scheme she doesn't even realize the scope of yet?

Her family tried to keep some breaking news from her, but soon Saul and David Estes were beckoning for her to intervene. From what I gathered, there was an attack on 5 Iranian nuclear facilities and the suspected assailant is Israel, who had been threatened repeatedly by Iran. According to a rumor Roya brings up to Estes, however, one of the nuclear sites may still be functional. Regardless of that for now, a source recruited by Carrie years ago named Fatima Ali claimed to have information, but refused to talk to anyone but Carrie. Carrie bellows "how dare you"s at Estes after all the embarrassment he brought upon her, but we all know she'll take the assignment. It's who she is, what makes her tick. Vegetable lasagna can't sustain her forever.

Like Brody, she dons a veil of lies, this one in order to protect American lives. She becomes Kate Morrissey (though her mother was a DeCarlo) from Canada, brown wig and all. She wanders the streets of Beirut and talks to Saul on her cell, but once he notices some shady folks in a car behind her, she abandons the phone and books it. One man follows her, providing the most tense moment of the episode by far.

Carrie weaves through the marketplace but comes upon a dead end. The man approaches behind her. Thinking on her feet, she trades one head scarf for another and blends in to the crowd. This almost works, until she comes face to face with her predator. Again, she out-thinks him, kneeing him in the crotch and kicking his dropped gun away. After calling attention to him so that concerned onlookers crowd around, she escapes, and dons "The Smile" to which the episode title refers.

The Smile marks her shift back to Carrie of old, having crossed the threshold back into the extraordinary world. It marks the tipping point of her swing back to madness, a pendulum that will crush anything in its path. It marks the beginning of a new, sure-to-be-brilliant season of the worthy successor to Mad Men's reign of Emmy king.

Speaking of which- I'd like to take this platform to address a common conversation I've been engaged in- Homeland vs. Breaking Bad. Arguably, these two were the best shows of the last TV season, along with Mad Men. For some reason, tons of people have come out of the woodwork proclaiming that Homeland is better than Breaking Bad. In my opinion, it's too early to call. Comparing Homeland S1 to Breaking Bad S1 definitely favors the former show, but I've never seen a show that improves in literally every way like Breaking Bad has done. Once Homeland hits its inevitable Season 5 (Showtime doesn't like canceling things that are even remotely successful), we can come back and compare. For now, my vote still goes to Breaking Bad.

What say you? Is Carrie ruining her progress by going back to the source of her troubles? If given the chance, would Brody choose Dana or Isa? And which show is definitively better, Homeland or BB? Let your voice be heard in the comment section!

Posted by Dual Redundancy at 10:26 PM