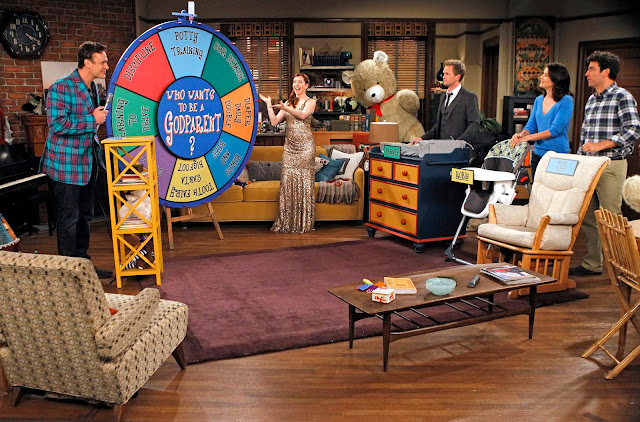 DA- After realizing that death is all around them, Lily and Marshall go to create a will but are unsure of who the godparents for Marvin should be. After speeding through arguments about each other parents (and allowing only a one second discussion about Lily’s dad) the rest of the gang wants to be considered too. Gifts start pouring in including giant teddy bears and even a stroller with a boob cam (any guess who created the latter?) Finally they decide there is only one way it can be decided; a cheesy 1970s game show! But first a word from our sponsors…

Robin, Ted, and Barney participate in “what-if” scenarios of parenting issues like delivering the news about their demise or the birds and the bees talk. Flashes are shown of how each would handle each situation. One flash not shown? How they would explain how their father met their mother because as we all know that is not a simple or short story! While each may be hilarious, Lily and Marshall are unsure they understand what it is like to be a parent. However they all retort that they are unsure they know how to be friends anymore.

This is due to the fact Lily and Marshall put in a rule that they could not be bothered with their problems unless it was an 8 or higher. While they say they do not have time to deal with their problems, they are going to name one of them as a godparent and they do not even know their lives anymore. They revoke the rule because everything they do is an 8 or higher to them.

Now going into this I thought Barney had a clear advantage. I mean he once thought Bob Barker was his dad and was very successful on The Price is Right in one of their best episodes ever. However in the end to no real surprise all three become godparents and Barney still tries using his boob stroller in the bar. Slightly predictable but still a solid episode that plays with the unique formula and situations this show has been known for.

Posted by Dual Redundancy at 1:48 PM