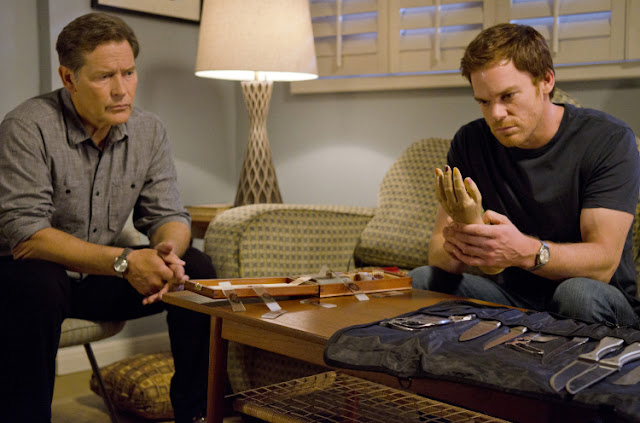 DA- Put yourself in Deb and Dexter’s shoes (one of each I guess). Your sister just found out you were a serial killer so what do you do? Of course chase her at full speed out of your apartment at night. Nothing scary about that! However I can see why Dexter did what he did. He is already running out of options and it is only episode two.

Within minutes Deb gets hit with more bomb shells. Dexter is the Bay Harbor Butcher, Harry taught him everything he knows, and that he has even given his darkness a name. Deb admits that she is the worst detective in the world to not see any of this but Deb you’re not. At least you found out unlike the entire crime team at Miami Metro. With emotions running high Dexter asks what she is going to do now and she does what I believe any woman finding a serial killer may do, punch him and get out of his apartment!

While Deb goes to research why serial killers do what they do (with her information coming from her once fling Frank Lundy), Dexter sees the hand from the Ice Truck Killer murders. Deb dragged it out and he wonders how did it get to him. After looking through the evidence locker Dex is told by Masuka that it was sold online to an unknown buyer. Not even whiz-kid Louis could find the name. Then it hits Dexter…oh yeah Louis.

Cut to Deb leading a meeting about Mike’s shooting. “Remember him?” she asks. Nope. But continue on Deb. Dexter volunteers to go investigate another crime scene only to be told no by his boss sister. It is all part of her master plan to fix Dexter and his “addiction” in her homemade rehab program. Dexter argues that dad tried this and it will never work but Deb reminds him he does not have any choice (because she is a lieutenant and can arrest him remember Dex?)

Meanwhile in other Miami Metro news, LaGuerta has had a private lab analyze the found blood side. It does belong to Travis Marshall. She later requests Bay Harbor Butcher evidence from the FBI only to see what could have been seen from a photograph that yes the slides he used is just like the slide she analyzed. Quinn also puts his great skills to the task and talks with the strippers at the club about the death of the prostitute and Mike. The stripper gives some information and asks Quinn to find the man and put a bullet in his head. He says that they do not technically do that. Well almost everyone…

Inside the Deb rehab program she decides to spend every waking moment with Dexter. Now Deb is this just an excuse for you to get closer to the guy you recently said you had growing feelings for? She probably will not want to after Dexter describes his dark passenger and how the blood trickles behind his eyelids becoming a black flood throughout his body. The pain is so intense that it feels like his head will explode. Oh come on Dexter. That’s just a migraine. Take some Advil. As for the black blood thing yeah you may want to get that checked out.

Unable to sneak out to investigate Louis’ apartment at night, Dexter tries to take over for Masuka in the field. He has to clear it with sister first who says of course but she is coming too. Thankfully tweedledee and tweedledum (Batista and Quinn) arrive to pull Deb away so Dexter can break into Louis house. What Dexter finds on Louis’ computer even scares him and he is a serial killer. Not only does he have a video exclaiming how he wants Dexter to suffer but he also has one where he talks about toys and gets interrupted by a prostitute to give him a blowjob! I have not been this confused by a computer video in Dexter since this from season five.

Louis comes in of course and since this is probably the only time Dex can get out of the house, he decides to push Louis against the wall and scare the crap out of him. It turns out he sent him the hand because Dexter hated his game. Oh go cry me a river. He tells Louis he never wants to see him again and Louis agrees but then again I would too if Michael C. Hall was screaming in to my face.

Back at the crime scene Deb asks where he was but Dexter reassures her that he didn’t kill anyone so she doesn’t need to worry. Hey Dexter word of advice to not get caught you and Deb need to tone it all down. Between talking here and at the station about your serial killer addiction it may raise some red flags. Then again you are at Miami Metro so…

In “killer of the season” news, they think someone in the brotherhood of the Ukrainian mob tried to send a message to them about killing Viktor. They jump to conclusions and think it was an ex-employee. In a game of role-playing, the head of the organization pretends to hold an exit interview which really just involves getting a screwdriver to the eye. Don’t screw around if you want a better severance package I guess.

After Dexter is shocked to see Louis later that night at his apartment telling him he will see him at work tomorrow. He decides to put a sedative in his sister’s steak (like any good brother would do) and sneak out to send another message to Louis. When Dexter sees the blood from the sedative mark in Louis neck, he begins to feel his dark passenger. However perhaps due to Dr. Deb’s program, he calls her for support. She calls this a victory because unlike what their dad said, he does have control. He does leave Louis on a random park bench to send a message once Deb leaves the guy who just snuck out of the house and almost killed another person.

At the end back at the crime scene, Dexter talks with a convict who is helping the police locate bodies he buried many years ago. Dexter wonders if he grew a conscious but he said it was always there and that he just gave up over time. Dexter wonders if he should just give up too. But before he can decide for sure the convict just jumps in front of a truck. He did not have a conscious and he never changed. He never wanted them to find the bodies. He just wanted a few more days in the sun and some ice cream. Who could really blame him? Who doesn’t like ice cream?

As a slow motion Deb hurries back from the ice cream stand we all have to wonder if she thinks Dexter pushed him to help release his dark passenger from the night before. However we should be able to find out quickly next week in another fast paced episode of a show that has stopped fooling around and created some real life stakes for our serial killing friend.