Survivor: Cagayan Episode 1&2 Recap - How Do You Solve A Problem Like J'Tia?

Survivor players come in all shapes in sizes, and rarely can you predict on Day 1 who will be left standing on Day 39. Not only is there a social game to be played, there’s a television show going on, with twists and turns designed to keep audiences tuned in and contestants doing stupid things.

That being said, if you said J’Tia would survive through those TWO Tribal Councils, on a tribe of people whose collective IQ is 130, I’d laugh in your face. J’Tia was responsible for the awful shelter. J’Tia was the reason the tribes lost not one but TWO Immunity challenges. J’Tia is the reason Luzon is going riceless for the foreseeable future.

Dividing the three tribes into Brain / Brawn / Beauty was an inspired decision by production. Whenever Survivor can “settle a question” like men vs. women, fan vs. favorite, hero vs. villain, or white vs. black vs. asian vs. Hispanic, the results are usually Survivor gold. (Or at least they are the first time; for every Amazon and Micronesia, there’s a One World and Caramoan.)

The Brawn tribe is aggressive, both in challenges and in camp. Sarah literally interrogates Tony, a fellow police officer posing as a construction worker, while Lindsay (a Flicka Flame / Courtney Marit hybrid) and Trish (Sherri 2.0?) get in a fight over… what, exactly? Trish just antagonizes Lindsay? Between that and the intro shot/accompanying sound effect of Trish getting whacked by a branch, Trish is an early contender for a Final Tribal zero-vote getter.

SURVIVOR PRO TIP #1: Be yourself. Tony lying about his profession will do him no favors, mostly because he’s going to get so unbelievably bored over 39 days (or however long he survives, probably far fewer) that the truth will force its way out. Cliff was honest about his past and subsequently earned a cult-like following, the likes of which we haven’t seen since Boston Rob. Tony got off on the wrong foot with Sarah, and after injuring his other in the challenge, he’ll soon be left without a leg to stand on. (Yay for pedal/crural puns!)

The Beauty tribe is full of solipsistic, silicon-stuffed, surprisingly strategic … Survivors. Brice has emerged as our narrator, eloquently sizing up his fellow contestants with flair. After pouncing on Morgan (does she resemble a Kardashian to anyone else?), the only other outcast in the tribe, he set his sights on Jeremiah, noting, “country folk have to stick together.” In fact, three of our most beautimous contestants -- Brice, Jeremiah and Jefra – hail from Southern states. This is CBS subliminally pandering to their large Southern audience by calling them the most attractive in the country! You can’t fool me, Moonves!

It’s also the only tribe where the hidden immunity idol went unfound. Apparently this season will feature four idols: one at each original camp and one, available post-merge, which can be used after the votes are read like the Deitz/Kwon idols of yore. Yes, there are too many idols. No, I don’t need to explain why. But I will explain…

SURVIVOR PRO TIP #2: Idol > Food. As hazardous as Hidden Immunity Idols are to the game’s theory, never, ever pass up the opportunity to get your hands on one. From a game standpoint, it gives you an extra buffer of protection – especially if you can find it before your tribemates arrive, as Garrett did. From a production standpoint, having an idol forces you into the Survivor narrative. Will you play it? Will you give it up? Will you be blindsided? It may put a target on your back, but it’ll plant you deeper in the audience’s consciousness, which only increased your chances at Fan Favorite and All-Stars perks.

Garrett chose the idol over food. He found said idol. He deflected idol panic onto David. He beasted in those challenges. And yet, ironically, he left the game without an idol to his name, kicked from a tribe with 0 bags of rice.

Just about everything. David made the first mistake in alienating Garrett at the (Tocantins-reminiscent) insta-faux-vote. While Sarah’s vote for Trish and LJ’s vote for Morgan made common sense, David expelled Garrett, the physically fit pro poker player, leaving him on a tribe with three not particularly athletic young women and a twentysomething chess wizard.

David voted as such because he was focused on the last 2/3 of the game, at which point physical players become threats. For the life of me, I can’t process how this is a good move for David. To get to those last 2/3 of the game, you must make it through the opening 1/3. He weakens his tribe by eliminating a tall, buff guy, who is an asset in winning physical challenges, which your tribe will face early and often.

SURVIVOR PRO TIP #3: It’s a marathon, not a sprint. Survivor is a test of your endurance, not just of the elements, or of each other, but of yourself. David has nobody to blame for his dumb move alienating Garrett than himself. Garrett expressed extreme boredom that led to over-strategization and paranoia (the Colton effect). Tasha lashed out when stifled, rather than biding her time. J’Tia nearly pushed Kass past the breaking point when she dumped all the rice in the fire. Even Spencer (whom reminds me of myself, and I’m pissed his inclusion drastically limits the chances I’ll ever get on) was quick to call out his ally Garrett’s flakiness at Tribal. Kass has proven to be the most calm, cool and collected of the bunch, not even letting J’Tia’s rash decisions sway her inner compass.

Whether that compass is aligned correctly is another story. Kass avenged fallen friend David and blindsided Garrett, leaving her on a tribe with tight allies Tasha and J’Tia and Spencer, adrift. This isn’t a great position for her, given J’Tia’s observable challenge/camp/social prowess.

Would the alternative have been better? Well, yes, a bit. A strong Garrett/Spencer/Kass alliance had Tasha as a buffer should Luzon lose yet another Immunity challenge. If the three managed to make the latter two-thirds of the game, Garrett would receive the target David had predicted. If they managed to make the finals, could you imagine Garrett pleading his case to a jury? He could barely keep his thoughts straight at a regular Tribal. She’d destroy him in jury votes.

But J’Tia survives, against all odds. She’s the kind of person who, in a regular, 8 vs. 8 season, probably would have been voted out. She’s your average Survivor pawn, and a group of average players would strike her down early for a minimal advantage. On a tribe of chess champions targeting bishops, knights, and castles, she floats by. If that carries her to the last 2/3, those Beautys/Brawnys better watch out. When the pawn finally inches all the way across the board, it can become as powerful as a Queen.

-Welcome, new readers! I haven't covered Survivor since Philippines but am excited to follow this cast through what seems to be a wild season. I use "I" a lot, which is totally not kosher for television criticism, but Survivor is so much more than TV. I may not offer professionalism, but I've got pretensions, obscure references to past seasons (which I'll try to limit within parentheses, like these!) and "Pro-tips", or things I'd advise future contestants to do, having spent the last 14ish years of my life watching this silliness.

-I don't like explaining challenges. Jeff spends enough time doing that in the episode. I'll talk about strategy, usually latching onto an episode's integral character and judging his/her decisions, based on theoretical alternative options and past outcomes.

-Grading these episodes feels wrong for some reason, so I'm going to stop.

-Overall, I'm psyched for season 28. So many fresh characters! So many questionable choices!

-Has a three-tribe breakdown ever been successful? It's still early, I guess, but Saboga in All-Stars and Matsing in Philippines both royally sucked pre-merge a la Luzon.

-Speaking of Luzon, I don't know the other tribe names yet and refuse to look them up. I think one was Solana, which is too close to One World's Salani tribe for me to sleep soundly tonight.

-Fallen Comrades: David needed to get out of his head and spend some time on the island with his fellow castaways. And THAT's why you don't wear a blazer on Survivor! Garrett studied past episodes for hundreds of hours, a level of dedication I must commend. But dude, didn't you see my Pro Tips??

-Episode(s) MVP: Sarah, for her quick read of Tony and challenge dominance.

OK, fine. I’m torn between Kass and Sarah. Kass reminds me of Denise Stapley, who won Philippines despite (or because of) attending every tribal council. Kass is analytical yet willing to make big moves. We saw David's blindside through her eyes. Garrett's blindside could have been framed as a massive blunder for Kass, but we got some rationalization. This couldn't have been a game-ending move, at least not yet. Sarah got her “I should be on [the Brains] tribe!” quote CC’d, a sign she’s a triple-threat. I’ll leave them at neck and neck until next week.

-As always, hit up the comments with your thoughts, theories and strategic insight. For more TV musings, follow me on Twitter at @miketvladue.
Posted by Dual Redundancy at 9:59 PM No comments: 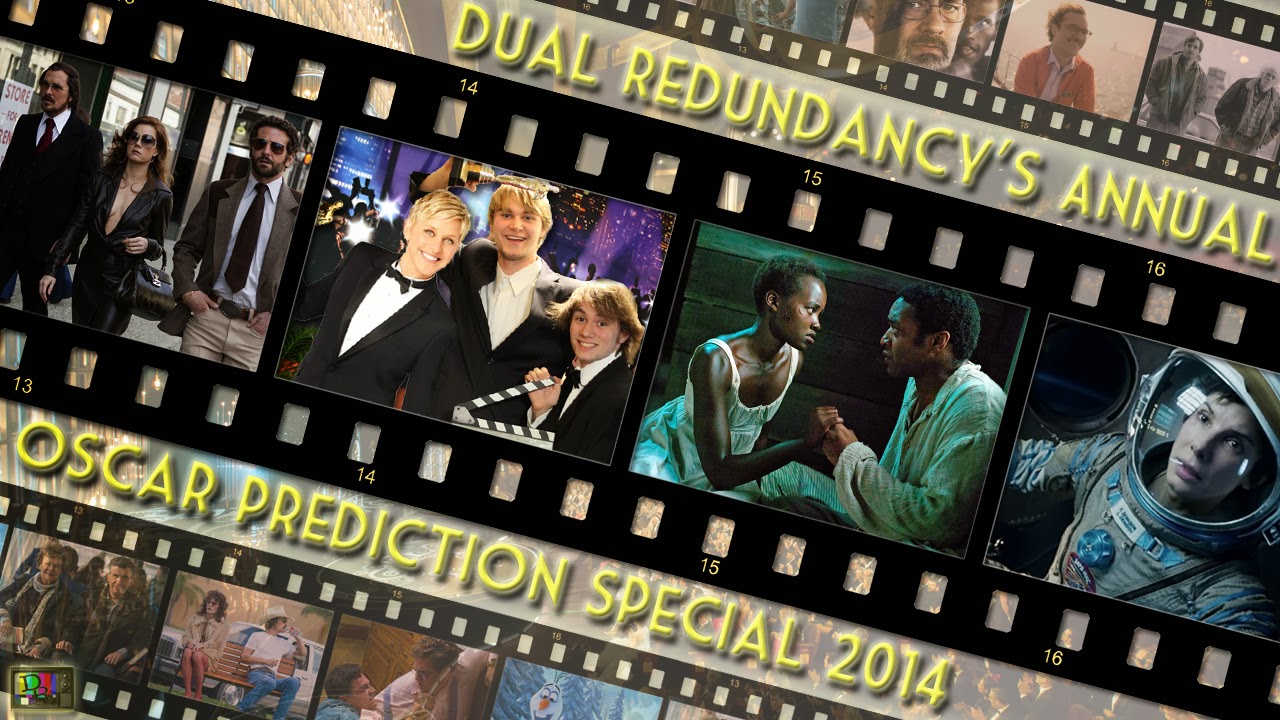 Every year David and Mike try to predict the very unpredictable Oscars in a very special episode of Dual Redundancy. This year they try and forecast who will take home the Oscar in all the major categories for the 86th Academy Awards.

The 86th Academy Awards are on Sunday, March 2nd on ABC and will be hosted by Ellen DeGeneres.

You can also listen to past episodes of the podcast on iTunes or on our YouTube channel.

As an added bonus be sure to print out your very own Oscar ballot which includes our predictions. This way you can keep track of your picks and have an easy guide to follow along during the show. As for why we chose what we did, listen to the above podcast for all the details. 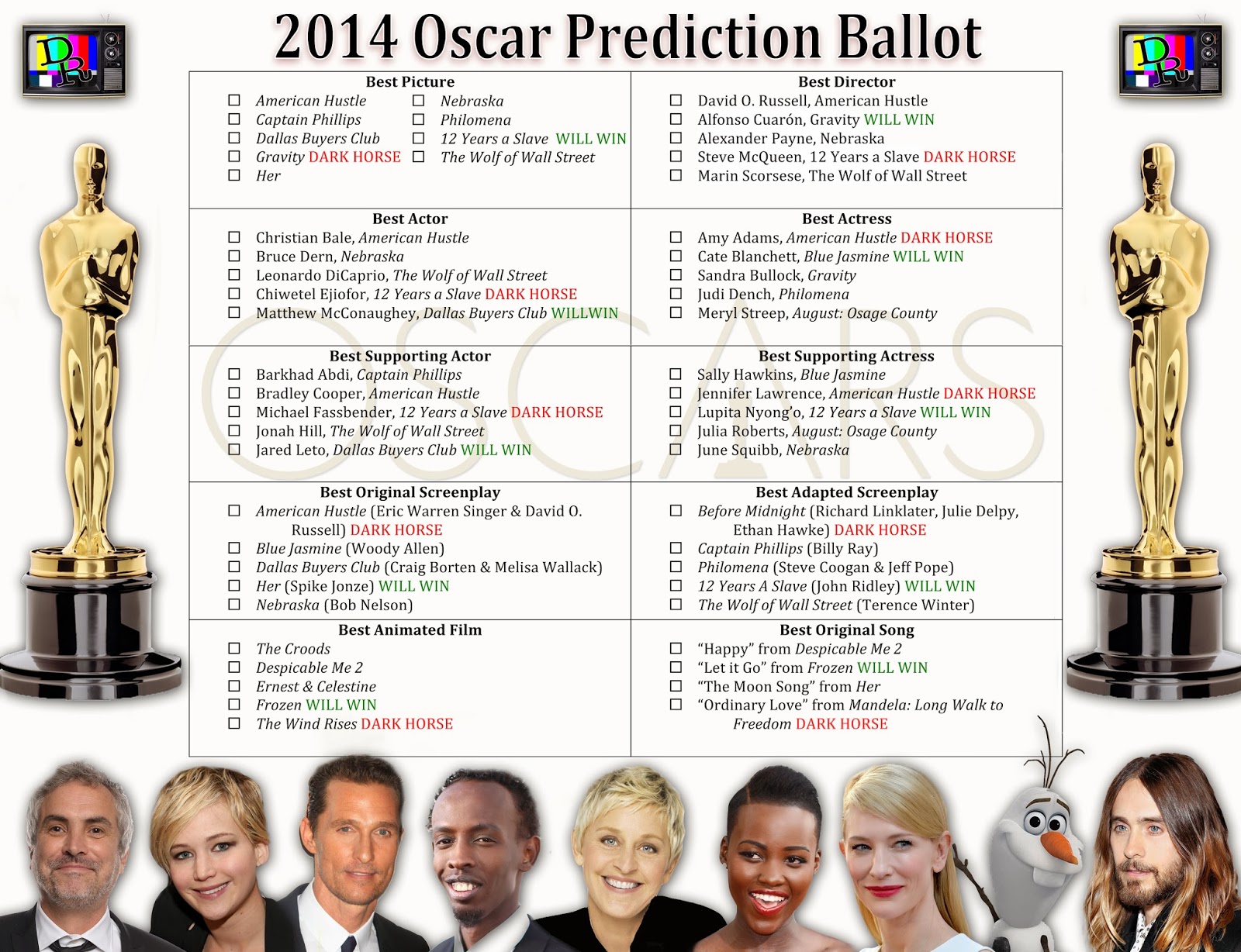 Posted by Dual Redundancy at 6:41 PM No comments: 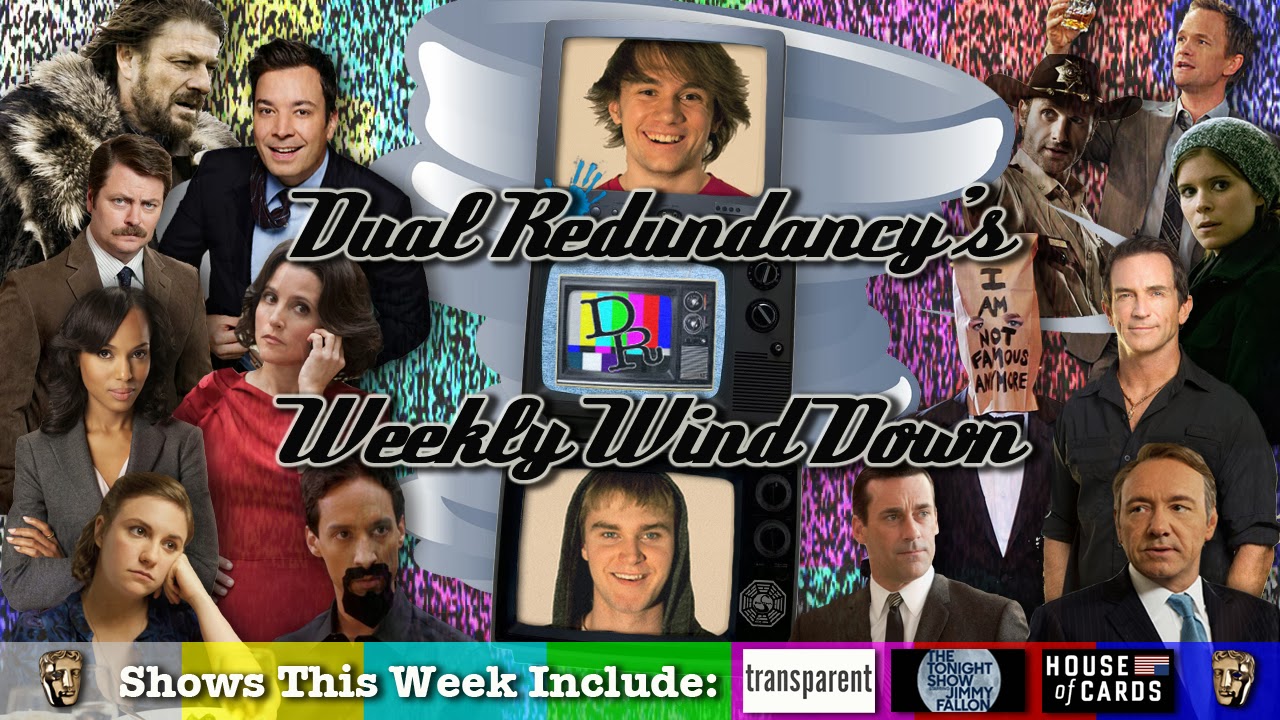 You're busy. We get it. Not everyone can spend hours all day monitoring and watching everything in television and entertainment news. That is why Mike and Dave are here to do it all for you. At the end of every week we will wind down all the important things you may have missed in a week full of entertainment.

In this week's episode we recap the 2014 BAFTA Awards (2:03) and Shia LaBeouf's strange behavior and art exhibit (9:12). We also look at the future projects from the cast and crew of How I Met Your Mother including Greta Gerwig being cast in How I Met Your Dad (15:45). Finally, we wind down Amazon's "Pilot" for Transparent (25:22), the premiere episode of The Tonight Show Starring Jimmy Fallon (37:05) and the first few chapters of House of Cards season two (49:00).

You can also listen to past episodes of the podcast on iTunes or on our YouTube channel.
Posted by Dual Redundancy at 8:49 PM No comments: 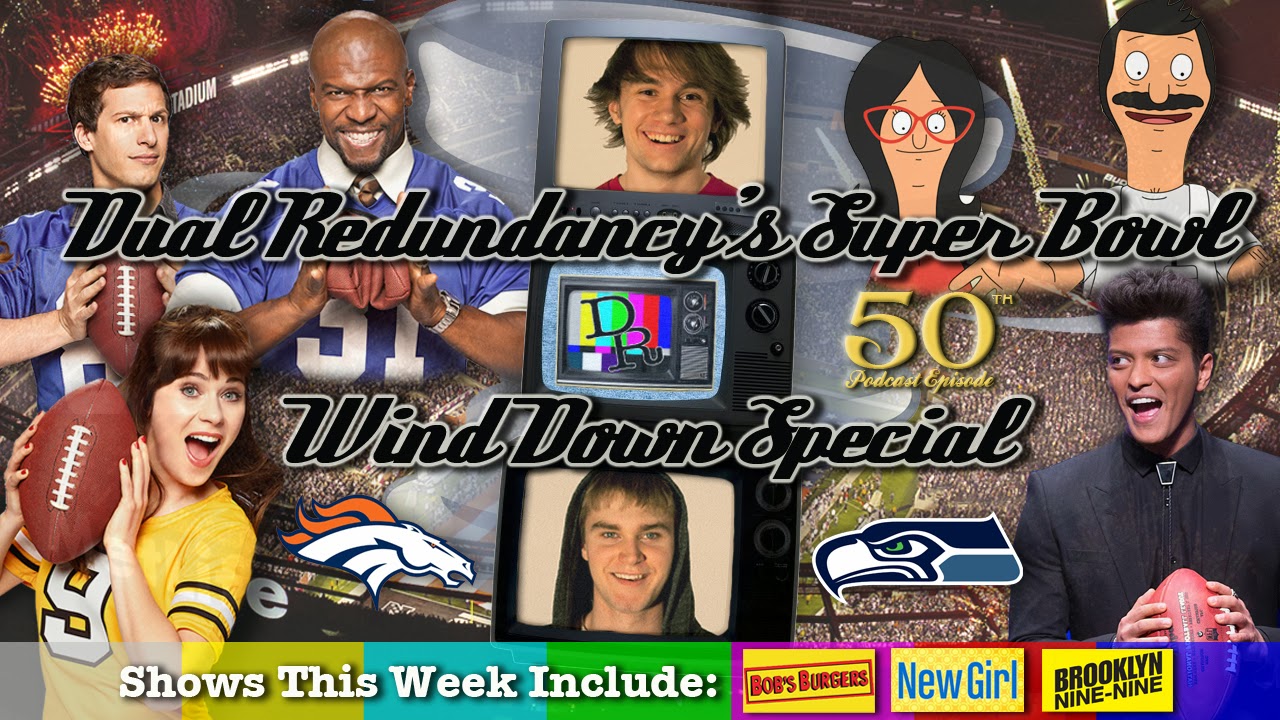 You're busy. We get it. Not everyone can spend hours all day monitoring and watching everything in television and entertainment news. That is why Mike and Dave are here to do it all for you. At the end of every week we will wind down all the important things you may have missed in a week full of entertainment.

You can also listen to past episodes of the podcast on iTunes or on our YouTube channel.
Posted by Dual Redundancy at 10:57 PM No comments: