Podcast Episode 26: And The Next Oscar Goes To...

In their annual Oscar special, David and Mike give their predictions for the 85th Annual Academy Awards in all the major categories including acting, screenplay, director, and picture.

Posted by Dual Redundancy at 10:42 AM No comments: 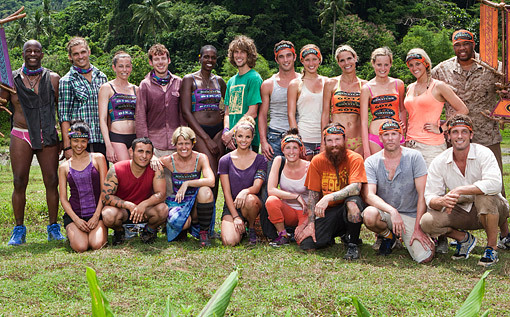 ML- I understand Survivor revisiting one of its strongest twists, the "Fans vs. Favorites" conceit that back in 2008 led to arguably the best season the show ever had. What I don't understand is how production managed to cast so few players that fit into either one of those classifications.

Let's look at the "Favorites" first. Last FvF we were treated to actual fan favorites Cirie, Ozzy, Yau-Man & James, love-to-hate villains Fairplay, Ami & Penner, as well as eye-candy in the form of Parvati, Amanda and Eliza. For the most part these were people who just missed out on the million dollars -- Ozzy and Amanda both made Final Tribal Council, with Yau-Man and Fairplay one spot away and Cirie & Eliza two spots away.

This time only one contestant made the FTC in his previous appearance: Phillip Sheppard of Redemption Island. Malcolm was one spot away and Erik three, but for the most part these are low-ranking contestants in all metrics, specifically game placement.

Put another way: The average placement of the original 10 Favorites was 4.5. With the addition of Francesca, this season had an average of 7.4, and without her still only a 6.22.

Judging by how the episode went down, its clear CBS took great care in crafting this cast. The favorites are a mess of a tribe, chock-filled with the anxious (Cochran, Erik), the proud (Francesca, Brenda) and the borderline-psychotic (Phillip, Brandon, Corinne). Malcolm, Andrea and Dawn seem like the most well-adjusted, adept Survivor players, and I think our winner may come from that triad.

The best part of the overlong 90-minute premiere was the pre-tribal council scramble. The target flipped from Phillip to Fran to Andrea within minutes, allowing us to see this least-composed tribe ever deal with the first (and probably easiest) vote of the season.

Phillip actually impressed me off the bat, implementing the things he learned and witnesses first-hand from Boston Rob back in Nicaragua into a code from which to base his gameplay on. The BR Code, as he called it, went as follows:

This has absolutely worked for Rob in the past. In All-Stars, Rob and Amber were the core of their Chapera alliance and sacrificed Alicia, Big Tom, Rupert and Jenna all in their pursuit for the final 2. In Redemption Island, Rob maintained his strong alliance as long as possible and carried the two weakest competitors to the finale, where he won soundly.

That being said, Phillip is no Rob. He doesn't have the charm or ingenuity Rob displayed in all four of his seasons. When he proposed a four-person alliance of himself, Andrea, Corinne and Malcolm, I thought it was a smart move. When he branched out to Cochran, Dawn and Erik, however, it was clear Phillip was in way over his head. Erik didn't even believe him, and Erik still carries the heavy crown awarded to "dumbest player ever". We got a lot of Phillip this week, but it was to set up his epic rematch with Francesca and establish the flaw in his character from the onset.

Poor Francesca. I hope that rock went down smooth. Her fatal flaw was playing too hard from the onset, as well as being in the same tribe as Phillip. Put yourself in, say, Cochran's shoes: Do you side with the crazy Specialist who isn't going to garner many jury votes and will always be a bigger target than you, or the intellectual, well-spoken Francesca stirring up trouble? I hope Francesca holds no grudges against the tribemates who voted against her, because I think they were just making the right move at the right time. Easier said than done, though.

So does that make Francesca the worst player of all-time, seeing as she was voted of 1st twice now? If you're in the camp that declares Sandra the best player for winning twice, yes, it fits your definition. I don't think she's necessarily the worst; at least she went down swinging both times, unlike quitters such as Purple Kelly, Janu, Osten, Kathy and Na'Onka. She also made it to Day 3 twice, unlike Wanda and Jonathan of Palau and Kourtney, who was medivacced during the first challenge in One World. Let's not kid ourselves: Francesca is not a great player, and I doubt she was nor will she ever be anyone's "favorite." But she's not the worst, despite what statistics may say.

Onto the "Fans"... judging by the cast biographies and pre-show interviews I've read, few of these people seem to be actual superfans of Survivor. I find it hard to believe female fans of the show look like the four hot blondes or the buff tools bouncing around the island. Matt, maybe. Michael? Ok, sure. Reynold? No way.

Fan or not, Reynold already carved himself into a nice alliance of four along with "not the prettiest" Allie and the "hottest" of the island Eddie and Hope. These cool kids splash in the water and flirt with their hormones all a-flutter, not giving a rat's ass about the majority of the camp glaring at them from the beach.

This is a huge flashback to, again, FvF 1, where Parvati/Amanda/James/Ozzy shacked up and Penner/Ami/Eliza/Yau-Man tried turning the tide against them. Here, Sherri and Julia have both been shown ready to take down the PYTs, with Michael in the middle as a possible Fairplay, positioned to join whichever side benefits him and his buddy Matt. With so much complexity going to the fans this early, might one of them rise up and outlast a favorite?

I doubt it. The fan we got the most footage of was Shamar, whose larger-than-life personality came off as pretty negative, even though he did help get the fire going. Mostly, he sat back while work was getting done and bickered over fire vs. shelter. News flash, Shamar: On Survivor you need fire AND shelter AND water AND an alliance. Better work on that last one or else you won't be around to enjoy any of the other three.

While not as confident as last year with Denise, I think I'm ready to make a winner pick for Caramoan: Dawn Meehan. While she didn't get a lot of visibility on her own, she received a pretty glowing review from Cochran, who is one of the best narrators on the Favorites tribe, next to Malcolm. Cochran noted how she was willing to work with him despite their South Pacific history and that her newly-harnessed cut-throat personality represented "A New Dawn." That right there, to me, is the stuff winners are made of on this show.

Can the Favorites get their mojo back and win against the Fans? Don't forget, Favorites lost the first Immunity back in Micronesia but went on to dominate post-swap. With so many unpredictable "favorites" and unseasoned "fans", this is sure to go down as one of the messiest seasons in Survivor history. As fans of reality TV know, messy = gold.

Want to chat with me about Survivor? Speak up in the comments or follow me on Twitter @miketvladue for live-tweets from this show and thoughts on most everything else pop-culture. Thanks for reading!
Posted by Dual Redundancy at 3:04 PM No comments:


In this week's episode we catch you up on the world of pop culture. We also discuss the Up All Night fiasco, Community's return to TV, and the latest in pilot casting news. We also wrap up the 55th Grammy Awards and recap the Survivor: Caramoan - Fans vs Favorites premiere. Finally, we also break up with the TV show Revenge in "It's Not You, It's Revenge."

Posted by Dual Redundancy at 9:14 AM No comments: