Podcast Episode 110: The Premieres of Blindspot, The Muppets and Survivor Second Chance and the Finale of Big Brother 17 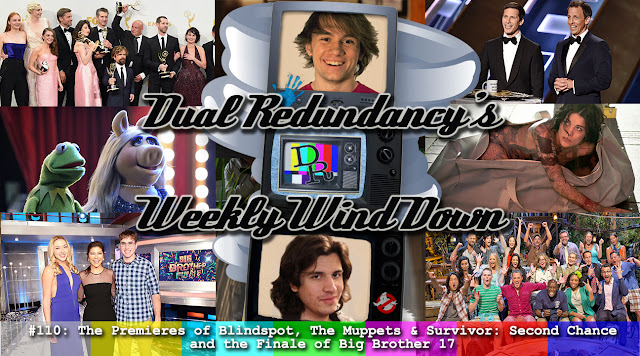 In this week's episode we wind down everything from the 67th Primetime Emmy Awards including who the winners are and how host Andy Samberg did (1:55). We also review the premieres of NBC's Blindspot (15:20) and ABC's The Muppets (27:50). Finally, we look at the finale of Big Brother 17 (37:35) and the premiere of Survivor: Second Chance (46:45).

You can also listen to past episodes of the podcast on iTunes or on our YouTube channel.
Posted by Dual Redundancy at 9:29 AM No comments: 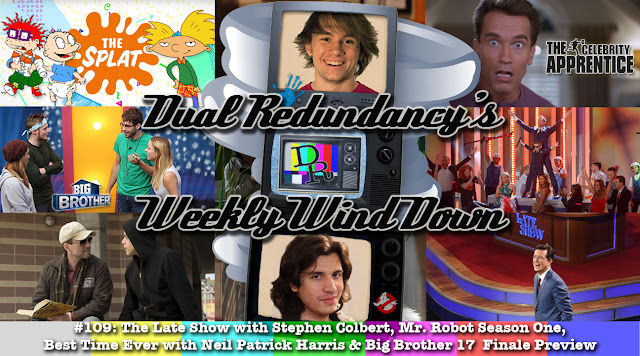 In this week's episode we react to some of the 67th Primetime Creative Arts Emmy winners (2:00), Nickelodeon’s upcoming Splat programming block and possible revivals (8:10), and to Arnold Schwarzenegger being named the new Celebrity Apprentice host (16:00). Next, we prepare for and preview the Big Brother 17 finale (20:00). We also review the premiere week of The Late Show with Stephen Colbert (29:50) and the premiere of Best Time Ever with Neil Patrick Harris (40:50). Finally, we give a spoiler-free look to Mr. Robot season one (49:50).

You can also listen to past episodes of the podcast on iTunes or on our YouTube channel.
Posted by Dual Redundancy at 5:53 AM No comments: 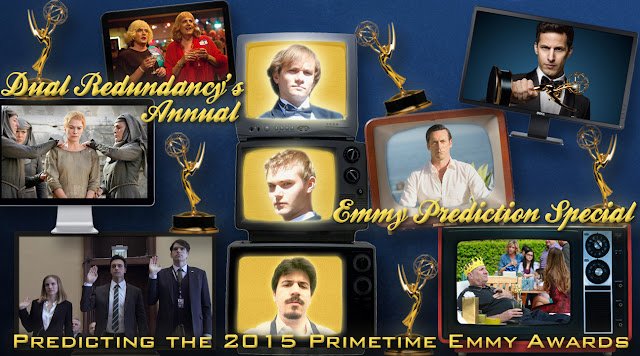 Every year we try to predict the very unpredictable Emmys in a very special episode of Dual Redundancy. This year Dave, Mike and John try and forecast who will take home the Emmy in all the major categories for the 67th Primetime Emmy Awards. The ceremony will be on Sunday, September 20th on FOX and will be hosted by Andy Samberg.

You can also listen to past episodes of the podcast on iTunes or on our YouTube channel. This includes coverage of many of the Emmy nominated shows plus an Emmy nomination reaction podcast. As an added bonus be sure to print out your very own Emmy ballot where you can keep track of our predictions and have an easy guide to follow along during the show! 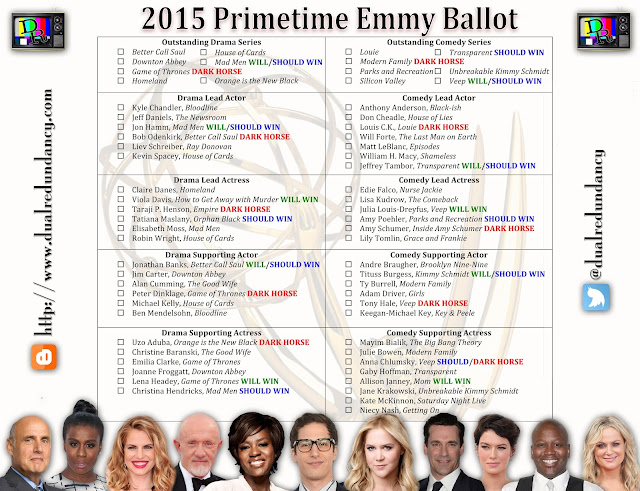 Posted by Dual Redundancy at 5:53 PM No comments: