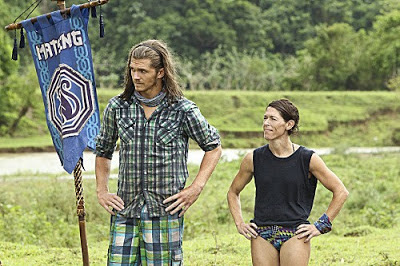 ML- The Matsing tribe is no more! Malcolm and Denise were randomly absorbed into Tandang and Kalabal, respectively, but not before Malcolm discovered the Hidden Immunity Idol on the Matsing beach. He and the Tandangs cruised to victory while Kalabal struggled in the challenge due to Katie's ineffectiveness. In the end, it was dirty girl Dawson who got sent packing from the dwindling girl alliance. She may have given Jeff Probst a hug and a kiss, but she went out without ever revealing the dirt on Jeff Kent.

The MVP of the episode was definitely Malcolm, who found the idol as well as acceptance on his new tribe from everyone, including poor bullied RC and naive Pete, who divulged his own idol to Malcolm. He's in a great place and is a major threat to go deep into the end, and could ride his wave of favorability to a win.

The LVP, if thats a thing, belongs to Dana. Having never been on the island playing Survivor, its easy for me to say there would be no conditions that could take me out of the game. However, her severe pains and chills weren't alleviated in the pounding rain, and the tiny country tomboy opted out of continuing, even though the doctors gave her a go-ahead. Not only did she screw over herself, she ruined things for Katie and Dawson on Kalabal. If the red tribe loses again, Katie is in some hot water.

That's all for this week. Kalabal is so divided that it made for a less-than-interesting Tribal. I'm hoping Tandang heads to TV soon so the Abi-RC battle thats been brewing can come to a head.