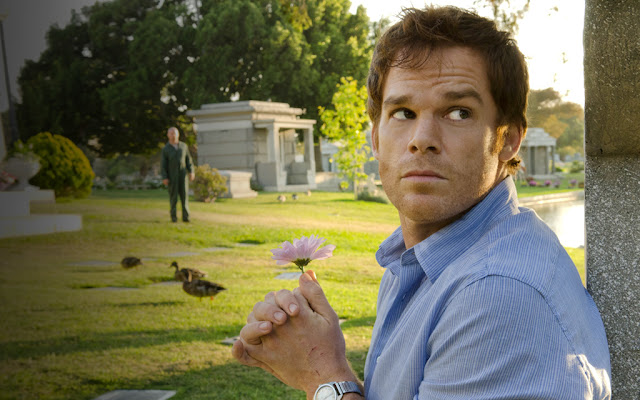 DA- Dexter came back full of built up rage and excitement with another action-packed episode.

After dream sequence after dream sequence of Dexter losing his dark passenger, he finally lashes out on a criminal in Miami Metro. While I knew Masuka was never going to bite the dust it would have been interesting to see what lie Dexter could come up with it to cover that up!

Dexter’s next target is a cemetery groundskeeper named Raymond Speltzer. Deb of course follows him at every moment to try and stop him. Since he knows he is being followed, Dexter lures Deb to the bar to let her be a part of his stalking process with this kill. Deb tells him to let the legal system take care of this but Dexter zings back that if the legal system worked he wouldn’t be this busy. Oh Dexter you got her!

The destruction of Louis Greene came to a quick and sad ending for me. First Masuka fires him when Dexter mysteriously sends the missing hand back to him for “not being mint.” Next came Jamie. Dexter sets up a video for her to find that involves him with a hooker. Louis tries to pull a Dexter with a crazy lie (it’s not cheating if you pay for it). Louis turns then turns the lie to Dexter (which is actually the truth) but this is absurd to her. Dexter would never do such a thing! What’s next Louis? Are you going to try and tell her that he kills people?! Yeah right!

Somehow the GPS on the bracelet that Viktor had only marked three places (the three of which Dexter was with him for). They trace it to the marina and to the exact boat (don’t ask me how) where they see Louis trying to sink Dexter’s boat. Since he thinks it is security he says it is his boat. After the classic misunderstanding is settled and they learn about Dexter, Louis is shot. Wow! While I was excited for this increased action I was sad to see this character go especially since the show was leading him to be so much more.

After being turned down for a search warrant on Raymond Speltzer, Deb tries to look into Raymond herself. It turns out that Raymond likes to create Saw-like mazes where he chases his victim in a gimp-like costume while wearing a Viking hat (to each his own!) Deb breaks in and begins to be chased herself. Dexter saves the day but unfortunately did not arrive fast enough to save the dead girl.

Will this be the final straw and will Deb give in to Dexter’s unique justice system (since the real system is certainly flawed in this case)? Perhaps we will find out next week in another exciting and fast-paced Dexter.