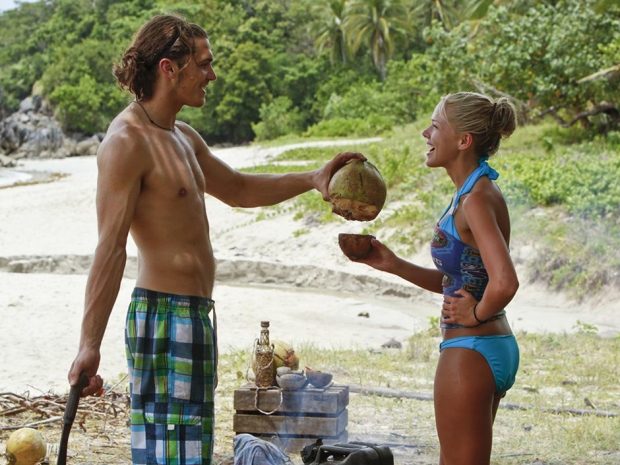 ML- Big props to Malcolm this week, who was able to put the good of the tribe as a whole (and himself in the long run) ahead of his sexual desires and boot out Angie. It was no surprise to the audience watching that Angie was going, especially after her opening confessional where she boasted "each and every one of my tribe mates trusts me and I trust them". Yeah, okay. If I ever went on Survivor, I'd be in a Jamie Newton-level constant state of paranoia, never telling the camera I was confident about anything so they could never use it against me in the edit.

Pete emerged as a threat tonight as he formed a tentative alliance between himself, Abi-Maria, Artis and Lisa, alienating RC and his eventual threat, Skupin. Abi-Maria is in the best place of everyone on that tribe, having positioned herself into 2 alliances and holding the Hidden Immunity Idol she found about thanks to RC's clue. Unfortunately for her, she's in a Natalie Bolton-level constant state of batshit craziness. I don't see her or Peter, who now reminds me of Gregg Carey in Palau, taking this all the way to the end.

On Kalabal, Penner was still on the outs. I have to praise him for managing to say the phrase My Ass!, though, while mentioning how his aforementioned body part was hurting from the shelter. When Jeff and Dana noticed the bull emblem was gone, they alerted the tribe that he probably had a hidden immunity idol. Jeff was respectful, not angry, noting how Penner as a returning player was playing smarter than everyone else.

When Penner later approached Jeff, it was a good move for the veteran to try and gain favor, but unfortunately his new "alliance" didn't feel the same way. A four-fingered shake, as it seems, is not a real binding handshake because men need to use all 5 fingers to shake for real. The logistics behind this baffle me and I can only come to the conclusion that Jeff is an idiot.

Matsing continued their bad-luck streak by losing their boat, as well as the Immunity challenge and accompanying rewards. Momentum is probably the most important factor in Survivor, as it affects morale and contestants' mindsets in unbelievable ways. Matsing is in deep trouble, even without Angie to keep the average IQ down.

It's hard to pick a favorite to win in the game right now. Statistically, it doesn't make sense to put money on any of the Matsing members. Kalabal just isn't getting the screentime or story lines they need to signify a late-game surge. Tandang gets a lot of strategy, so the best winner bet probably comes from here. Is it Pete? Skupin? RC? Abi? Lisa? Definitely not Artis.

My money is still on Denise, despite the odds. She kept Malcolm in line, dominated the challenge and keeps me interested in her as a player despite her negative attractiveness. She needs to stop mentioning her practice and the money she makes back home, however, or else people will never give her the vote based on lack of need.