TV Review: Parenthood 4x03: Everything is Not Okay 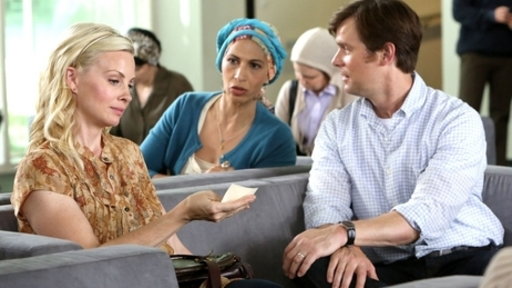 ML- Parenthood has a way of taking the characters I can't stand and really humanizing them. I didn't like Crosby, but knocking him down a few pegs made me root for him again. I didn't like Julia, but her fiasco with the adoption (and subsequent crying scenes) made her one of my favorite Bravermen. Now Kristina, who has always been perfect for an off-hand random comment but nearly unbearable in her persistent nagging, is now front and center in a vulnerable, Emmy-worthy story arc for Monica Potter.

As she and Adam wait two long hours for an appointment with the oncologist, a Stage 2B patient named Gwen Chambers approaches and pitches herself as a friend and mentor in this tough time. The scene between Kristina and Gwen was fantastic and real; they don't really know each other, but in a way, Gwen knows Kristina better than anyone else. Gwen advises Kristina to stay with the doctor that seemed to be dismissive and distant because he's actually making himself available to every patient he has. This isn't what Adam wants, but Gwen instills in Kristina a newfound confidence and a voice that prevents her from being a victim and starts her on a path to survival.

Adam handled the news about as any of us would expect -- displacing his frustrations and fears onto Amber's burnt coffee and scheduling conflicts at work. While the show does a great job of humanizing characters, it also allows them to be annoying, irrational and just plain unlikable sometimes, when the story needs it. His later confession to Amber that Kristina is "sick" was honest, and his reaction to Kristina's cry for a husband that can let her feel scared without drowning her in pleasantness shows what a well-rounded actor Krause is. It's hard to imagine sometimes he went from the Nate/Brenda relationship on Six Feet Under to this one, but you have to marvel at the transition.

Not every character has increased their place in my heart after this week. Hank is obviously the guy Sarah is going to end up with, at least for awhile, and that pisses me off. The past few seasons have really painted her and Mark into an unlikely but functioning pair that are different but still make it work. Yet tonight, when she couldn't rant about Hank's ego preventing him from taking a wedding gig, there was nothing else for them to talk about. Yes, couples evolve into stagnation and her underlying feelings for Hank are attributing to her distance already, but I feel cheated to suddenly see Mark get pushed out of the way after all the progress made in their relationship.

Max also is a tough character to swallow, for understandable reasons. His obsession with the Skittles in the vending machine and how it alienated even his best friend shows the extent of his condition, and the decision to channel that energy into a run for Student Council President was an obvious but welcome one. It's an election year, so expect a rise in campaign-themed plots on different shows. Here, there's the potential for Max to be bullied and ridiculed as he takes the spotlight, but also the chance for a great underdog story if Max wins (which I hope and predict he will, though as the recent Emmys proved, my predicting of winners is often spotty!)

The Zeek plot was pretty anti-climactic but allowed us to actually see Nelson and Bedelia act and gave Crosby an opportunity to spill about the heart medication his father is taking. This is going to come into play later in the season in a big way, methinks.

Next week (I think) is the beginning of Matt Lauria's run on the show! He played Luke Cafferty on the last two seasons of Friday Night Lights and will be playing a war veteran who bonds with Zeek. Yay for all the cross-show love!