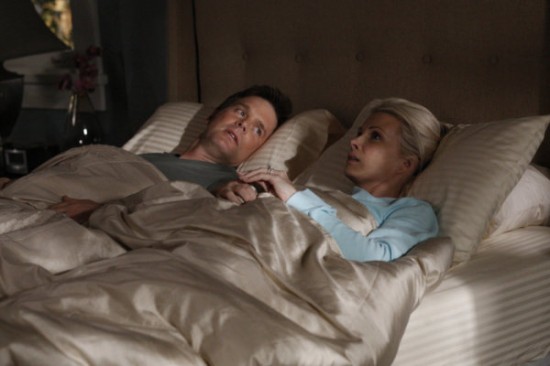 ML- Tonight's episode was called "Left Field", an apt description of the ending, where we found out Kristina has breast cancer in a scene that came out of nowhere. I don't know if the scene was perfectly handled here, as it was so out of left field that it felt out of place in the episode. Of course, one might argue it's not like breast cancer is convenient or pops up at opportune moments. I just wish the show had made it either more surprising (just one scene rather than a few in a row) or devote more time and less to the business of getting a dog.

Kristina wanted a dog to deal with her Empty Nest and fill the void left by Haddie's absence. Adam pointed out the first dog even looked like Haddie. Instead, they settled for a Golden Retriever, Max's newest animal obsession, but the breeders with the desired dog were snobs and, worst of all, pricey. Adam nearly broke down and bought the dog based on their attitude alone, but the $1,200 price tag was worth sleeping on.

By the time they reached a decision, the dog was gone, and Max was furious. He didn't want another dog, he wanted that dog. Adam has to leave because of a meeting, after which Max yells for another 45 minutes. Later, Adam comforts Kristina and decides they should get a dog, and that maybe it will help them from missing Haddie. (How can they miss her when they have cute little Nora there? My favorite part of the episode was her yelling "apple", which Kristina had to angrily correct to Adam mid-fight as a tomato).

It's before they go to buy the dog that Kristina has her mammogram appointment and gets the bad news from the doctor. We don't actually get to hear the bad news; instead we're treated to "Naked As We Came" by Iron & Wine, but the lyric "one of us will die inside these arms" is pretty clear. This will be a major story of the season, and hopefully one that will humanize Kristina the way Julia has been humanized with her baby search.

Julia's story was absolutely my favorite from this week. I can't imagine the struggle of taking in a young child of Victor's age and handling the transition smoothly. That's not to say I wouldn't, but I wouldn't know how to best help the boy, and Julia and Joel are struggling with the same issue. Victor feels sick on the first day of school- do you let him stay home so you can earn his trust, or force him to go to school as they did to Sidney? At first, Julia picks the first and asks Joel to stay home with him. Joel doesn't agree, and notices Victor is probably just faking it to get what he wants- to stay home and play video games.

After two days of staying home, Julia drives him in. He doesn't want to go, and she sees the fear in his eyes. With no regard to all the honking moms, she gets in the backseat with him and promises him it will be okay, and that she'll even stay in the parking lot all day while he is in class. This comforts him, and he goes after a pinky promise.

And Julia waits. When Victor comes out for recess, she is there. As ridiculous as this would be for someone to sit in their car in wild California heat, it shows a side of Julia willing to compromise and go the extra mile for this boy, who she seems to be growing to love. I would feel bad for Sid, but she has been really annoying in the past, so it's nice to see Julia interact with a different kid. I will say, though, that she's handled the addition of Victor with grace thus far.

Julia tells Joel what she did and expects him to think she screwed up by staying, but instead he kisses her. These two started off the show as the fringe couple without a big name star, but they've become one of the real beating hearts in this beautiful family story. When Victor asks her why she did it, Julia says people in their family keep their promises. Victor thanks her, and the seeds of their bond have been planted. I've grown to love Victor more from last week already, so I expect he'll soon join the ranks of Braverman elite.

Speaking of Braverman elite, one of them was forgotten this week: poor, little Jabbar. Crosby and Jasmine served as the foil to Adam and Kristina this week: the latter were planning appointments for everything from doctors to "Funkytown" (sex), while the former kept living spontaneously, having Sunday night floor sex and, much to Jasmine's chagrin, bailing out on nice salmon dinners for pizza. The consequences of Crosby's immature ideology came back to bite him when he forgot it was his day to pick up Jabbar. He and Jasmine stormed to the school, bickering over who was more right, but in the end, seeing Jabbar's disappointed face was all Crosby needed to realize he needed to compromise a little bit. He synced his and Jasmine's calendars (and even included "Funky town"), and she agreed to put up with his childish self for at least one more week.

Lastly we had the inevitable breakup of Drew and Amy. Sarah was unable to comfort him and could only spout her hate at Amy and ask Mark to keep tabs on Drew at school. She tried confiding in Hank, who bragged about his high school conquests and advised Drew to sleep with Amy's best friend as revenge. Sarah, disgusted, left, and didn't expect Hank to actually give Drew some good advice.  I'm still not loving Romano in those role, especially in comparison to Jason Ritter's Mark, but he is doing some good acting work. Plus, he got Drew to get over Amy pretty quickly, so props to him for keeping the Bravermen all happy.

Before I go, I'd like to thank my friend Brett Snyder for actually Photoshopping me into the Braverman photo as I mentioned last week! I'll post it below. 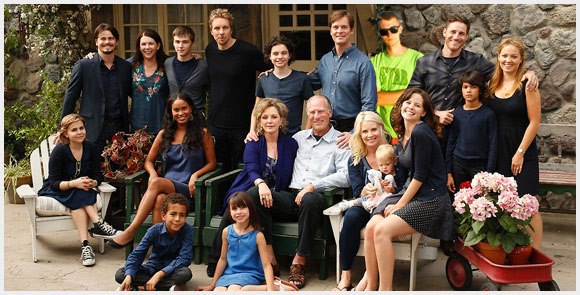