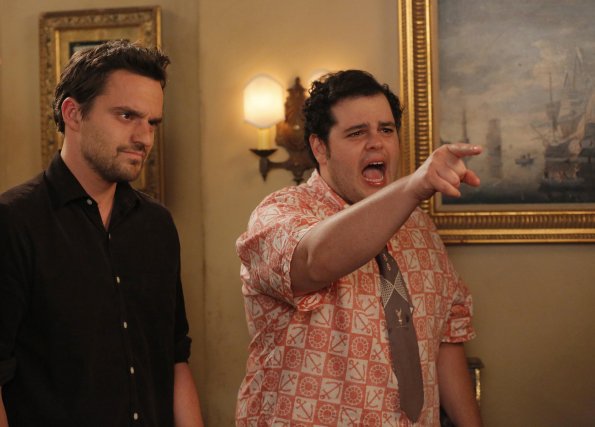 DA- In tonight’s second episode Jess is still free from “boob jail” and her job. She is happily cleaning and painting “abstract” portraits of the guys. In hopes of stopping Jess Nick brings her down to the bar to socialize and drink. Here she meets Andy and Bearclaw, (the latter of which is played by Broadway-star Josh Gad). Like in the episode before, Jess loves to role-play and becomes Katie after a handsome stranger looks for her as his online soul mate at the bar.

While it was easy to pretend to be Ivy this new falsehood creates a string of lies for Jess. Katie is a dancer who does something with puppets. (No really. I am not forgetting the actual term. Jess who is Katie cannot even remember!) This even forces Nick and Schmidt to pretend to be powerful dancers and leapers. (Sorry Nick but I do not think you are ready for So You Think You Can Dance but I heard Dancing with the Stars is calling). However the biggest lie she does tell is probably having seen Creed a painful 42 times (just a few shy of her new boy). Can you even imagine a lie bigger than that?!

However Jess must have forgotten she asked Nick to give her number to Andy moments before. At least she meant Andy but Nick thought she meant Bearclaw. As she texts “Andy” to come over to cook dinner and to see her “meatbar” (an auto-correct fail) she has no idea that Bearclaw is on his way to show her his claws and back tat.

After some awkward emotions and situations Jess lies to save her from hurting Bearclaws’ feelings. She says he is sick and that even Bearclaw’s anal thermometer will not help her. However all of Jess’ men meet when Katie’s handsome stranger arrives and wants to make out with Jess inside the men’s room stall of the bar. Despite all these sitcom shenanigans and situations, the handsome stranger decides to keep spending time with Jess as her and not as Katie. He says he does not “care anything about [her]…or [her] caring about [him].” He just wants to be “torn apart.” She says yes and jumps into his Prince Charming-like arms.

Meanwhile in a side story that does not really finish Winston’s family visits and Schmidt tries to impress Winston’s sister to bring her on a date. Winston’s mom hates it and tries to get him to stop or she will not pay for his cell phone bill. Schmidt then decides to take the sister on in a game of one-on-one basketball with painful results. Back at the bar Nick meets a future version of himself who is really just a drunk patron who knows quite a bit about Nick and his relationship with Jess. He does offer present Nick some important advice and tells him to be ready to apologize to Jess over something bad he is going to do to her. What will this be and when did this show become How I Met Your Mother? We have the flashbacks but we need some flash-forwards now for the complete transformation. As long as we do not get a flash sideways I’ll be yelling with Jack that we have to go back – to New Girl each and every week.