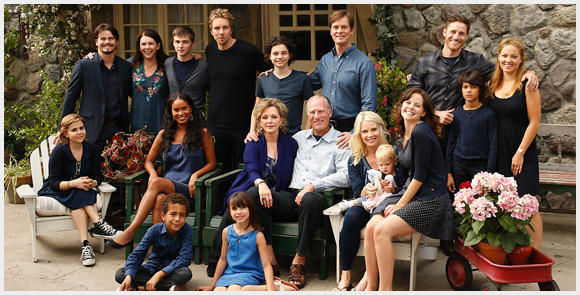 ML- Look at that photo above. Don't you just want to photoshop yourself into that family? There's room between Adam and Joel for an extra Braverman, or maybe in front of Jabbar and Sydney if you lie on your side. If it were me, I'd sneak peek out through the window and make a funny face. And everyone would laugh and say "Classic Mike Braverman"/"Get out here Mike"/"Max stop doing that"/"Victor, try to smile, honey", all at the same time.

Alas, not all of us can be Bravermen, and, as it turns out, not all Bravermen are guaranteed access into the family portrait. Mark found out the hard way that engagements, especially those without rings, don't seal the photo deal. It takes a little one-on-one with Camille to gain V.I.P. access.

There may be trouble in paradise for Mark (who appears to have gained some weight, but we will let it slide because he was nominated for a freaking Emmy award!) and Sarah (still Emmyless after all these years) in the form of photographer Hank, played by Ray Romano (has more Emmys than any one man deserves, unless that man is Kyle Chandler). Obviously, Sarah is an gold-digger hunting men with Emmys.

But seriously, she proved to be a downright terrible assistant, her only redeeming quality being her rapport with the client. Hank finds it hard to hide his dismay, but doesn't fire her right away because he needs her help loading the truck. That's what you get for lying at job applications!

Speaking of lying, let's transition to Amber and her storyline. Apparently, she and her politician beau hit a rocky patch, since she was quick to fall into bed with American Idol's Paul MacDonald, which makes perfect sense: first NBC "introduces" Katharine McPhee to us through Smash (and also Community), then Clay Aiken on Celebrity Apprentice, now they bring us MacDonald on Parenthood. Who will be next? I nominate Danny Gokey to be a convicted serial killer who gets a 43-minute execution scene on Law & Order: SVU.

Amber was crushed when she found out a celebrity didn't live up to her expectations (he was receiving complimentary muffins from some other girl for the past six months), but it was Adam who let loose, kicking Paul's mediocre hipster band out of the Luncheonette. Crosby, Amber and I all agreed (remember, I'm a Braverman now) because not only is Amber old enough to continue making dumb mistakes (remember when she slept with Steve in Season 1? And got in the Season 2 car accident? This totally pales in comparison), the decision lost Adam money. Which Adam needs to send his daughter to school!

Which brings us naturally to Haddie, the daughter in question. Adam and Kristina tried spending some quality bonding time with Haddie during her last week home before going to Cornell at the happiest place on earth: Burger and Pie. Does Burger and Pie exist? No, but a quick Google search tells me there's such a thing as Pie 'n Burger in Pasadena. Adding that to my California bucket list, and I'll be sure to freak out about the lack of Torpedo Burgers on their menu, like the Braverman that I am.

All Haddie wanted to do was have some alone time (with her friends), but her parents' nagging love spoiled all her fun. She freaks out, storming off instead of going to the portrait party the family throws in her honor. Viewers may think the characters are acting abnormally here, but I have to disagree. Adam's freakout over Amber has nothing to do with Amber or American Idol, it's about wanting to protect Haddie. Haddie isn't running to her friends because she hates the chaotic diner trips and Max tearing through her suitcase (well maybe that has something to do with it); she's guarding herself from saying goodbye to her family and going all the way across the country.

She eventually comes around, as we Bravermen always do, with the help of a moment with Max and newcomer Victor. She leaves behind a strong, loving, crazy family, and God only knows how many of those exist in the world (fortunately, I actually do belong to one, and I see a lot of the Ladues in the Bravermen).

Speaking of "God only knows" (now I'm just being obnoxious, both with my segues and use of asides), newlyweds Crosby and Jasmine struggled with her mother's decision to expose Jabbar to Christianity without consulting them first. Crosby is threatened be Jabbar's praying, because it means he might enter into a club that Crosby himself wouldn't be accepted at. He consults with his parents for help, who reminisce on Buddhism and tantric sex while driving home the idea that nobody on earth knows for sure what awaits us when we die, and Crosby doesn't have to provide all these answers to Jabbar.

What follows is a sweet scene between father and son as they look up at shooting stars, and Crosby explains that what he believes in is the love he has for Jabbar, Jasmine and the family. It's a sweet thought and one that more parents should use when talking to kids about religion, as it is less scary/guilt-inducing while still setting a morally positive example.

Julia and Joel were also having issues with their new adopted son, Victor. (See? Without cheesy segues it just feels like an awkward jump.) He was watching TV too inappropriate for Sydney and eating in the living room. Obviously, based on these characteristics he will grow up to be a mass murderer (that Danny Gokey will play on Law & Order!) All joking aside, he just doesn't seem to fit in yet with the Braverman clan, something the show will definitely tackle over the course of this season. His little comment to Haddie about them being "too loud" shows just how removed he is, and hopefully by season's end he will be joining in the overlapping dialogue like the rest of the bunch.

While on the topic I just want to say: please, writers, don't make Julia extremely unlikable again. By the end of last season she finally won me over thanks to Erika Christensen's amazing acting. But putting her in the position to not love her new kid, while realistic, just paints her in a bad light, golden hour or not.

Speaking of golden hour (how about THAT segue, eh?), Hank's photoshoot with the Bravermen clan gave him a glimpse at what good people they were, hinted at an attraction to Sarah and a rivalry with Mark, and connection with Max that could be a foreshadowing of Hank's own possible case of Aspergers. For now, we'll just stick to attraction, as he hires back Sarah due to her charming ways.

So after the family portrait was taken, Haddie trekked off to Cornell, so cold that Max wondered if that was the reason why everyone there killed themselves. As an Ithaca College student, I must say too soon, but still a perfectly wicked line. My main concern: why didn't Adam and Kristina accompany her? Aside from the production company not being able to relocate to Ithaca, it doesn't make much sense for overbearing Kristina to just back away now, especially for freshman year. Who is going to help her get all her groceries? And the part about her never living at home again- yeah right, bitch isn't getting a job out of college any sooner than the rest of us.

I guess all I failed to cover was Max and his bulking up for the (soon to be ex, apparently) girlfriend, which look to be more important next week anyway. Until then, it was a pleasure having the Bravermen back on my screen, and I'm seriously considering photoshopping myself into that portrait.