TV Review: Big Brother 14 Finale: On Bitter Juries & What Dan Should Have Said 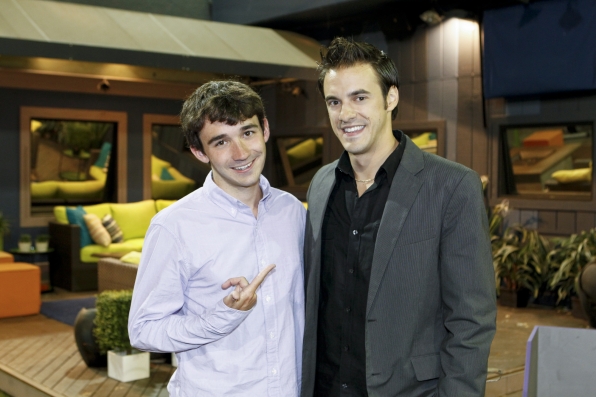 ML- First off, congratulations to Ian Terry, winner of Big Brother 14 and the $500,000 prize! He won a bunch of competitions, made plenty of friends and gave the better jury speech, securing 6 of the 7 votes and going down in history as an extremely deserving winner.

Dan Gheesling, former BB10 winner and the only person to make Final 2 both times he played Big Brother, came up short. His ruthless, "blood up to his elbows" game pissed too many people off. Plus, he already had the money, and the jury wanted to reward a newbie super-fan with college loans to pay off over the slimy, cutthroat book-peddler who stabbed them all in the back.

All that being said, if I were in the jury, regardless of whether he betrayed me or not, I would have voted for Dan. I know, that's easy to say having not been betrayed by him, but his strategic game was absolutely amazing. To me, that's the measure of who deserves to win the game, not necessarily likability or challenge wins (though those things can only help).

I feel as though reality television has evolved a lot since its beginnings, when the likes of Richard Hatch and Dr. Will were rewarded for their strategic masterpieces. I no longer think that reality show juries vote for the most deserving to win the game. In this current reality landscape, everyone expects to become a star from their exposure, or at least get a spin-off/spot on The Amazing Race. As such, jurors are by definition those that cannot win and must choose the winner. By choosing the winner, they, vicariously, "win" if their pick wins. Thus, a bitter vote is a way of stealing someone's deserved win to heal your ego and be a part of the "winning" team and making the runner-up feel your same pain. It's petty and selfish, but it's been happening over and over again on Survivor and Big Brother in ways we never saw during early years.

Imagine you're playing poker with a group of people you've gotten to know at work. You see each other every day, you form opinions, you may gossip about each other and be planning to cut each others' throats (professionally speaking), but you all know each other and decided to play. Now let's say you bluff someone and take a ton of their money, knocking them out of the game. You lied to them, deceived them about your hand. Is it right for that person to hold a grudge against you for being a better poker player? To not invite you to the next poker game because of your lie? Most people, I assume, would say no, it's just a game.

Big Brother is just a game, too. It's a televised game with goofy competitions that you can play in your backyard, with people who may as well be coworkers- they're not necessarily friends or family, but they could be one day. And yes, people get their feelings hurt along the way, but only one person can win. Everyone lies to everyone at some point, and the people who lie the best make it far, and then they are punished for lying better than others.

Dan got a lot of grief for swearing on the bible and on his wife's name. Personally, I don't take offense to either of those things in the game setting. If he did so in the real world, then sure, that would be an asshole move if he swore on his wife's name then betrayed her. But if we're playing poker and the only way to get you to play the pot for $500,000 is to swear on my wife's name that I have a worse hand than you, then it turns out I was bluffing, the blame is on you. This is a game for big money, and anything you say should be suspect as a possible lie. Now, Dan is a religious, loving man, so people thought he was telling the truth. Boom, misted. I'll be interested to see if people in the future use the bible/swearing on names as a weapon, or avoid it based on the backlash.

Another reason why Dan lost was his status as a former winner. I think the trend is finally coming around for people to turn against returning players. They've seen Rachel and Rob win, Coach and Ozzy make the endgame. They've also seen the amount of screen time new players get compared to returning ones- barely any. Not only did he get the money already, he got the attention and the "fame". As we saw on Survivor this week, people are sick of the old timers stealing all their thunder.

The main problem I have with Dan was his jury speech. Not only was he obnoxious and sucking up, he failed to highlight the strongest aspects of his game, despite it being so obviously rehearsed. Ian spoke off the cuff, was natural, and played up Dan's betrayal to the jury just like J.T. did re: Stephen in Survivor: Tocantins.

If I were in Dan's position, here's what I would have said:

"When I entered this game I had to check many things at the door. I am a religious man in my real life, but that doesn't belong in a game where you must lie, cheat and backstab to win. I am a faithful husband, but I couldn't let my emotions control my actions. However, I knew that using these qualities would be a strategic way to earn trust. I talked it over with Chelsea before entering, and she agreed I had to do anything to win this game again.

The one huge part of who I am that I was able to bring into this game was my role as a coach. I entered as a coach to three contestants, just like the others, but by the end of the first eviction I was down to only one player left and in grave danger of going home without even getting the chance to fight for myself. At that point, it was me and my player, Danielle, against 10 other people across 3 teams. I went into survival mode, knowing I would do whatever it took to coach my team to the end.

And look what happened: the two of us made it to final 3 and just barely missed out on Final 2. Love or hate what I did in this game, you cannot deny that I was effective in enacting my plans. I'm sorry if your feelings were hurt along the way, but you can't bring your feelings into this game. You wouldn't hate someone for bluffing you out of your money in poker, would you?

In the end, this is just a game, like poker is a game. I hope you guys choose not to be sore losers and Bitter Betties, because you will regret it. If you're voting for the most deserving, I feel my strategic moves have earned that title."

Unfortunately, Dan settled for patronizing the jurors and ultimately alienating them. Ian was likable, and his win made me happy; as I imagined myself as a super fan in his position, beating one of the best players ever, I was finally satisfied.

Posted by Dual Redundancy at 2:23 PM