The final acting category of Emmy Voter is also the only incomplete one. It is...

Drama Lead Actress, and it is incomplete because I'm only on season 3 of Damages and really don't want to watch a random season 4 episode and spoil everything. So Glenn Close won't be included in this ballot, but I doubt she would have won anyway.

Kathy Bates as Harriet Korn in Harry's Law
Submission: "Onward and Upwars"
A.K.A. The One Where... Series finale, where Harry discovers her first husband dies. She also sings and cries and sues the D.A. personally to defend a man considered a "person of interest" in the murder of his wife.

Glenn Close as Patty Hewes in Damages
Submission: "I've Done Way Too Much For That Girl"
A.K.A. The One Where... N/A

Claire Danes as Carrie Matheson in Homeland
Submission: "The Vest"
A.K.A. The One Where... Carrie's bipolar disorder comes out in full while she recovers in the hospital, and Saul, Brody, Estes and Carrie herself must deal with the consequences.

Michelle Dockery as Mary Crawley in Downton Abbey
Submission: "Episode 7 (Christmas)"
A.K.A. The One Where... Mary and Matthew reconnect and he proposed marriage, even after discovering the secret about the Turkish diplomat from season 1.

Julianna Marguiles as Alicia Florrick in The Good Wife
Submission: "Parenting Made Easy"
A.K.A. The One Where... Alicia has bad dreams about something happening to Grace, and Grace ends up going missing. Also, Alicia goes to arbitration with Caitlin against former job applicant Martha and Louis Canning over a woman fired for her religious affiliations.

Elisabeth Moss as Peggy Olsen in Mad Men
Submission: "The Other Woman"
A.K.A. The One Where... Peggy gets money thrown in her face by Don and doesn't feel respected or appreciated, so she hands in her two weeks notice and leaves SCDP behind.

Notes: Again, didn't get to see Glenn Close, so no input there. Bates has a surprisingly good showing, but it's not enough to compete with the rest of the ladies here. Marguiles gets to be a good lawyer and a good mom, but overall the episode is just good. Moss is not the focus of the episode, but she holds her own with handling the material in a great way.

Verdict: Dockery knocks it out of the park, but nobody can hold a candle to Danes. She received the only perfect 10 rating I gave out, and should win hands-down tonight. 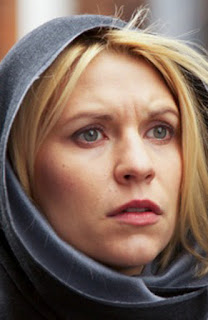