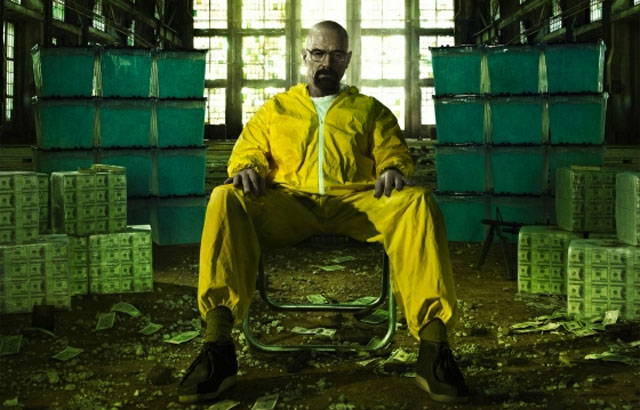 
ML- Breaking Bad has been very generous with how it has handled informing the audience of what is to come. There are great blogs that expose hidden easter eggs planted into episodes to foreshadow future events, like the pink bear in free fall in Jane's painting, or the bear's eye itself mirroring Gus' final state, or, similarly, the two-faced statue visible at the beginning of the season 4 premiere. Vince Gilligan and company have crafted a fine gem of television here, and I don't believe it's a waste of time to search for clues to the endgame of this final season premiere.

And what a premiere it was. We got to see a little bit of everyone, from the kids Walter, Jr. and Holly to Mike and Ted to the guy from the junkyard. It reminds us how many players are left on this wild chess board, and what purposes they serve. Walter, Jr. and Holly served as great foils to their father tonight; The White Formerly Known As Flynn talked to his father from such an innocent perspective on the whole Fring fiasco, and Walt had to just put up with him to pacify him. And how uncomfortable was it to see Walt interact with a baby after just cleaning up bomb ingredients? The well-being of these children was once Walt's main motivation for getting into the drug game. Now they're barely an afterthought.

I've gotten ahead of myself by skipping around in time, something the episode obviously did, too. I could be wrong, but my impression of the opening was that it was a flash-forward and not a flashback? I don't recall any time in his past when Walt would have bought a gun like that or been under the alias Mr. Lambert from New Hampshire. In this case, seeing a glimpse of a bearded Walt switching cars in a Denny's parking lot makes me think Walt is heeding Mike's advice and hitting the road, soon.

The talkative Denny's waitress brings up the concept of a "free" something, from which the title takes its name, and therefore it should be looked at. Today is Walt's alias' birthday (a sign he is just having gone on the run?) and he is therefore entitled to a free meal. He turns it down, but she goads him, saying "free is always good". After Walt's interaction in the bathroom he leaves the waitress a $100 bill, another sign this is a future scene, and makes his departure. Walt is "free", it seems, from the home ties that bind him, from the hand of the law, from anyone telling him what to do. But is it better than what he had? Is he going to continue living free, or will he die?

Back in the bedroom, Skyler admits that she's scared of Walt. I think he loves this. His ego is at an all-time high, he knows he's the baddest dude in town, and even his woman trembles at the sight of him. It's everything the once boring, disrespected physics teacher ever wanted, and he's trying to take the time to enjoy it.

Except he can't. He tries to pour himself a drink- then remembers he forgot to get rid of the Lily of the Valley, too. He goes to take another sip as Skyler and the kids arrive home. He finally takes a sip when alone with the baby- but remembers something else. He's never going to be able to have that drink, metaphorically. Something is always going to come up, either extraneous or from his own desire to keep conquering obstacles and blowing people's faces off. It's as if he's doing science experiments and solving problems, except people's lives hang in the balance.

What Walt remembers is that Gus had been recording everything going on in the now-torched lab, the files of which had been fed to Gus' home laptop, which Hank and the police seized for evidence. In order to discover all this, Walt has to locate Mike.

When we last saw Mike he was recovering from a GSW in a Mexican hospital. Now, he's peacefully feeding chickens, making sure everybody gets their fill. After getting the call regarding Gus' death, he takes off driving, and gets into his own game of chicken as well with Walt and Jesse. If we're looking for important themes and motifs here, "chicken" seems to be one. Gus ran "Los Pollos Hermanos", or The Chicken Brothers, which, in a different context, can be applied to Walt and Jesse. I've long suspected these two will come to a head, especially if Jesse ever finds out Walt's hand in what happened to Jane and Brock. Is may come down to who blinks first, who shows more compassion for the other, who is more vulnerable. That sounds a lot more like Jesse than Walt, to me.

The police have the laptop in their possession, as Mike discovers. This is another pattern for Walt throughout this whole series: someone is always a step ahead of him. Gus always was until he turned the tide and "won", but he didn't take into account the police having that evidence. Whatever Walt does, he's never going to be able to "win", because in the drug dealing business, winning is measured in the money you have when you die, and Walt isn't interested in the money anymore.

The scene where Walt and Mike argue with each other while Jesse, the voice of reason, struggles to make his voice heard is a fun one. I can only imagine being on set with these three actors, all of whom are award-worthy. Jesse mentions using a magnet to wipe the hard drive on the laptop, and from this they are brought back to the wreck yard from season 3, where they gain access to a magnet large enough to make their bogus plan a reality.

Meanwhile, Skyler meets with Saul to confirm something many fans had suspected- Ted isn't dead, just paralyzed. She goes to visit him, and we see the same fear she has for Walt in his eyes as he looks upon her. He promises never to breathe a word of what he knows, and we see Walt's same cockiness brew in her as she accepts his plea. Walt and Skyler are so alike it's crazy, but I have a feeling she may have a hand in his ultimate downfall. I think it's possible that after all is said and done, Walt may get away with all of his crimes and wrongful doings and come home to the family he once vowed to support, only to have Skyler be the one to rat him out. It may not be a satisfying ending to the audience, but thematically, it would be one of the richest ways to bow out.

The magnet test was freaking cool, and prompted my favorite line of the night, from the junkyard owner, regarding the removal of all credit cards from their person while the magnet is on: "You want that plastic working come Miller Time." I know, it was product placement, as the Miller 64 ad reminded me during the next commercial break, but damn, people really do call it that in real life.

They bring the fully-functional magnet to the station, with Mike's help getting in, and Walt begins turning the knob. First the cop behind the desk's computer fizzles out, then objects in the evidence locker begin flying off the shelves towards the wall. Walt keeps turning the dial, pulling heavier objects and increasing the chances that the information will be lost. Jesse warns him to stop, but Walt can't and turns the dial all the way. The van itself is pulled towards the wall and it tips on its side. They can't drive off.

The police rush to the van, but Walt and Jesse already escaped into Mike's car. Walt sits in the backseat, alone, as if being chauffeured by his assistants. The power pulsates through his veins, as he is so wrapped up in his own ego. He's only going to get more and more overconfident.

I found the entire magnet usage to be thematic for Walt's own influence on the people in his life. He's drawn so many innocents into his black hole of a soul, and, when advised to turn it down at the point of success, he cannot comply. He has to keep going. He's going to pull everyone down with him because he's too headstrong to go back.

The police examine the evidence and find the laptop, at least broken, but also a damaged picture of Gus and his business partner/possible lover. The cracks resulting from the magnet incident revealed an address of some type- one that is sure to led Hank to some secrets Walt does not want him to find. This, too, is symbolic- You hide secrets behind what you love, and Walt is making cracks that the police (mainly Hank) are starting to see through. It won't be long now before they're onto the real Heisenberg.

In the end we're treated to two scenes of Walt interacting with those he feels superior to- Saul, who betrayed his trust by siding with Skyler in the Ted decision without consulting Walt. Saul sees the terror Walt has become and says they're done, but Walt asserts that they're not done until he says they're done. And, again, as we saw from the magnetic dial, Walt will not say "when". If you're playing chicken with him, you're going to lose.

Finally, Walt comes home and finds Skyler in the bedroom. She tells him about Ted's promise not to spill, and he hugs her. It's not a loving hug, but more of a constraining, engulfing hug. He's holding her body close to his, within reach. He tells her he forgives her for sleeping with Ted, but does she believe him? I doubt it, but she has no other choice than to go along with him. If her choices are live free or die, she's certainly not living free under his control.

One last prediction: If Jesse survives until the end of the series, the last word of this show will be "Bitch." If not, it will be his last word. It's just too iconic of an end cap to not utilize (like the eye closing in Lost). Make it happen, Gilligan.