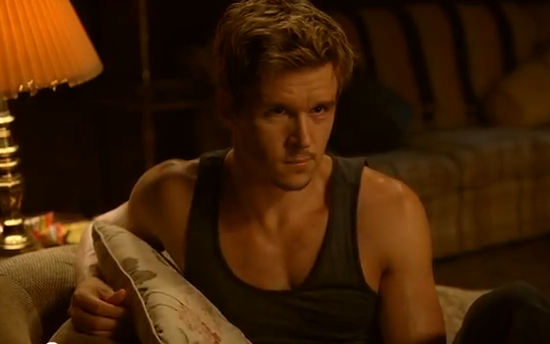 
ML- Tonight's episode was titled "Hopeless", which describes the state of many of the characters at this halfway point of the season. This week's review will rank their story lines from most hopeless to actually looking up... for now.

Roman and the Authority: Obviously, Roman got the short end of the stake tonight as Russell Edgington managed to break free and gain some street cred back. I'm surprised Chris Meloni only lasted through 5 episodes given the intense press storm that preceded his arrival, and disappointed that he never got much to do except walk around one set piece and spout religiously/politically-charged dialogue. It's obvious Salome was the traitor now, yes?

Terry and Arlene: After getting chased by the Lost-rip-off smoke monster (I believe he actually referred to it as a smoke monster tonight) and hopping out of Patrick's moving car, Terry told Arlene he had to leave her and the kids behind or else trouble would come their way. I genuinely like them together so I hope (and expect that) things will work out once the ifrit business is dealt with. Can Sookie's microwave hands defeat smoke monsters, too?

Hoyt: You know it's a messed-up episode when getting drained by a strange vamp to the point of barely being able to walk is the third-least hopeless thing that happens to someone. Not only that, he got  denied by Jess again, who he claimed loved him despite her cruel words, and by the way she reacted I think he was right. Why can't these damn kids just get over their baggage and have fun! Now Hoyt is in the midst of the Obama Supe Killers, who use have a history with him as they saved him. Will Hoyt join their cause or report back to the vamps his findings?

Eric: Sure, he and Bill successfully captured Russell, but his sister Nora has shown her true colors as a Lilith-worshipping extremist, swaying around in her prison cell. Eric doesn't believe in anything other than himself, as Roman pointed out, but is he making the correct assessment, or is there something to the whole Lilith religion?

Lafayette: His trip to visit Ruby Jean resulted in him realizing that he must confront Don Bartolo, Jesus' creepy shaman grandpa, in order to find closure with Jesus' spirit. That can't end will for LaLa, who will undoubtedly cuss and bitch his way through dealing with all that supernatural shit all over again. Ruby Jean, however, was undoubtedly hopeful today, mentioning the "elestrisity" running through her body.

Sookie and Jason: Jason led Sookie to the faerie nightclub, which looks like what I expect Lady Gaga's living room to look like. There they discovered their parents were in fact killed by a vampire the night of the flood because he/she was drawn to young Sookie's blood on a band-aid left behind in the backseat. This obviously isn't something Sookie or Jason wants to hear, but it sends them on a path towards getting revenge. As Jason told his dad in a dream, he swears to take down the vamp responsible. You can't be completely hopeless when you have a plan, right?

Sam and Andy: Sam and Luna were rushed to the ER while Emma escaped to Martha's house. Both Sam and Luna were fine for the time being, and Sam set out to find the humans responsible for this "hate crime" while Luna allowed Martha to care for her granddaughter while Luna healed. Sam enlisted Andy in hitting up the gun shop of vamp-hating extremists, and while Andy asked the cashier some questions, Sam smelled the cashier get frightened and shot him with a crossbow before he could fire a bullet at Andy, but not before he disclosed that thousands of wooden bullets had already been sold.

Alcide: He was first glamoured by Eric into not remembering the events at the asylum, but retained many of the memories and all of them with Sookie's help. He recalled there being wolves amped up on V during the fight, so he returned to take the position as pack master, which he earned after killing Marcus. The current pack master referred him to the law which stated he had to choose a second and both would battle against him. A woman from the group stepped up, setting the stage for a power struggle that could make Alcide the top dog in the wolf pack.

Overall, I'd say this was a weaker episode of the season, but Russell's liberation definitely sets the stage for good times up ahead, as does the information about the Stackhouse deaths.