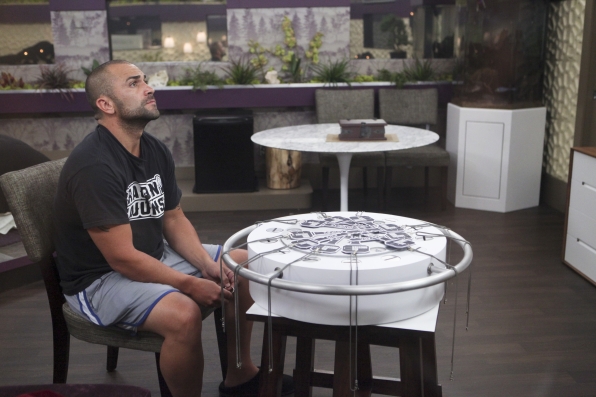 ML- It's ironic that one of the most talked-about people in the Big Brother house this season isn't actually in the house, but rather is the Big Brother of someone playing! HoH Willie Hantz opened up to his alliance about his lineage to Survivor's Russell, a smart move given they look exactly alike and lying about it would paint him in a bad light.

Appearances and accents aside, Willie doesn't remind me anything of Russell. He's not cocky at all, and actually shows some vulnerability. He understands it's a social game, something Russell never gathered. Most of all, he's likable, and doesn't proclaim how wonderful he is or speak in the third person.

Speaking of wonderful, did you know Jenn played in an all-female heavy metal band? Because she hasn't mentioned that at all to anyone or the camera.

We got a lot of Ian being a creeper tonight, something I frankly don't understand. I'm not saying I haven't fantasized about crawling under the couches in the BB house, or spanking myself with spatulas and passing gas in pink underwear, but given the opportunity I wouldn't actually do any of those things. I'd rock a green banana hammock like Wil, obviously. Big Brother is a social game, and Ian seems to have no social awareness whatsoever. I think he and Russell would be a

The coaches took sides, with Boogie offering a chance to "Will it up" to Dan, referring to his infamous partner from seasons past Dr. Will, and not Willie or Wil, the people actually in the house. Can we at least cast some people with different names next year? Either that have a house full of Mikes- myself included. Dan warily agreed to the pact.

Janelle and Britney, however, were onto the boys' plan and quickly formed their own mega-alliance. They actually included their contestants in this plan, something Dan and Boogie didn't seem to do. I give props to Janie and Brit for organizing this so quickly, as it appears to have a strong backbone.

Willie did some strategizing with the house, and his encounter with Frank had a lasting impression on him, at least enough to merit a confessional. He found him threatening, but also trustworthy. Frank felt the same, as he told Boogie he felt his chances of being nominated were 1 out of 10.

Julie introduced a brand new competition to the house- Coach's Comp, which gives the winning coach the power to save one of their house guests from being nominated or backdoored that week. This is a great twist, in my opinion, that really integrates the coaches with the house guests.

The competition was a derby-style horserace that borrowed from a classic Survivor challenge done in Seasons 10, 13, 17 and probably others: Two contestants run in the same direction around a track until one catches the other and "tags" them, or in this scenario, pulls the tail off of their horse. Big Brother may be the most strategic game in the world, but it's competitions sure are the stupidest.

Boogie won his heat against Britney "Strength of a 6-Month Old" Haynes, and Dan threw his race against Janelle to keep the heat off of Danielle and Kara. The BB: All-Stars rivalry came to a head in the final round, which Boogie dominated, giving him the power to grant someone safety.

He chose Ian, who spends all of his time bouncing on a ball in the pool rather than actually talking to people. Is it a smart move? Perhaps, as it grants someone on his team safety, but it puts pressure on Frank and ROCKSTAR Jenn by the HoH. Good for Ian, though. Maybe he can learn not to creep on the girls in the shower and start talking to them at dinner? One can only hope.

Each coach also had to pick 1 Have Not from their team, and Shane, Danielle, Ashley and Ian were chosen to eat slop and sleep on the terribly uncomfortable-looking beds. I don't think the Coaches Comp winner should have had to pick a Have Not, but regardless, it's a good way to put people from different groups in a room together.

Britney, Janelle and Willie had a pow-wow and determined Boogie and Dan's MVPs are Frank and Kara and it might be smart to attack them at the jugular early on. Boogie suggested Willie nominate JOE, WHO HAS STOLEN DAN'S STATUS AS DIARY ROOM SCREAMER AND COOKS TOO MUCH DAMN FOOD.

In the end, Willie stuck by his alliance and put up Kara and Frank. Both of these players look like great players and threats down the road, so it's huge for Willie to have targeted them so soon. Will it bite Willie in the butt if Frank manages to save himself and gets revenge for their broken agreement? Anything can happen in the Big Brother house!


SPOILERS AHEAD: LIVE FEED RECAP!
It's hard to believe but it's Day 9 in the house, and the PoV ceremony has already been concluded! Here's what's been going down:
-Shane won PoV, in a competition that had to do with sliding around (Shane and Frank scuffed themselves up) and collecting exact change and throwing it into something. The players chosen by draw were Wil, Shane and Danielle.
-Shane planned not to use the Veto, as it would put his alliance in a bad position and he wants either Kara or Frank out anyway.
-Ian has weirded everyone out in the house, from quacking like a duck to kicking himself in the face. Many on Britney and Janelle's teams are convinced he's America's Player.
-The Have-Not room has been brutal for those sleeping in it. Ashley and Shane both hurt their backs.
-Britney and Janelle have had private discussions about the possibility of entering the game at some point. It doesn't seem like they know this for sure, but they surely expect it as a possibility.
-Wil, Britney and Janelle are all very close and are planning a "girls alliance" with Ashley and JoJo.
-The gameplay has been harder than ever thanks to the coaches' presence. Dan has been telling Kara and Danielle what to do and who to talk to, as they can't even think for themselves. Britney has surprised me by how good of a coach she has been, constantly playing the game for her people. Boogie seems disappointed with his people, as Ian needs coaching in basic social skills and Jenn is a creep. Janelle has given good advice to Wil and Ashley, but not so much Joe that I've seen. Joe's plan is to stick by Wil.
-Boogie has alienated everyone in the house, and even Frank is telling people he wants no part in listening to Boogie. Boog did have a point today when he called out the messy girls on not cleaning, as now they've got tons of ants.
-Danielle is super into Shane and apparently is here for a showmance. Shane is going to use her but has no feelings for her (or so he says to his alliance).
-Kara has been super paranoid and trying to talk to people, while Frank has been quietly trying to make alliances.
-As of right now, it's still unclear who is going home. Jenn and Ian will vote for Kara and Danielle will vote for Frank, but the rest of the house plans on voting together. They're torn between booting Kara in order to systematically get rid of Danielle next week so that Dan is gone for good from the game, and kicking out Frank, who knows the game very well, is a major threat (he nearly won the PoV) and has been making the same deals to Britney and Janelle. At this point, it could still go either way, but HoH Willie wants Kara out because he feels if she wins HoH she'll only come after him and Shane, whereas Frank would also target Wil. Britney wants Frank out, as he isn't keeping his word.
Posted by Dual Redundancy at 5:58 PM