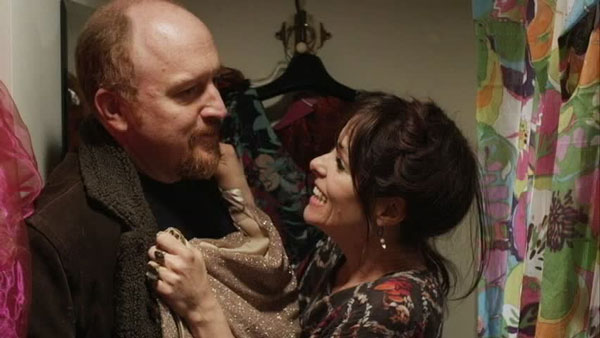 ML- There's a trope in film and TV called the "Manic Pixie Dream Girl". It's extremely well-known, and refers to a female character that is so quirky and odd that her sole purpose is to drag the hero into unfamiliar territory so he can get a feel for a different walk of life. Louie found the MPDG of all MPDGs tonight, and he couldn't have gotten a better actress to play her than Parker Posey.

Posey seemed drastically different from her character in last week's 'Part 1", which was kind of the point. Her personality seemed to shift, leaving me to wonder if it was some type of bipolar/dissociative identity disorder causing her to behave so erratically. We saw the bartender turn her away, knowing she couldn't handle 2 Jaegers that early at night. I expected a pathos-laden reveal of her inner demons, like the episode "Eddie" last year. There was a lot of that type of thing tonight, but not the way I expected.

After being turned away at the bar, Louie and his unnamed lady walked down the street, because she loves to be able to walk in New York without having to stop. Louie agrees, but she calls him on his bluff. He hates walking, because he's fat. She agrees and says that tonight, they have to be perfectly honest with each other.

This fits into the theme established in the opening stand-up of being yourself while with women and the struggles women have. Louie the comic says after taking a girl out for the first time, as soon as the door closes he farts forever. Throughout the episode, we see Louie struggling between who he is, who he wants to be and who she wants him to be. Rarely do any of these overlap. We see his date, who leads him on to believe her birth name was Tape Recorder with an elaborate story to back it up, open up about her past struggles with a carcinoma that lead her to drop out of high school at 15. Or so she says; despite her claim of all honesty, she obviously lied to Louie in the beginning about the bar, so everything she said after deserves an asterisk next to it.

The most obvious representation of this metaphor in action is when she asks Louie to try on a golden dress. He doesn't want to try the dress on, but she begs him to. And he does what people do in relationships every day- he folds and appeases. He humiliates himself for her, and she dubs him "great".  That's relationships in a nutshell right there.

Posey was absolutely brilliant here and should be nominated next year in Guest Comedy Actress (along with Melissa Leo from a few weeks back) but the character was a little too MPDG to be believable. She tries exotic fish, helps out bums on the street and fantasizes about going to North Dakota, but refuses to ever go because she wants to hold onto the desire itself. I'm sure CK was aware of the trope as he wrote this episode and he wanted it to be an exaggeration, but he may have overdone it too much.

She leads him to a building and asks him to trust her to climb all the stairs to the top, something out-of-shape Louie dreads. He does it, however, because she promises it'll be worth it. It's what anyone would expect: a view of the NYC skyline, something a panting Louie has no use for.

When she sits by the edge, things start to get real. He beckons for her to step away, but she hits him with some reasoning: the only way she'll fall is if she jumps, and she's not going to jump so she's not afraid. But since he's afraid to sit, part of him wants to jump. This roundabout logic is actually a moment of clarity for the pair, and soon after she undergoes a visible dispositional shift and mellows out.

She asks to go home and finally introduces herself as Liz. Here, Posey represents the feminine mystery that eludes all men, the shapeshifting, unpredictable, uncompromisable force that can talk you into humiliating yourself, or open your eyes to something you never new about yourself. The trope may be overused in all fiction and overwritten in the episode, but it does the job of allowing our self-centered protagonist to explore the world and change, even if it's just into a gold dress.