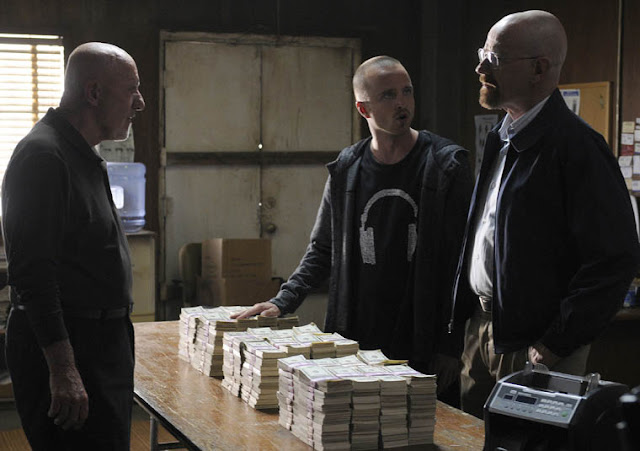 ML- I watched and took notes on this week's Breaking Bad as it aired on Sunday, but due to technical difficulties and sheer exhaustion I was unable to get to this review until Tuesday night. Unfortunately for everyone, I'm now pretty removed from the episode to give my clearest insights, so I'll be adding in the usual plot recap with some musings on television in general.

It's been said that it it possible to make a perfect film, but not a perfect TV series. Look at Lost- season one was damn near perfect, but the show stalled and faltered much over the next five years until reaching a polarizing finale (which I happened to love). A film can be shot in a matter of a few weeks, while TV series take years, which leaves plenty of time for bad stuff to happen likes kids getting older, actors getting into legal trouble or audiences getting bored.

For my money, Breaking Bad is a perfect television show. Since the beginning, it hasn't seemed to quiver at the reaction of the audience, or the Nielsen ratings, or the conventions of dramatic storytelling.  It truly feels like one long, thrilling movie (can it be that this whole series has only taken place over one year so far? Bonkers). While I haven't seen The Wire or The Sopranos or The West Wing, so those critically lauded shows may in fact be perfect as well, but Breaking Bad is the only one I've seen to stick to its guns and offer an uncompromising, high-quality view throughout every episode of every season.

Mad Men is a close second, because, for better or worse, the tone has shifted drastically since the beginning of the show. Yes, it's because the time the show is set in has changed, but comparing season 1 episodes to season 5 is like comparing Walt's meth to Gale's: quality is high, but the small differences are influential.

Other high-quality shows like Six Feet Under and Friday Night Lights suffered some shaky plot lines and seasons, and comedies like Arrested Development, Community and even Seinfeld all had some episodes that missed the mark. I, too, feel that creating consistent comedy is harder than creating consistent drama, because it's hard to find humor that appeals to the full spectrum of audiences. But that's for another completely unrelated TV Review.

Hold on, Skyler White has something to say:

Well I guess I'll keep my thoughts about TV to myself then....

... yeah right no way. I can't stay away from talking about this show, and if you're reading this, I bet you can't either. So let's cut the chit-chat and dive into the episode:

We started with Mike posing as a paralegal to get one-on-one time with the men on Lydia's list. So far, everyone has proved loyal, but since the feds have seized their hazard pay, rats could begin to emerge. These people have families they need to protect, just like Walt, Jesse and Mike.

Walt moves his things back into the apartment and lingers on a copy of what appeared to be "Leaves of Grass" by Walt Whitman, who has come up many times in the past on this show, most memorably when Hank sniffed out Gale's "W.W." obsession in the journal and Walt pinned it on Whitman. From what I saw on "Leaves of Grass", Whitman was writing it up until he died. Is this a foreboding sign for our Walt? Can we even call him "our" Walt anymore?

Saul isn't too keen on turning the three amigos into four with Mike's addition, but they hit the road to find a new place to cook. After a few less-than-stellar locales, they come across the old laser tag place, where Walt finds his inspiration. He doesn't want to cook there, but rather sees something that gives him the idea: They'll take over houses being fumigated and set up temporary labs that will be broken down by the time the house is finished. Brilliance.

Jesse gets Skinny Pete and Badger in on it, as they buy cases for hauling musical equipment that really will carry the lab parts. Saul has an in with people who can get into the houses, one of them being Jesse Plemons (Landry Clarke of Friday Night Lights). The plan comes together, and their new venture, Vamonos Pests, works like a charm.

That is, until payday arrives. Mike divides up the fat stacks of cash, and Walt is pissed to see his hard-earned share be depleted into the hazard pay accounts. This isn't how he wants to run things, but Mike doesn't care. Just because he shot Jesse James, he lectures, doesn't make Walt the next Jesse James. Walt is constantly trying to stop being the nerdy physics professor with cancer (which he didn't actually deny having to Marie), so the comparisons to the late Gus Fring still irk him. He feels he is entitled to all the power and intimidation that Gus earned over many years of dominance in the drug game. It's been less than a year for Walter.

They're making less than they did with Fring, Walt complains. Jesse shows him the bright side, though: they put out much less product to get proportionally more money. A "bigger piece of the pie". Walt wants the whole pie, and reminds Jesse about what happened to Gus' peon Victor when he "flew too close to the sun". Was this directed towards Mike, Jesse or both? Walt is wild with power right now- power he doesn't really even have.

Jesse broke things off with Andrea this week after a talk with Mr. White about secrets. He planned on sticking with her for the long haul until Walter reminded him how he'd have to live with the secrets of what he does and did (like killing Gale) forever. Secrets, Walt explains, create barriers between people, and soon everything you've done is a part of you. By this definition, Walt and Jesse are becoming some bad dudes, and only one of them seems happy about it.

Walt's interaction with Brock at Jesse's house was just perfect. There was a tangible barrier in that room- we got to see Walt bond with Jr. and Holly like a normal middle-aged man (over Scarface, not planned to coincide with AMC mob week or anything) but with this boy he was shut down, or rather, shut in on himself with all of the horrible things he'd done.

The one horrible thing he did this week that I absolutely loved was his handling of Marie. Skyler gets the MVP award this week for saying what the audience has been dying to shout for years now: SHUT UP!  BOLD BREAKING BAD PREDICTION: Someone will strangle Marie, killing her, shutting her up and turning her face purple. You heard it here first!

Marie goes to Walt to meddle some more and find out what got Skyler all upset about him. He uses her break of character as a punishment and tells Marie about the I.F.T. affair, one again making himself look like the good guy and Skyler the villain. Skyler knows the truth, however, if her shell-shocked face during the shooting scene in Scarface was any indication. My confidence in my prediction about her going to the police is strengthened this week. And Walt, like Tony Montana, is going to go down guns blazing.