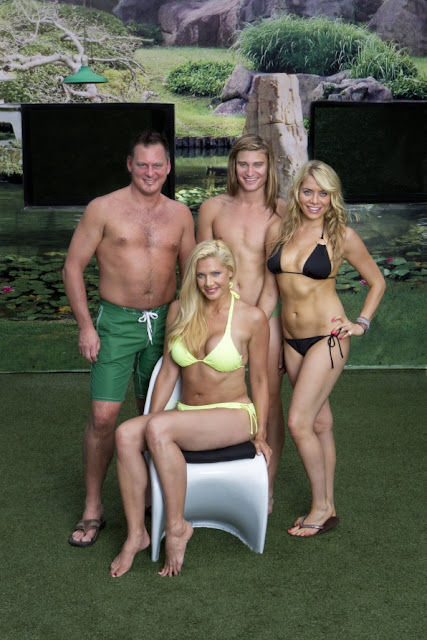 ML- Britney and Shane mocked Janelle's players and couldn't wait to kick one of them out of the house. By the end of the episode, it seems as though all of them will survive into next week. How'd they manage to pull that one off?

Much of their success can be attributed to Ian, whose inability to commit to saving Shane next week sent Britney into a frenzy and turned the target back onto Frank. But Janie and Joe did their own share of the work, the former offering her wedding ring and Chanel earrings as collateral, the latter making weird metaphors to rock climbers and the president.

Joe was not happy to be up basically only because he's Janelle's player, though his personality obviously didn't help his case. Janelle wouldn't let her people freak out, nor would she let them give Shane or Britney an ounce of breathing room during the week. Ass kissing, though embarrassing, is a good strategy in Big Brother. Wil claimed he doesn't want to be known as an ass kisser, and there is absolutely no joke to be made there. Joe tried his best, but obviously, gentle tones and smooth deliveries are not his strong suits.

The Veto was similar to one in BB13, except this time instead of Greek gods and goddesses, the contestants were dressed in clown suits. They had to run to keep two balls off the ground as they rolled  up slanted paths. Once you dropped a ball, you were out.

The competition went pretty quickly tonight, as Wil, Joe, Frank and Danielle fell out, leaving only Shane and Ashley. Shane defeated the klutzy Ashley to score his third straight veto, probably sending past all-time veto champs Janelle and James Rhine into panic mode. Is he the Michael Phelps of Vetoes?

It was then do or die time for Joe and Team Janelle, as they made as many offers as possible to get Boogie and his people out of the house. I've got to hand it to Janelle, she really does hustle to get her way in the house. Along with Ian's slip up, Shane and Brit decided to explain the backdoor to Frank in a way he might not expect to go home. It didn't work 100% as planned, but at least there wasn't a big blow-up- yet.

Britney likened Boogie and Frank to a dragon and its head- are we getting some more Survivor cross-over here with Coach? Is this all one big elaborate ploy to get Big Brother fans used to hearing "coach" and "dragon" so next season they can do a BB/Survivor mash-up? I'd truly dig that.

Tomorrow night we'll see if the coaches enter the game (they probably will) and who goes home, Frank or Joe (if they're smart it'll be Frank, but I can't stand listening to Joe's confessionals anymore). If Frank does go home, I'll be looking for a new Winner Pick. Leave me your suggestions in the comments below!

Posted by Dual Redundancy at 8:04 PM