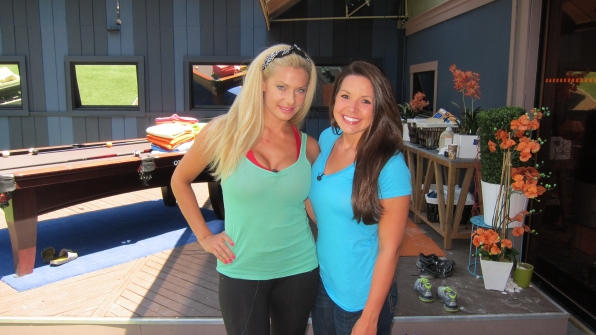 ML- There's no point trying to even play like I'm unbiased when it comes to Big Brother. Nobody involved is- Grodner, the players, the fans. So I feel comfortable saying I'm pissed off at how this week's backdoor went down.

If you only watched the episode, it probably made sense. But if you were a live feed viewer, you saw a lot more information that paints the remaining houseguests in a different light.

Like Danielle. If I ever met her I would probably curse her out. She talked so much trash about Janelle this week with people who have talked even more trash about Danielle in the past. She, Britney and Wil are the cattiest of BB players and I can't wait for all of them to get their comeuppance. And, again, when they do and rejoin the Twitterverse, I will be sure to express my discontent with them.

Did Janelle make a blunder worthy of her certainly early eviction? Possibly. If you watch the live feeds, she didn't actually pause for so long and give no response after Boogie threw out the possibility of evicting Joe. She paused, then agreed to lose Joe. However, that would paint Boogie and Dan in a negative light, and the editors need to spin this as positively as possible against Janelle to keep the fans watching. And all I have to say is bullshit.

Many alliances were formed tonight, from the Quack Pack (Danielle/Dan/Britney/Shane/Ian) to the "Avengers"-like Silent Six (Danielle/Dan/Britney/Shane/Boogie/Frank). If you watch the feeds you know another alliance, TiTs, was formed, compsed of Wil/Ashley/Jenn/Joe. It's sad that at this point, with Janelle out of every alliance, my support doesn't go behind her players, but rather the ones who had to fight desperately to keep themselves in against her (read: Mike and Frank.)

I won't comment on the scripted DR session with Frank, Boogie and Ian. All I will say about Danielle is that she;s lucky she positioned herself into a showmance so that Grodner has a reason to portray her positively, because all of the bitter, bitchy, petty, literally CRAZY talk she's shown on the feeds has painted her in the exact opposite light. She doesn't understand how badly everyone, including Shane, has spoken of her in the past.

I will praise Dan, Boogie and Frank, though. If Janelle can't make it to the end of this game and finally win, I hope one of these three deserving players will do so. Joe, Ashley, Wil and Jenn are four of the most worthless players to enter the house, Britney and Danielle are some of the most personally-affected people to play. Danielle ruined her HoH by adding an unneeded target on herself by saving the life of her main target, who was shown saying how little he thinks of her and will surely win and nominate her down the line, when Janelle had much bigger fish to fry. Danielle overcompensated this week, like she has done in her "relationship" attempts with Shane, in her attempts to feel important, powerful and gain acceptance. She may have done so temporarily with other players in the house, but I guarantee she will never be beloved like Janelle or Jordan, who I compared her to a few weeks ago.

We got to see a rehashed Veto of contestants trading prizes as they are eliminated. In the end, Shane got a veto ticket, Jenn a Maui vacation, Wil $5,000, Ian the life of a dog for 24 hours, Frank a Spirit-tard and Danielle the Veto. Thanks to some carftiness by Boogie and Frank, Danielle agreed to spare her target and nominate Janelle, only after Dan gave her the go-ahead when he felt she couldn't be trusted.

I fully expect Janelle to exit the house tomorrow night. It would be stupid for them to keep her around, obviously, and she has no real allies. Janie represented the pre-Grodner era where competitions could be won without any "help" and twists from America didn't come around at the most convenient times. That being said, Janelle had 3 surviving mentees that showed her no respect, perhaps because they didn't feel they got any from her. Personally, I think they were all ungrateful, Janellous bitches who will  get their asses handed to them by the majority alliance in the coming weeks.

So Viva la Silent Six, though it is no equal to the Sovereign Six of BB6 history (Janelle, Howie, Rachel, James, Sarah and Kaysar, for the forgetful ones out there). You've gotten rid of the biggest threat who had the least amount of allies and solidified yourselves as asses to the fans. Can't wait to see a 12th-place finisher win fan favorite over all of you.

Episode Grade: A- (Editing wise, well done for what they wanted to tell, not for what happened).
Episode MVP: Mike Boogie
Original Airdate: 08/08/2012
Posted by Dual Redundancy at 11:58 PM