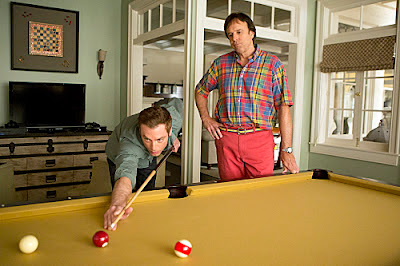 ML- Maybe it's the fact that I'm watching this at a reasonable hour and not after taking notes on BB/True Blood/Breaking Bad before it, but this week's Weeds was a step up from previous weeks, for me.

It's a shame that Justin Kirk has never gotten Emmy love as Andy. I know I've said it before, and I'll probably say it again before the show ends. He handles his meandering lines with expertise, while Kevin Nealon is left with crass, short-but-gut-busting spurts of immaturity. The two of them play off together very well.

I even liked Jennifer Jason-Leigh tonight in the scene where Jill and Andy discussed the possibility of raising a baby together. Probably because she didn't say much and let Andy do all of the scene-stealing. But could pregnancy be a good thing for her now? Give her a boy, she doesn't need another girl.

Nancy was back to her old tricks on the soccer field, getting close to frustrated dad Terry whose son sucks at soccer and ruins Terry's love life. Once Nancy finds out he works for a prescription drug company peddling pills "legally" and can throw her name out there for a job, she agrees to take the monster child in for a sleepover with Stevie.

The kid is a menace and Stevie ends up smacking him with a play castle. Nancy separates the boys and sits Terry's son down for a mature chat about turning your life around. She then passes him off to Shane, whose presence in the episode is smaller, doing the classic "writing someone else's papers for money then getting caught" story, though it had a happy ending. Shane also recorded a funny Occupy Wall Street parody with the young boys that will hopefully have relevance next week, or else it was kind of unnecessary.

Silas found RJ stacking cups in his hospital and tried to get him to go to the stolen weed. Instead, RJ directed him to where it was: his parents' house. Silas showed up in full robber attire expecting nobody to be home, when he walked in on a birthday party that expected him to be the stripper. He got home drunk and talked with Nancy about his issues, then did a "go stripper, go stripper" dance that allowed Hunter Parrish to be a little fun, for once.

But, as I said, the best part of the episode was Andy, Doug and Jill. Doug suggested getting Jill to go horseback riding and fall in order to abort the baby, but Andy wasn't having it. He vowed to take on the child (which he still isn't sure is actually his, yet, and I'm unfortunately guessing it won't be).

Things were looking up all around for the Botwins. Nancy got a job with Terry's company, as did Shane, in exchange for some more sleepovers. It's all worth it, though, considering the nursery set-up the company has going on in case the government OK's a THC pill. But can Nancy handle not being the big fish at this corporation?

Posted by Dual Redundancy at 4:14 PM