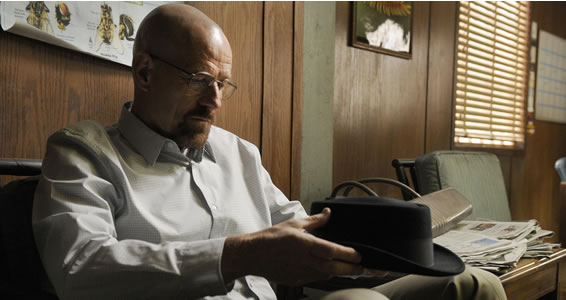 ML- I think its time we addressed the "Skyler Problem".

In seasons 1 and 2 I hated Skyler White. She was annoying, intrusive and ruining all the fun we wanted Walter to have as he got deeper and deeper into the drug game.

Since then, I've seen Skyler in a whole new light, and I think that's because I've grown to love and respect Anna Gunn as an actress. The scene last season where she discussed her "bullet points" with Walt on his fake gambling addiction is one of my favorites the show has ever done. She's knocking it out of the park acting-wise, playing a character who just sucks all of the fun out of the room.

But I don't hate her. I see tweets from people who can't stand her, and try to respond in ways that will help change their minds. She made some bad decisions to follow Walt down this path, sure: remember when she went to the four corners and flipped her coin to decide her fate, then kept flipping when she didn't get what she wanted? She has nobody to blame but herself.

That being said, look at what she's living with. Walter is a jerk to her and a genuine monster of a person. The fight scene, which I think could sell-out theaters as a one-act play, showed just how scared she is and the lengths she will go to protect her children, something Walt vowed to do as well. Yes, she can be annoying and boring and bitchy and hypocritical. But she may be the only hope of bringing down Walter White.

Then again, she may not have to do anything at all. Hank and the DEA made progress sniffing out more Madrigal employees, causing Lydia to panic and call Mike requesting help. Her guy, Ron, is no longer available to drive the trucks. Mike says he'll send a new guy.

The guy was Jesse, who she skeptically lets into the warehouse to grab the methylamine. There's a problem, though- they spot a substance on the bottom of the barrel that Lydia recognizes as a GPS tracker. Jesse reports back to Mike and Walt, empty-handed, but Mike is suspicious that no other barrels were checked and suspects Lydia is pulling the wool over their eyes and trying to dissociate from Mike and their deal. Mike vows to take her out, Jesse votes against it, and Walter refuses to let anything stop them from cooking.

Walt didn't have a very good pre-birthday. It started off fine- he and his son went to get the Pontiac fixed up and decided to lease some hot new sports cars. He and Walter, Jr. pulled up into the driveway in style, but Walter, Jr. wasn't too keen on his car choice. So in a brilliant, wordless scene, the father and son pulled up again, this time Jr. in a different car. It seemed like a dream sequence, which was the perfect feel to give a sense of Walter's reckless, idealistic mindset.

After dinner, Walter explains to Skyler that he only leased the cars in an attempt to cover his tracks. SHe asks if he's back at cooking, and he mentions he has to make up for the $600,000 she gave Ted. She then suggests boarding school for Walter, Jr. The kids, she feels, need a new environment.

Walter disagrees. And that's that. And he wants a big birthday party. With chocolate cake and chocolate frosting.

And life is good. Because he says it is.

The next morning he gets his bacon on his eggs, a White family tradition that confirms the 1-year gap between current events and the flash-forward we saw as the season's teaser. With all of the crap that occurred over these 4.5 seasons fitting into 1 year, it's hard to imagine how much can change within another year.

Hank has been spot on about Gus and his crew every step of the way, and he is offered a promotion to give up his day-to-days (Fring case included) for a better-paying, more political job. he takes it, but I don't think he's done with the Fring case just yet.

Walt leaves Jesse early at work because he expects a big birthday party. He opens the door to the house and his face drops- it's just his son on the couch, not a room full of people praising the ground he walks on. Skyler invited Hank and Marie, cooked some meat and potatoes, and even ordered the chocolate cake. It's hard to believe Walt really expected her to throw anything major together, but again, he is blinded by his idealism and own ego.

The second best scene of the night goes to Marie and Hank in the car as she pulls a classic example of refusing to tell someone a secret while promptly giving everything away. It is a great, funny moment for her character and its nice to see she and Hank bond after all of their animosity last season. It involved infidelity, that's all she was going to say. But not Walt.

As Walt reminisced on his journey and how things have fallen into pace for him, Skyler lingers by the edge of the pool, staring into the water. He asks her to remember his first week of chemo, and she does, painfully. Instead of doing so, she'd rather wade into the cold water and nearly drown herself.

The pool has been a major force in Breaking Bad, after the events of the plane crash in season 2 and the cartel member's death last year (different pool, but still). For our characters, the pools may represent drowning, being enclosed and trapped. It's from the pool that the one-eyed bear is plucked, a symbol of Walt's descent to breaking bad.

Here, Skyler uses the badness as an empowerment opportunity. She has Marie ask Walt if she can take the kids, as it may be better for them than to be around their suicidal mom. Skyler descends and puts herself into danger to protect the kids, just like Walt. And when Walt confronts her, in the best scene of the season thus far, it's clear that the danger she's putting herself through is being with him. He tries claiming there is no danger, Gus was the danger, and she quickly retorts that at one point he proclaimed "I am the danger." To whom is he dangerous to now with Gus gone?

He grills her on her grand scheme here to pick it apart with his own honed skill of finding flaws in plans. She wants the kids away so they don't have to be around the family business of making meth and lying to everyone. She can't have them around while he makes rationalizations and shrugs off dealing drugs and killing people as "shit happens".

She says she'll hurt herself again if she has to so the kids can stay away longer. He counters that he'll put her in a facility where she'll need inpatient care. She says she'll bruise her neck and eye and blame it on Walt beating her after discovering her affair. But does she want to drag Ted deeper into things and paint Walt as a wife beater to their children? Walt is quick to see all of the negative paths her actions take and doesn't give her an ounce of room to think or even breathe.

Unable to handle his interrogation anymore she cracks. She has no brilliant plan. She can't go to the cops and she can't keep him out of the house or even out of her bed. She does have one failsafe, though: wait until his cancer comes back to kill him. Let him self-destruct, as a result of both the cancerous tumors and his darkened soul and bad decisions.

This time metaphor pops up again when Jesse gives Walt a present- a new watch. In the very next scene, a loud ticking can be heard from Skyler's room. Walt's time is running out, and everyone knows it. He tells her that the watch was a gift from someone who just weeks ago wanted him dead, and he can turn Skyler back to his corner. Not seeing Gunn's face for this scene worked well, because we got everything we needed to by her body language. Just lights up a cigarette, as if perhaps some smoke will make its way into his lungs and, if she's lucky, knock the first domino.

Now we're halfway through with the season. It's hard to believe, but 8 episodes goes a lot quicker than 13. Where do you think the show is going in its final episodes? Will Hank make the connections to Walt? Will Mike kill Lydia, and if so will he get caught? Will Skyler go to the cops and report what she knows? And will Jesse finally get an episode where he has a lot to do? Please, writers, give him something to work with! Leave your predictions in the comments.


Posted by Dual Redundancy at 9:55 PM