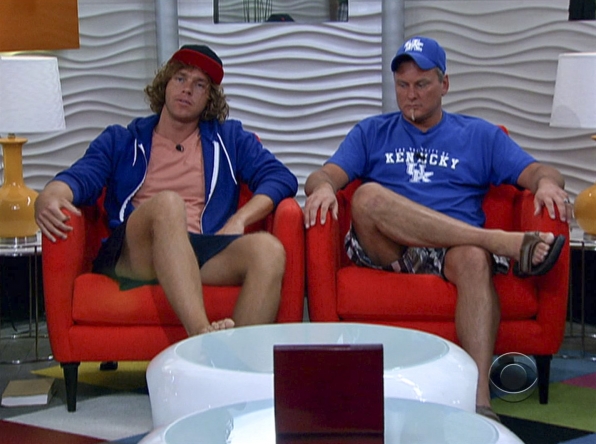 ML- I didn't expect to be shocked by the decision tonight, but boy, am I surprised.

It all started off with Shane making either the biggest or the stupidest move of the game in nominating Frank. Britney said it was the only move that would keep Frank from winning the half-a-million bucks. It was smart of him, no doubt, and he was even smarter to play it as if he had no intention of eliminating Frank.

Boogie had a great line after Ian justified not committing to Britney- "This is Big Brother. You can bounce checks." Actually, all the coaches (minus Britney, who barely counted in the first place) had some good advice to future Big Brother contestants everywhere- don't let your emotions get in the way of your game.

Janelle was shown to be an amazing gamebot, never sad, never happy, always in game mode. She shed that to deal with the Wil situation- as she gave him some advice for the endurance competition, Wil took it as her condescending him. Basically, he came off as totally bitchy and ungrateful for her giving him safety this week. She should have traded him to Dan and been done with it.

Wil talked to Joe who talked to Ashley who talked to Janelle who talked to Wil about it, and cried some fake tears to get Wil to trust her again. He followed suit, calling her bluff but telling the camera he still didn't trust her. She's going to have to watch her back if she wants to make it by unscathed.

Dan, too, told his player Danielle to be cutthroat and leave all things Shane out of the picture. I don't think she's going to be able to do that, which makes it good for Dan that this twist came about when it did. I also have to applaud Dan for lying so low in the grass these past few weeks. There truly are some great, diversified players among the coaches.

The segment spent on Frank's daddy issues with who appeared to be Mickey Rourke's inspiration for The Ram in The Wrestler didn't offer much insight, but set the stage for a Celebrity Big Brother if they ever come calling. Imagine the fight between Sid Vicious and Russell Hantz? Ratings gold.

Finally, twist time. We all knew "America" would be inviting the coaches to enter the game, and obviously at least one of them would press the "Reset" button. But the rest of the ramifications came out like a ton of bricks. If nobody pressed reset, some sequestered houseguests would be given the opportunity to return to the game. If anybody did, there would be no vote, and Joe, Frank, Shane, all the coaches and the rest of the bunch could play in the endurance HoH.

America was in. Britney was in. Dan and Janie were in. It didn't matter that Boogie passed it up, he knew at least one of the others would subscribe. And just like that, Frank was spared another week.

Now we're left with 12 players in the beginning of Week 4, and I couldn't be more excited. All the coaches are in it to win it, as are Frank, Shane and Ian. Wil has potential, but after his diva-like antics tonight, he's not making any friends. Danielle is trying, but she can only pull a Jordan-like win, and she's nowhere near as likable as Jordan. Jenn is a non-entity.

Was this whole coach scenario an excuse to give some of the favorites a few weeks of safety before entering the house? Absolutely. Do I care? Not one bit. It turned the game way more strategic, and will make things even more complicated now that coaches and players are all in the same league. I can't wait to see how it all plays out!

Winner Prediction: Janelle (she's got a huge target, but if anyone can overcome it, it's my Jedi Janie)
Next Evicted Prediction: Mike Boogie

I'll update the Live Feed section for a little while longer tonight then post the endurance winner tomorrow. As of 11:30, only three people have dropped off. This could be a long night, folks.

By 11:00 PM, Jenn, Boogie and Joe were all out of the competition. Everyone else is still hanging in there. I'll update until I fall asleep!
11:42PM Ashley falls out
11:44PM Dan gives up and leaps off
12:07AM Frank falls off after much struggling
12:36AM Shane and Wil jump off together. How cute.
12:40AM Janelle is out
1:08AM Ian drops, guaranteed safety from Danielle and Brit
1:09AM Britney drops, guaranteed safety from Danielle
HOH GOES TO DANIELLE
Posted by Dual Redundancy at 8:40 PM