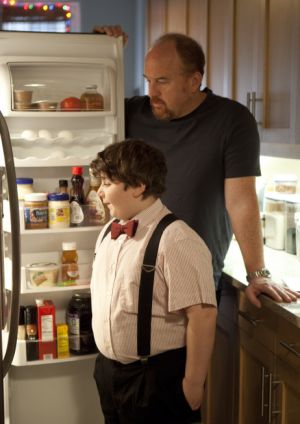 He gives us characters that we can relate to. We all have a Barney Ross in our lives, that one guy who everybody hates because he's a jerk and he treats you like crap and he steals and bounces checks and invites you to a boat he bought with Robin Williams' money. We also have Nevers, that kid who you can't say "no" to (ironic), raised by the anal-retentive, overbearing mother who thinks he can do what he wants because he's just plain special. As it turns out, being hated by others is no big deal, because somebody out there loves you for who you are. You're really despicable when your fault isn't being hated by others, but too loved by yourself, a problem I don't think Louis CK ever had to face.

Louie attended a funeral for a fellow comedian, Barney Ross, and the only other person in attendance (aside from Curb Your Enthusiasm's J.B. Smoove in the tag) was none other than Robin Williams. Louie and Robin had lunch and shared stories about Barney, who was Robin's ex-brother in law. It was  a relief when both could talk openly about how much they despised the man, listing the grievances he had caused over the years. This scene was fantastic and reminded me so much of the conversations in Good Will Hunting, one of my all-time favorite movies. Robin Williams just has an effortless conversational ability that doesn't even come across as "acting". I'm so glad he decided to do this show, and I'm glad news of his appearance didn't leak out.

Anyway, Louie and Robin reminisced about Barney's attempts to lure them to a strip club called Sweet Charity. Neither man ever went, nor knew someone who had gone, but in that moment they decided to see what the place was like. It was your run-of-the-mill strip joint, but Louie and Robin weren't there to participate, just observe. When Louie told them they were there in honor of the deceased Barney Ross, what followed was storytelling perfection. The strippers began to cry, and when the DJ heard the news he blared "Sister Christian" in honor of the "good, generous man Barney Ross."

Louie and Robin left, then laughed in unison. Were they wrong about Barney? No, how could they be. But were the strippers and company wrong? No, that doesn't make sense either. Everyone wears different masks for different people. Who the real Barney was, we'll never know, and neither will Louie. But that guy you think is the most disgusting piece of garbage may have a loving support group of people down at the strip joint.

The next vignette was nowhere near as perfect as the first, but still had its moments. Louie and his daughter planned on some one-on-one time without the younger sister, until a bizarre mother of one of Lilly's equally bizarre classmates asked Louie to help her out so she can go to her emergency elective vagina removal. Yes you read that right. So Louie took the kid, "Never", under his wing against Lilly's wishes, but didn't expect his needs- you cannot tell him "no", and you cannot feed him anything with carbon. Also, you can't leave him unattended for more than a few seconds, as he'll get into all sorts of trouble- like pushing a stroller into traffic or throwing your rug out of a window. Or worse.

Louie tries finding food for him- peanut butter will kill him. Apples will kill him. He doesn't like carrots. He is accustomed to raw meat in a bowl, though. These eccentricities (or, as Robin Williams' character in Good Will Hunting would say, "idiosyncrasies" that only those we let get close know about) make Never a larger-than-life character, but the kid pulls it off. The show has flirted with the limits of willing suspension of disbelief in regards to the realness of its characters, but never quite crossed it (Parker Posey was close last week). Maybe it's just because he was a chubby little kid that I forgave the craziness.

Louie got a call from his teenage agent, who booked him a phone call with a radio station in Kansas City, right as Louie was putting Never into a bath (Never's idea, not Louie's). Louie had bad experiences in Kansas City before and this phone call would help increase his ticket sales. Louie shut the door on Never and took the call.

This was the weakest part of the episode, for me. They needed to get Louie away from the bathroom long enough for The Incident to occur, but making fun of shock jocks has been done on everything from Family Guy to Parks and Recreation's "Crazy Ira and The Douche". I'm sure we all saw Louie's joke not being taken the right way by the immature Kansas City folk. Whatever, it filled the time and was entertaining, but not all that original is all.

By the time that the call ended, Lilly arrived to tell Louie she smelled something nasty coming from the bathroom. Of course, our minds jump to the Mad Men expectation, but what we got was way, way worse:

"I diarrhead in the tub."

Louie uses some of the most subtle humor out there, but he isn't too highbrow to steer away from poop jokes (see "Pregnant", the episode he submitted for Comedy Writing at the Emmys). He brought it all home in the end with the conversation between Louie and Never. Louie tries to say that he can be there to talk, knowing how crazy his mother is. Never complains that Lilly doesn't like him, and Louie notes that as long as he does weird stuff, nobody will ever like him.

His response is classic: his mom tells him that "any choice he makes is okay because he loves himself". There we go- the vignette was a stab at this generation of touchy-feely, everyone is special, participation award, elective vagina removal crazies. Loving yourself, CK shows us, is not necessarily a good thing. It's okay for Louie, though, because we love him.