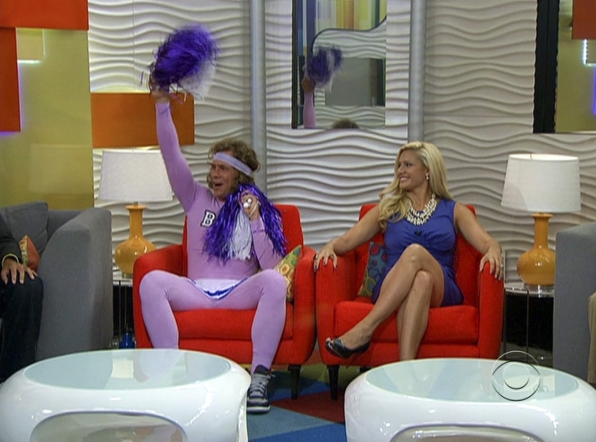 ML- I have two apologies to make before I get started: One, this is extremely delayed, on account of having to travel to Los Angeles for the semester. Two, the Veto episode review was extremely emotionally-charged on account of being so angry at the move.

I truly feel as though I've gone through the 5 stages of grief with the Janelle elimination.

First was Denial: The reports were wrong. Janelle wasn't the target. She wouldn't go home over Frank.

Bargaining: The "Save Janelle" campaign and all the pleading to Alison Grodner and the production to save her.

Depression: I was literally in a funk the night of the eviction.

Acceptance: Now, I'd say I've come to terms with it all.

All in all, Danielle made a bad move. She should have put personal feelings aside and formed a 6-person with Dan, Shane, Britney, Ian and Janelle. Frank and Boogie are too strong, too flaky and will not forget her and Dan's earlier betrayals.

Instead, she removed someone from the house who had no allies. Boogie totally took over her HoH, and I have to respect him and Frank for it.

The best part of the episode, which will surely be remembered for years to come, were Janelle's comments to Boogie's obnoxious goodbye message.

Janie put her backing behind Dan, because she loves him, but felt Boogie was too much of a threat to win it all. I'd put my backing behind both of them, as well as Dr. Will's pick Ian and my original pick (who I shouldn't have strayed from) Frank.

The next HoH competition, Battle of the Bands, was "knockouts"-style where two people would identify the challenge described in the lame original song.

The order of elimination was Jenn, Joe, Wil, Shane, Ashley, Dan, Boogie and Ian, leaving Britney and Frank for the final round. Frank beat Britney, further proving the point that Danielle made a dumb move.

How will Frank's HoH week go? Find out in the next blog, which should be up later tonight!

Posted by Dual Redundancy at 6:14 PM